DETROIT (March 16, 2021) – Corvette Racing seeks the second leg of sports
car racing’s Triple Crown this weekend as it heads back to Florida for the
Mobil 1 Twelve Hours of Sebring presented by Advance Auto Parts.


The two-car team is coming off a 1-2 class finish in Rolex 24 At Daytona to
start its 2021 season. Antonio Garcia, Jordan Taylor and Nicky Catsburg were
winners in the GT Le Mans (GTLM) category of the IMSA WeatherTech SportsCar
Championship in the No. 3 Mobil 1/SiriusXM Chevrolet Corvette C8.R. They
were only a handful of seconds – 3.519 to be exact – ahead of No. 4 Corvette
teammates Tommy Milner, Nick Tandy and Alexander Sims.


That puts Corvette Racing and Chevrolet 1-2 in the early-season GTLM points
standings. The No. 3 Corvette group leads over the No. 4 C8.R in full-season
points, but the positions are switched in the Michelin Endurance Cup. The
four-race championship is made of IMSA’s four long-distance races with
Milner, Tandy and Sims claiming the most points at the pre-determined marks
of the Rolex 24. Sebring serves as the second round of the MEC.


All signs point toward Corvette Racing contending for its 13th victory at
Sebring International Raceway and 12th in the annual 12-hour enduro. The
program’s last two Rolex 24 victories in 2015 and 2016 led to race wins at
Sebring only weeks later.


The Sebring 12 Hours is steeped in Corvette Racing history. The event has
witnessed the team take 11 class victories since 2002, and four of the six
drivers have previously won there. Garcia is a three-time winner with
Corvette at the event, and Tandy has won the last three years at the 12
Hours. Milner has three Sebring wins with Corvette – two in the 12 Hours
plus July’s sprint race – and Taylor was part of one overall winning effort
in the 12 Hours.


This is the third race at Sebring for Corvette Racing and the WeatherTech
Championship in the last nine months. The team finished 1-2 in July’s
Cadillac Grand Prix of Sebring with Tommy Milner and Oliver Gavin winning in
the No. 4 Corvette C8.R. Garcia and GTLM pole-winner Taylor were second on
their way to the GTLM Drivers, Manufacturers and Team championships; Garcia
also was the GTLM pole-winner for November’s 12 Hours.


The mid-engine C8.R and Corvette Stingray street car were developed
simultaneously, and the race car and production vehicle share more
technology and parts than any previous-generation Corvette. When initial
Corvette C8.R design and development work began more than six years ago,
Corvette Racing engineers worked closely alongside Corvette production
personnel with a heavy emphasis on wind tunnel and simulation testing.


The Chevrolet Motorsports Display opens at 9 a.m. Thursday, 8:30 a.m. Friday
and 8 a.m. Saturday in the Sebring Midway. Numerous Chevrolet vehicles and
other highlights include:


• Coupe and convertible models of the mid-engine Corvette Stingray.
• Additional Chevrolet products such as Blazer, Silverado, Tahoe and the
Bolt EV.
• An opportunity to receive a Team Chevy t-shirt via a QR code scan.


The Sebring Skidpad outside of Turn 17 can sample a Chevrolet vehicle for
themselves at the Ride and Drive event. Starting at 9 a.m. each day,
spectators have the chance to test a wide variety of Chevrolets include
Tahoe, Camaro, Bolt EV, Blazer, Trailerblazer, Colorado and Silverado.


The Mobil 1 Twelve Hours of Sebring is scheduled for 10:30 a.m. ET on
Saturday, March 20. The race will air on NBCSN from 10 a.m.-noon and 7-10:30
p.m. ET. The full race will be streamed on TrackPass via NBC Sports Gold and
the NBC Sports App. IMSA Radio will air full qualifying and race coverage at
IMSA.com along with Sirius 216, XM 392 and SiriusXM Online 992.


ANTONIO GARCIA, NO. 3 MOBIL 1/SiriusXM CHEVROLET CORVETTE C8.R: “Getting the
Rolex 24 win is the best way we can start the season. We now have that
elusive endurance win for the Corvette C8.R. Naturally we want the next win
to be Sebring. This always has been a fantastic event for Corvette Racing.
We have completed many miles in testing, practicing and racing. I feel like
I’ve been over every bump around the circuit! The 12 Hours is always a
really big challenge for what lies ahead of us for the balance of the year.
This is another excellent chance to test ourselves.”


JORDAN TAYLOR, NO. 3 MOBIL 1/SiriusXM CHEVROLET CORVETTE C8.R: “The Sebring
12 Hours last year was crucial to the success we’ve already had this year.
Development-wise from a performance point of view, we learned a lot of stuff
throughout that weekend. Sebring is a great test track. From a reliability
and durability point of view in 2020, an endurance win was the only thing
missing. The Sebring 12 Hours last year set us up perfectly. It pointed out
some of our weaknesses and things we needed work on. It forced us to do that
and learn and develop. Already in 2021, that’s showing in our success at
Daytona. It’s exciting for us to start the season so strong that like, and
it gives us more confidence going into Sebring.”


NICKY CATSBURG, NO. 3 MOBIL 1/SiriusXM CHEVROLET CORVETTE C8.R: “It will be
a thrill going back to Sebring again after a few visits in recent months. I
feel like the Corvette continues to get stronger but there is nothing you
can take for granted at Sebring. It is the hardest, most physical 12 hours
of racing we will do this year. The bumps, the layout of the track and the
heat this time of year can take a lot out of a driver. But I personally feel
very prepared just like everyone at Corvette Racing. Even though we finished
1-2 at the Rolex 24, we all feel like we have something to prove again at
Sebring.”


TOMMY MILNER, NO. 4 MOBIL 1/SiriusXM CHEVROLET CORVETTE C8.R: “To be honest,
this feels normal… going to Sebring in March for the 12 Hours. That feels
normal to us. It doesn’t feel weird going back already. We’re not too far
removed from the 12 Hours, but there have been quite a few changes for us
with new drivers and a renewed push on the engineering side to buckle down
and tighten up all the issues we had in November. One thing we always do at
Corvette Racing is learn lessons from the past and use those to improve
ourselves. Daytona obviously was a strong race from both cars and the team
as a whole. The cars were quite reliable on all fronts. With two new
teammates, it’s all very different driving with Alexander and Nick. They
both have so much experience at big events like Sebring that it doesn’t feel
like a big change from the driving aspect. We’ve had a couple of tests at
Sebring with everyone, so it should be business as usual for everyone once
we get to the race.”


NICK TANDY, NO. 4 MOBIL 1/SiriusXM CHEVROLET CORVETTE C8.R: “I’ve won the
last three 12-hour races there and hope to keep that going to make it a
fourth. The first few times I raced the 12 hours, it wasn’t my favorite
event because we never got on particularly well. Recently, it just seems to
be a race that has come to me at the end of it. There have been situations
and circumstances that suited me, along with a bit of luck. Being able to be
around to pick up the pieces and be quick when needed is key. I’m hoping to
bring some of that magic and use it this year.”
“The thing about Sebring is that it is the toughest track on man and machine
that we go to. It’s normally pretty hot that time of year. Starting in the
day and going into the night makes it a long race. What has made it special
to me is the people that are there and the ones that create the atmosphere
around Sebring. It’s been one of the most fun events I’ve competed at over
the years.”


ALEXANDER SIMS, NO. 4 MOBIL 1/SiriusXM CHEVROLET CORVETTE C8.R: “Sebring is
one of the big events that I have looked forward to since joining Corvette
Racing. The track and event have a fantastic history, and the fans there
create a great atmosphere. It’s a shame we can’t interact with them like
normal but hopefully that day is coming soon. The race itself is one of the
toughest any driver can do around the world. It’s an absolutely brutal lap
around Sebring but also one of the most memorable the times you get it
right. The bumps and tarmac changes present challenges you don’t find
anywhere else in motorsport. It will be good to get back there.” 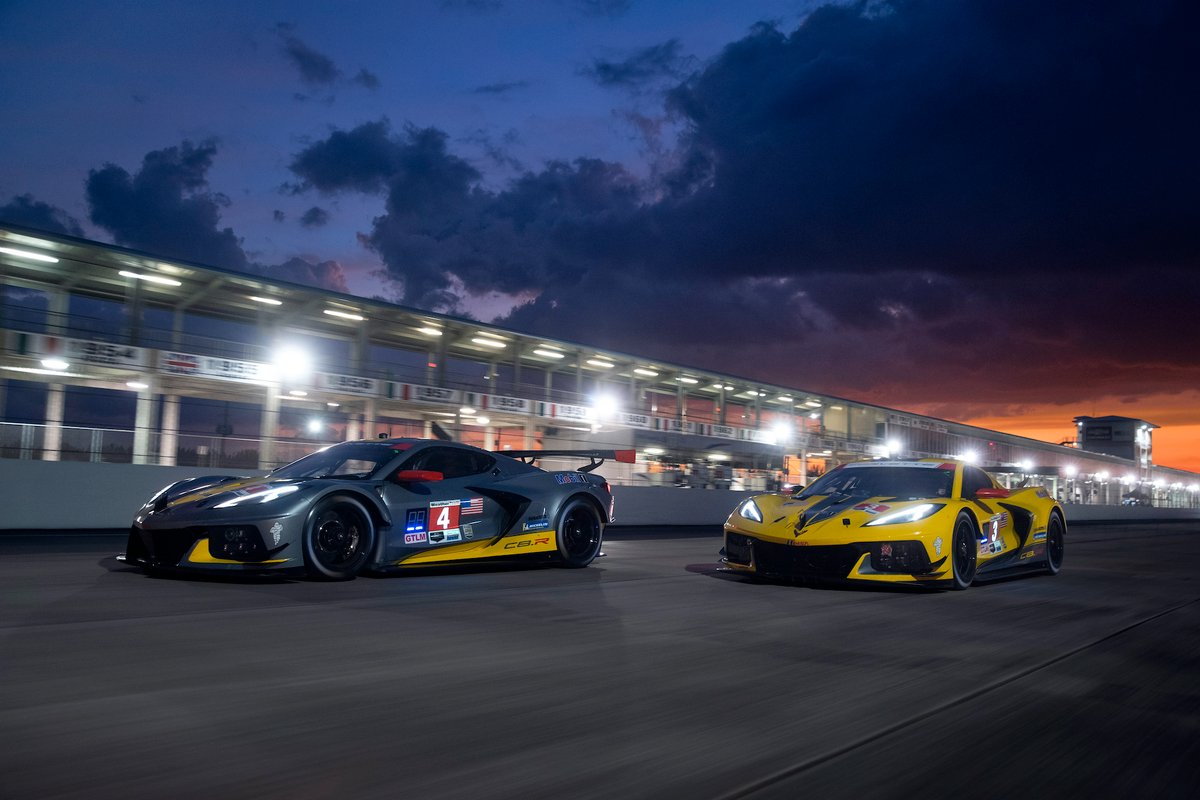