PRESS RELEASE:
Garcia, Magnussen third just ahead of Gavin, Milner in No. 4 Corvette


CORVETTE RACING AT VIR: Back on the Podium for No. 3 Corvette
Garcia, Magnussen third just ahead of Gavin, Milner in No. 4 Corvette


The duo in the No. 3 Mobil 1/SiriusXM Chevrolet Corvette C7.R recorded their
fourth straight top-three finish at Virginia International Raceway on the
heels of victories in 2016 and 2017 and last year’s runner-up result.
Corvette teammates Oliver Gavin and Tommy Milner were right behind in the
No. 4 Corvette C7.R, their best result since a third-place finish at Long
Beach in April.


The result moved Garcia and Magnussen back into third place in the GTLM
Drivers Championship with two rounds left in the season. The two Corvettes,
lacking overall pace to the race-winners, were part of a thrilling battle
inside the final 30 minutes for the final podium spot.


Both Corvettes opted for three-stop strategies following an early-race
caution that saw all GTLM cars pit just 22 minutes in. Magnussen – who
started second and Gavin – who started fifth – each drove double-stints to
start. Gavin, who gained two spots on the first round of stops thanks to a
speedy tire change and fuel fill, was the first GTLM driver to make his
second stop an hour into the race.


Magnussen handed over to Garcia 20 minutes later and was part of a tight
fight with Dirk Mueller in the No. 66 Ford in the midpoint of the race. It
was a close battle with the two cars making contact at the end of the
backstraight but both got away relatively damage-free.


The two Corvettes and the two Fords were nose-to-tail following the final
round of pit stops with 35 minutes remaining. Garcia made a daring move at
Turn Four to move back into the podium, and Milner followed him through by
overtaking both Fords a couple of corners later.

ANTONIO GARCIA, NO. 3 CHEVROLET CORVETTE C7.R – FINISHED THIRD IN GTLM: “It
was a strange race. I don’t know if we had anything for the Porsches. There
was a lot going on in both stints. Initially the power was good and I could
gap the Fords. But at some point after that, I had a strange feeling that
felt like understeer. Then I realized I was having to give more right-turn
input than left. There was probably something going on there but not due to
the contact with the 66. Once I realized it wasn’t the tire going down, I
could get in a rhythm and it seemed to work. It’s unfortunate to have
contact with Dirk (Mueller). I didn’t want to have that, but once you’re
that close. I locked up completely and was over the curb trying to avoid
him. That took away a little of the gap I had over the other cars but still
had time to dump grass out of the radiator after that off. It was super
tight the rest of the way and was fun. It’s not a win but we will take a
podium.”


JAN MAGNUSSEN, NO. 3 MOBIL 1/SiriusXM CHEVROLET CORVETTE C7.R – FINISHED
THIRD IN GTLM: “A podium is great for the championship, but we are so hungry
for a win. The team did great this weekend. The car was solid all the way
through. We had an exciting qualifying yesterday. Good racing today. There
was a small miscommunication between Antonio and Mueller but they both came
back from that. On the podium is great but we want to win. A fantastic
weekend.”
(Being aggressive on strategy in attempt for IMSA Win No. 100) “It is not
due to lack of trying. We are there. We are right where we need to be.
Unfortunately, we miss out just a little bit. Today we didn't leave anything
on the table. We will just have to find a little bit more if we are to win
one of these pretty soon. I’m super happy with everything the team has done.
The preparation of the car, the strategy, execution of the pit stops.
Everything is fantastic. It’s just not enough for winning.”


OLIVER GAVIN, NO. 4 MOBIL 1/SiriusXM CHEVROLET CORVETTE C7.R – FINISHED
FOURTH IN GTLM:“We battled hard today. I don't think we had as fast of a car
there at the start as the sister car. We seemed to be working the rear tire
pretty hard and that bit me a little bit. But we made some changes and the
track rubbered in so that started to help Tommy a little. There was plenty
was action like there always is here. Lots of cars defending hard and racing
hard. This track has so much grip sometimes and there is only one line.
Trying to pass people can get frantic. In the end it kind of worked out our
way a little bit. We've been on the on the receiving end of it a few times,
but today we benefited a little bit from some other people's aggressive
racing. It was good to get fourth place and to get the 3 Corvette on the
podium. But we are so desperate for a win. It's crazy how long it's gone.
It would be fantastic to get a win at some point before the end of the year.
The guys at Corvette Racing certainly deserve it. They worked super hard
through that last-minute engine change Saturday before qualifying. That got
us a starting spot further up the grid than we would have been if that
hadn't been done just before qualifying. The pitstops today were excellent;
the guys did a great job and the strategy worked out for us. It's positive
as we move toward Monterey. We can actually start chipping away to get in
the top-three. To get that win would be amazing.”


TOMMY MILNER, NO. 4 MOBIL 1/SiriusXM CHEVROLET CORVETTE C7.R – FINISHED
FOURTH IN GTLM: “All-in-all it was a good day today. Really at the end, we
made the right strategy calls. We needed to work on the car a little bit
throughout the race, and made good changes. Fourth place isn't what we come
here for, but I think based on how the race played out we can be pretty
happy. I know Olly struggled there in his first stint with his tires; with
that in mind, I was careful with them in my first stint and that may have
hurt me in the end. So we made a change and tried to improve all of it
essentially. At that point, knew what to expect from the tires as well. My
second stint was quite a bit better than my first I felt. Of course, that
was a fun pass there with the two Fords that were fighting pretty hard.
All-in-all a good day for the team. We still have some work to do for sure
but I’m proud of the team and the effort all weekend. We've definitely had a
rough year. Having races like we had today where maybe it wasn't perfect,
but everybody did a great job today. Sp two to go. We will try and get a win
before the end of the year.” 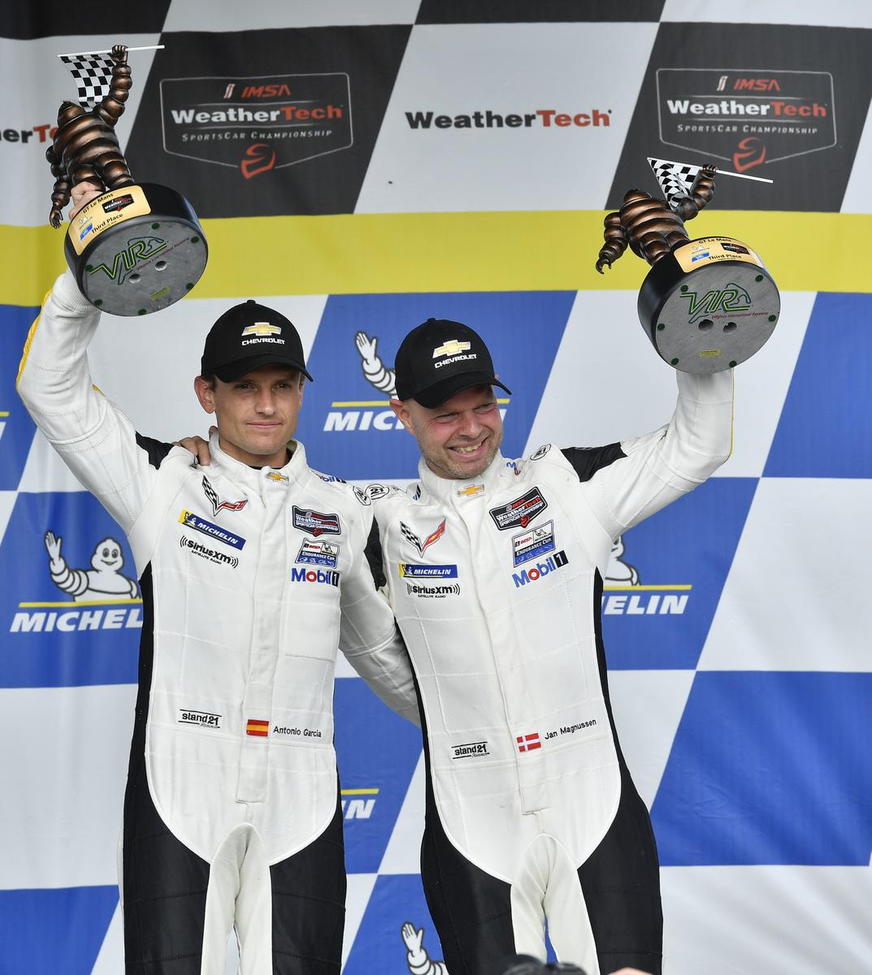