Corvette Racing’s new Chevrolet Corvette C8.R finished its maiden race with a fourth-place finish in the Rolex 24 At Daytona

Antonio Garcia, Jordan Taylor and Nicky Catsburg led the team’s effort Saturday and Sunday in the No. 3 Mobil 1/SiriusXM Chevrolet Corvette C8.R, which had a mostly trouble-free run in its competition debut. The trio completed 785 laps for 2,794.6 miles – the greatest distance for any Corvette entry in Rolex 24 history.

The No. 3 C8.R led twice and was in contention for victory in its first race for the majority of the 24. The performance showed the potential of the mid-engine Corvette, which was developed simultaneously with the 2020 Corvette Stingray.

"It was a tremendous honor to debut the Corvette C8.R at the Rolex 24 Hour at Daytona – 22 years after we debuted the C5-R in the same location,” said Jim Campbell, US Vice President Performance and Motorsports. “I'm so proud of our team and how they prepared and executed the race with the 2020 mid-engine Corvette. I can't wait for the rest of the season and watch the excitement from our fans grow with every race."

The No. 4 Mobil 1/SiriusXM Corvette C8.R of Oliver Gavin, Tommy Milner and Marcel Fässler underwent multiple trials Saturday and Sunday, but the trio ultimately finished the race as well. While things looked optimistic in the first eight hours with the team racing inside the top-five, an oil leak near the ninth hour forced the No. 4 Corvette into the garage for extensive work. Complicating matters, the leak was in an area that required the team’s crew to remove the engine in order to make the repair.

Diligent and non-stop work for nearly nine hours brought the Corvette back into the race with the aim of evaluating tire settings and setup options to help the No. 3 for the end of the race.

“The Rolex 24 At Daytona is a demanding race, so to even finish here with a brand-new car with a brand-new engine is a major accomplishment,” said Mark Kent, Chevrolet Director of Motorsports Competition. “To have both of the new Corvette C8.Rs finish – and one of them nearly finish on the lead lap – is a tremendous reflection of the strength of this car and this program.”

Corvette Racing’s next event is the Mobil 1 Twelve Hours of Sebring Fueled by Fresh from Florida on March 19-21 at Sebring (Fla.) International Raceway.


ANTONIO GARCIA, NO. 3 MOBIL 1/SiriusXM CHEVROLET CORVETTE C8.R – FINISHED FOURTH IN GTLM: "I'm proud that at least one car finished near the lead lap. For sure every time out we want to win and do the very best possible. Today, this was the best possible result. Probably we didn't have enough pace to be on the podium or to win. Once we lost track position and not having many yellows, we had to react to that and be aggressive on the strategy. A yellow would have put us a little ahead and maybe given us a chance to fight. But I'm proud that we gambled and tried to do better than what we actually might be. Instead of being comfortable with fourth, we went to try and win it. I'm very happy the Corvette C8.R went across the finish line for the first time. It wasn't a win, but I'm sure that knowing how it reacts and how much room there is for development, this Corvette will be a winning machine before long."

JORDAN TAYLOR, NO. 3 MOBIL 1/SiriusXM CHEVROLET CORVETTE C8.R – FINISHED FOURTH IN GTLM: "I think it is impressive to have a finish like this. It's always difficult with a brand new car and limited testing to go 24 hours without issues. That's a testament to the team, Corvette Racing, Pratt & Miller, the Corvette brand and everyone that is behind this program. It's a good start to the season. Obviously we wanted to be on the podium or win the race, especially when you have a flawless race. If you would have told us two weeks ago that we would have no issues all the way through the race, we would have taken that all day long. I'm excited for the rest of the year."
On Wayne Taylor Racing’s overall victory: "Obviously that is a great team. This is their third win in four years and only one year without finishing on the podium. It’s an incredible team and incredible victory. A lot of good guys on the team are like family. I'm very happy for them.”

NICKY CATSBURG, NO. 3 MOBIL 1/SiriusXM CHEVROLET CORVETTE C8.R – FINISHED FOURTH IN GTLM: "There isn't much to be disappointed about. All the people that worked on this Corvette, tested the car, developed it... they can be proud. To come to Daytona for the first time with a car this new and being in contention to win for a long time is quite remarkable. I've seen it happen in a very different way in the past. It's something to be proud of. It's not so nice to finish just off the podium in P4. But we can be happy with this first event. We have some time and work to do in order to improve for Sebring. From my personal standpoint, this is a great team, a very nice car and very nice people. I really enjoyed it. Personally, I'm somewhat in the middle about my performance. I'm happy with the pace. There were some small mistakes that shouldn't have not have been there. But in the end, we can all be quite happy."

OLIVER GAVIN, NO. 4 MOBIL 1/SiriusXM CHEVROLET CORVETTE C8.R – FINISHED SEVENTH IN GTLM: "Today has been a huge learning experience for everybody at Corvette Racing. Whenever you do a race of this magnitude against the competition we have in our class, you have got to learn stuff. There is nowhere to hide. There are no ifs, buts, maybes. It is the truth. We come here with a very fast Corvette, a car that has been developed well. But there are some things we need to go away an work on. You just look at the desire, the will and the drive of the guys to get the car fixed and back out there on-track. They worked some eight hours to fix that oil leak that we had. It’s amazing to see that these guys that have been working so hard for so many months, on getting this program up and running and ready. Then testing and then ready for here at Daytona, then put in a shift like they did today. It is pretty humbling. It is a testament to the drive and desire of everyone at Corvette Racing."

TOMMY MILNER, NO. 4 MOBIL 1/SiriusXM CHEVROLET CORVETTE C8.R – FINISHED SEVENTH IN GTLM: "Obviously we're disappointed with our day, but can't be too unhappy. We've had a lot of fun getting to this point for the debut of the new Corvette C8.R. A lot of hard work went on today and yesterday. It hasn't gone as we would have wished, but the car is brand new after all. This is why we go racing and why we compete in races like this. It's a true test of man and machine. We use every opportunity whether it is a race or a test to improve ourselves and the cars.
“We learned a lesson today about the car, and the Corvette Racing guys will make some adjustments to make the car even stronger. The team can be proud of what the car has shown today. The No. 3 guys were in the hunt for the win almost all race. For us and the Corvette fans, there is obviously a bright future for this new Corvette C8.R."

MARCEL FÄSSLER, NO. 4 MOBIL 1/SiriusXM CHEVROLET CORVETTE C8.R – FINISHED SEVENTH IN GTLM: "In general, our race started very positive. We were taking care of the car and conservative. Going into the race, we knew we should save the car until two or three hours before the end. We were pushing as hard as we needed to but not over the limit. It was going smooth until the oil leak. For sure it's a pity, but we know everything is brand new and some of these things can happen. The positive side is that we know the other Corvette is running well without any issue and is very good. It is positive too for the next races. It's too bad that it was our car that had an issue but that is racing. We will get over it, improve and be better for other races where we can still perform like we can." 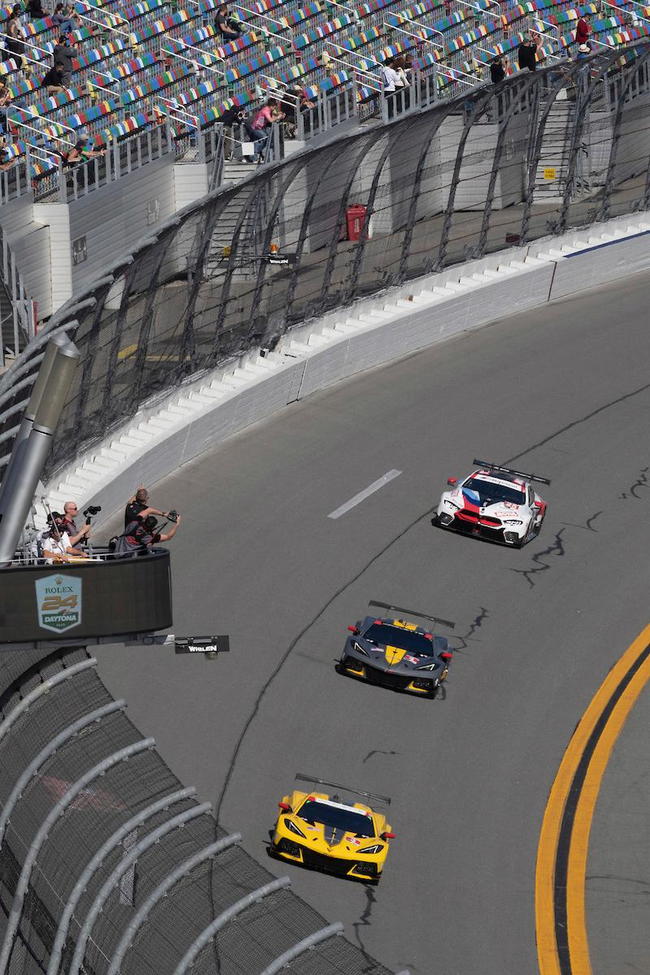