I've got an '07 C6 coupe, and it was fine after I bought it from a private party 8 mo. ago, but in the history of the car per the VIN # nobody owned it for more than a yr. Now maybe I know why. It had 34K mile on it when I got it and I put about 3k on it and then the cherping started. A Vette shop told me it was the harmonic balancer separating and wanted $800 to install a new one and the Chevy dealer said $1200 to do the same. A Vette owner friend ref'd me to a local small shop where the mgr. was VERY good a solving problems, and he took a look and decided to put a different serpentein belt on, problem solved, (charged me $120) he saved me $1000, turns out he's one of the last honest mechanics in Orange Co. Ca. Now when I start it up if it's been sitting for 2 or 3 days (it's a 2nd car) the squeaking/cherpping is back. I took it to my guy, and it did look like the HB was vib. just a little. He changed the tensioner arm...same problem, still cherpping. Then he put on a new belt, same mfgr. same pt. # and suddenly it sounds like a nut came loose off of a bolt inside the balancer and is banging around inside ONLY WHEN YOU START IT UP OR SHUT IT OFF, then it quits. So, we put the old belt tensioner back on. The only thing we changed was the belt, so we put the old belt (slightly more stretched) back on and NO CHERPING, NO NOISE AT ALL. We came to the conclusion that with a newer slightly smaller belt that put more tension on the main crankshaft pulley (even though it was the same part #'d belt) it caused this knocking/clanking sound at start up.
I asked GM through phone calls and Emails, "How can you put such an important device on a vehicle that doesn't last close to the life of the car, or at least more than 40,000 miles and is so expensive to repair?" Their reply was "Sorry it's over the 25K mile warranty?" On other forums I read that there are certain serp. belts that work better than others. So...before you go spending a ton of $$$ on repairs I suggest trying a different manufacturer's (besides the OEM) belt. I guess you just have to crack it up to "This is what you get when you own a performance auto". Hope this helps in some way. GOOD LUCK!
Last edited: Aug 15, 2014 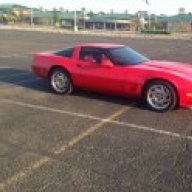 Just a side note, I had a car and a truck with similar issues, both Chevys. Both times, chirping when first started and again when shutting down. I found the problem was a cracked flex plate. The truck got a new one and has been fine ever since. The other one was a small block in my Monte Carlo SS, again no more problems. Just my .02 cents.
K

As they are a known weakness, I bit the bullet and replaced mine with an ATI for a little less than $300. As Forrest Gump said "one less thing."
Whoosh, and blur
S


Bb84ss454 said:
Just a side note, I had a car and a truck with similar issues, both Chevys. Both times, chirping when first started and again when shutting down. I found the problem was a cracked flex plate. The truck got a new one and has been fine ever since. The other one was a small block in my Monte Carlo SS, again no more problems. Just my .02 cents.
Click to expand...

What's a FLEX PLATE and where is it?

slick vector said:
What's a FLEX PLATE and where is it?
Click to expand...

The flex plate is bolted to the crankshaft, the torque converter is bolted to that, if there's a crack you will hear a chirp or almost something like a rod knock.
You must log in or register to reply here.