How I fixed ALL my crazy electrical issues! And...you can too!! 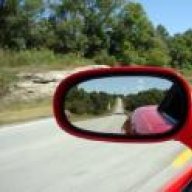 Beginning in early 2012, I started getting the following DTC's on a consistent basis, which left my car without the HVAC and F45 electronic suspension working...as well as ABS and Traction Control warning lites on the dash display. At first the problems would come and go, then the functions quit completely last summer.

As you can see, I had 3 modules with no communication at all with the car!

For over a year, I've been studying my GM service manuals, reading posts when I could and asked every C5 owner at car shows if they had similar issues with their cars. I definitely learned the most from a post started by Bill Curlee on the CF. Finally this spring I talk to an owner who said his HVAC quit on him and he changed the ignition which fixed it. I also had a local non-dealer technician try to diagnose my issues but all he recommended after 1.5 hours of labor, with my assistance, was to r/r the EBTCM and BCM....very expensive!! I was not comfortable with that nor just throwing money and parts at my car without really knowing.... so I kept researching.

Then I read post that sounded like my problems, but instead of cleaning the ignition contacts as described by Bill Curlee. I opted to just buy a new unit....from AutoZone for $89. I'm 69 with bad knees but with a lot of mechanical experience, and have always done my own service on my Vettes and Blazer but I was sure nervous about this ignition repair and not knowing if it would really fix my issues. So finally...one recent Saturday I gathered up all my notes, ignition pics (inc.instructions from Vette Essentials) to r/r the console and IP center trim.... and headed out to my garage and disconnected the neg. battery terminal...and spent about 3 hours on this project. I took my sweet time so as to not break plastic parts and probably spent most of the first 1.5 hour learning the removal technique for each of the electrical connectors that had to be taken apart. Seems each one had a different method of removal...well maybe not, but it sure seemed like it! Once I actually got to the ignition, it was easy from there on, and I had it replaced and all the trim pieces carefully back together in 30-45min. I reconnected the neg. battery cable and started my car...praying it would all be back to normal functions again.....and it was!! I think I was actually surprised to NOT see that damn ABS and TC warning lite not ON, but to see my climate control HVAC temp reading again was the best thing since my a/c etc had not worked for over a year. After several test drives over that weekend, everything worked like a champ and it feels like I've got a brand new C5 again. What a great feeling and relief that it's normal again.

fyi....I took apart my old ignition and 3 of the 5 contacts were quite burnt or corroded.....just like the points in my old '56 Chevy distributor used to look like. I'll clean them and re-arch the tension in the spring arms and just keep it as a back up for now.

It's been over a month since I did this replacement and still no codes. I check after every drive. If I can do this.....you can too.


I'm totally with you- I can't stand replacing things and the problem still remains. Glad you got to the bottom of it- and that your hunch was right! 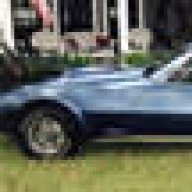 i am having some of the same issues you described. exactly what did you change? you said "ignition" what is the technical name or a part number? Where was it located? how much of the dash and console did you have to remove to get access to the part?
Thanks, I am going to put this on my list of parts to change to try and clear these damm codes. I just changed the AIR smog pump to clear a check engine light.
[SIGPIC][/SIGPIC]Member: NorthShore Corvette Club
1975 Convertible, steel blue,
2000 Convertible, lt. pewter

I can only assume he is talking about the ignition switch...you know, the thing you stick the key in.
2007 Atomic Orange Coupe Cashmere/black interior

Here you go buddy! I'd never removed anything from my cockpit before so I really took my time with the console r/r so I wouldn't break any of the plastic tabs on my 16 yr coupe. The key/tumbler resides in the black front end of the ignition device and is the only part you can see from the drivers seat. btw....I did all of these just sitting behind the wheel.....none of that crap crawling around on my back on the floor...under the dash! With the green plastic cover off the back, you can see the 5 mechanical contacts in the pics. 3 were burned/corroded on mine....which apparently were causing all my problems. It took about 2 years for my car to get this point. I was ready to sell it, but now it's like having a new car, and I haven't had one dtc code since July when I r/r that ignition part. Life is really good again!
This may not solve everyone's issues, but it sure fixed mine and has a few others too. The center console has to be removed to access the two bolts that hold the ignition to the dash structure. The ignition has two elec connectors on the back end that are removed blindly, but I had room for my hands to do it.
If anyone wants to talk about this, send me a PM with your phone number and time to call. I'm retired and home a lot.
Good luck. 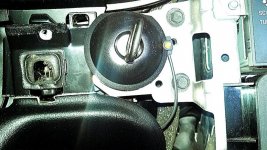 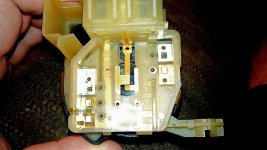 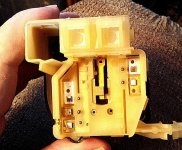 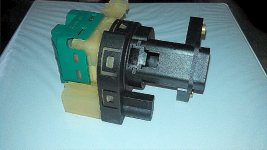 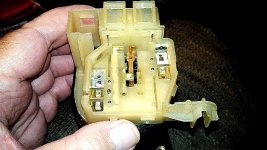 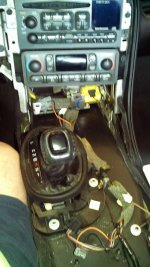 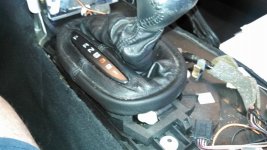 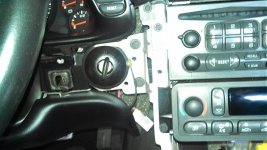 crause said:
Did the new switch come with new keys or do you reuse that part?
Click to expand...

The new part you are replacing is not the tumble and/or keys, just the goofy looking plastic part that fits behind the dash which the tumbler fits into. You use a small screwdriver to push in a release tab on the side of ignition part to remove your tumbler and key.... before unbolting the ign from the dash bezel. fyi...on the Corvetteforum.com there is a very specific "sticky" thread by Bill Curlee that has a ton of info about this total procedure......and other stuff too. I highly recommend you research that thread by Bill in the C5 Forum section.

I bought my new ignition at Auto Zone for about $90. There are also many Corvette catalogs that sell them too. Just google.