A couple months back I posted that I had solved an intermittant no-start condition on my 88 but now it's back.

ad The starter enable relay was found to be bad and after replacement everything seemed to be OK.

That was until Saturday when the darn thing did it again. When I turned the key I had power (dash lights, etc.) but no start. Not even a click from the starter. Battery is good. Checked it at 12.1 volts prior to starting and consistently had anywhere from 13.6 to 14.0 when driving. Stopped for gas when the thing wouldn't start. After calling the wife to come get me and trying several other times, it finally started after maybe 10 minutes.

It seems to me to be a VATS problem except I've got it bypassed. I verified that this works by unplugging the bypass and it wouldn't start. In fact it's exactly like when it doesn't start when plugged in. I know there's a timer involved if the VATS acts up but with it bypassed I don't think that has any part in the problem. However it does seem that after waiting 10-15 minutes it starts. So I think I've eliminated the VATS and therefore the ignition switch. I had the same thing happen about 5 years ago and had the starter and grounds checked and they were fine. So after 5 years now I'm having the same problem.

Starter seems to spin fine once it's got power. So what are my options? It could be several possibilities. Could it be bad battery cables? This no-start condition only happens after I've driven for a while so is it heat related? Could the starter solenoid be bad? I think there is an interrupt switch on the gear selector which might be a problem but I moved the selector out of park to drive and back several times with no luck. Maybe the starter enable relay went bad? At this point I hate to be just replacing parts without knowing what the problem is but I'm at a loss to figure this one out. I did check and the battery cable to the battery are tight. The other wiring to the terminal block behind the battery are tight.

Saw your note. I currently have an 02 Coupe but had two C-4s in my prior life and had the same situation with my 96 that you are now having. The problem for me was the starter. Before it goes, you will have the type of problem you are having when the starter is hot, when it cools down the thing will crank and start. The C-4s have had problems with starters really getting hot because of their location and the heat really wears them out. I replaced mine on the 96 when I had these symptoms and the problem was solved. If you get a new one, I have seen heat shields, I think in Ecklers or Mid America. You might want to check them out. Let us know what happens. Good luck. 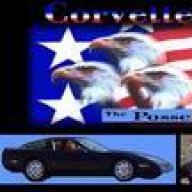 A friend of mine has the same problem on his '87. We found this possible fix over on corvette forum.

Just another wild card thought.
I had a similar problem with no start.
I ended up moving the selector to N and had no problem !
I still have the occasional problem but moving to N has always worked.
I know it's the Park/Neutral switch but until it fails completely I'm going to let it alone.
HTH

Just talked to my mechanic and they ran the problem down to a bad starter. Apparently when it was hot and I tried to start it the brushes in the starter were binding. Once it sat for about 10-15 minutes it cooled so that the brushes shrank enought that the starter would turn. I've read that this is a frequent problem with C4's. Bad new is the bill will be about $600. But that's the most money I've spent on it in about 5 years of ownership and I guess that's not bad for an 18 year old car. These guys have never ripped me off and I guess I might be able to find something cheaper but I feel confident with them working on my car.

Thanks for all the help.

That starter must have had gold contacts in it.....I just had the dealer replace mine in my 86 and the total bill was about $250 including the starter..total labor time was 1.3 hours at $85.00 per hour
Mike R

Yeah I thought it was a little high but I don't have a problem because the dealer takes real good care of me and the car. I priced the starter anywhere from $250 to $400. He charged me $340. The $260 to put it on I thought was high but I figure he took a loss the previous time I had the car in.

I'm willing to pay a little more if I get good service and so far these guys have treated me right.

If you've ever tried to replace a starter on one of these you'll pay any amount to get someone else to do it.
You must log in or register to reply here.