Just curious. How many of you have had the privilege of having one of those "Know-It-All" friends who has worked on your engine who ended up costing you more money after he finished working on it? I started out restoring my '77 over 2 years ago. I started with new interior stuff like the dash pad, seat covers, console, etc.

Because the 350 was all tired out, I started thinking about other options. A friend that I worked with introduced me to his brother-in-law and I heard all this stuff about how great a (backyard) mechanic he was. When I mentioned something to him (the brother-in-law) about rebuilding the engine, he suggested a 383 stroker. Sounded good. Whenever we sat around having a cold one and shootin' the bull about cars and engines, he would go off into techno-babble about horsepower, torque and the best combinations for making them. I'm thinking "This guy really sounds like he knows his stuff - sounds like a pretty decent mechanic". So we start discussing building a stroker. I got online and ordered a kit ($1500) and as money allowed, other things. Polished Performer RPM Air-Gap Intake, Dynomax Ceramic Coated Headers, B&M torque converter, Holley 750 vacuum secondary, Performer RPM heads, Polished Aluminum Stewart high flow waterpump, Polished Aluminum 140 amp Powermaster alternator, MSD Pro Billet Distributor, MSD 6AL box, Be Cool aluminum radiator with dual electric fans. As a matter of fact, he's got a 350 already bored out 30 over, so he's willing to just sell it to me for $200. So now I'm ready. He's like, "bring it over to the house man, and we can start putting the new engine together and then pull the old one, drop the new one in and probably have it done in a couple of weekends. Sounds great. I mean, I've done my share of working on engines, but never a build-up from the ground up. So, are far as the technical stuff, I'll be watching and learn as we go.

I was aware however, of the importance of things like degreeing a cam. When it came to installing it, I asked him about a degree wheel, and he was like, "nah, I'll just line up the dot on the cam with the dot on the crank and we'll be there". Okay, well he obviously knows what he's doing. Well we finally get it built and installed. He says, "well, lets drive it down here to the carwash and wash it off. Now, I'm also thinking about something in the back recesses of my mind that I'd heard at one time or another about breaking in the cam for so many minutes at so many RPMs. But hey, he obviously knows what he's doing.

Well, bottom line, the car seems to run like a dog. Just not the kind of power it should have - somewhere in the range of 400 to 450 HP. And I also have this pinging that I just can't get rid of. No matter how much I retard the timing. Then I notice a miss - spark from the plug wires is very intermittent. A friend tells me about an engine builder in town who's worked on his car. I drive it over to his shop and realize that something's just not right. I mean, aside from the fact that there's just not the power there should be, I keep smelling oil. When I get to the guys shop, I told him I was also concerned about the smell of oil on the drive over and the fact that it just didn't seem to have the power that it should, as well as the pinging. He pulled the intake off the next day and found some metal shavings in the lifter valley. He told me some other interesting news. Mr. "Mechanic" friend doesn't really know crap. I found out from the engine builder that this guy who helped me put the motor together installed the pistons upside down, i.e. they were turned 180 degrees off when he installed them on the rods. Therefore, the valve reliefs were positioned on the wrong side so that the valves were hitting the flat side of the pistons (mine are flat tops) instead of matching up and going into the reliefs. This caused the intake valves to all be bent and of course some nice nicking and gouging on the pistons. He also told me the block had been sleeved in #7 cylinder and the sleeve had actually been shoved up about 1/16". All in all, this know-it-all friend just cost me new intake valves, new pistons - oh yeah, I almost forgot. 2 of the rod bolts were finger loose and a 3rd one had already fallen off into the oil pan. This guy does some nice work, eh? 3 of the rods had some flat spots on them. Also, because he never broke in the cam, alot of the lobes were flattened down.

Sooooooo, now I'm springing for a new cam, rods and pistons. I told the builder the heck with it. I'm going with a roller cam, roller lifters, forged pistons and forged rods. At least this way, I know it'll be done right and I won't have to worry about it. This builder has a good reputation in town and guarantees his work. My only regret is that I didn't know about him before I let this "friend" screw with my engine. I know I probably shouldn't be so down on him, because it's my fault for trusting him. He talked big time and I thought he knew what he was doing. And he wasn't charging me anything to "play" with my expensive engine parts.

Should get the car back in a few weeks. Anybody else have any war stories they'd like to share? because I'd love to hear 'em. You know, misery loves company. Marc.

Sorry about your sitch there, Doc. I've had 'experts' give me their advice on certain projects that I knew they were full of it when they started talkin. When I first started out, 18, makin minimum wage and big aspirations, I decide to build an engine. I had a 4 bolt (350) block that was post 68, and a 327 that was pre 68 (when they changed the crank journal sizes) I knew they had the same bore, and the 350 had a bigger stroke. I decided I wanted to rebuild the 327 with the 4 bolt, using a newer, big journal crank. I also had a 307 crank that was of the newer style. I went to the auto parts store and had the guy look up the crank for a 307, then a 327, sure they would be the same part, which they were. Then he confirmed that (at the time) all small block rods were the same. So I then asked, 'if I use the 307 crank and the 350 block with my 327 guts, I'm in business, right?' Just as he's starting to say, yeah, all the parts are the same, this moron comes from the back of the store and says it won't work, that I'll need the block 'deck-cut' 125 thousanths. OK, that's an eight of an inch, visible with the naked eye! I tell him he's full of it, we just went through the part numbers in the book. He continues to tell me I don't know what I'm talking about, being just a kid. I got p***ed and went home, drug out the block, the spun crank, and a piston and rod, and some bearings thay were lying around, and mocked it up. Just as I expected, when I turned the crank over, it came up flush with the top of the block. I coulda paid good money to this stoner to ruin my block, but thankfully knew I was right and how to make sure. I ended up using the original block anyway, and still have the 4 bolt block that I hope to someday build up.

Most of my friends are "strokers" , most still are!
Currently 93 Ruby 40th Anniversary Roadster/6 SPD

sorry for your trouble marc. i have been an engine builder for 40yrs and i can't tell you how many times people have had work done by "friends" or accepted advice from "friends" and had problems like you have. good luck russ
[SIGPIC][/SIGPIC]

What you describe is very common and is most prevalent with people whose entire knowledge of engines consists of watching Speed Vision,reading Hotrod magazine and memorising the Jegs and Summit catalogues. The prerequisite of I-can-out-engineer-GM-in-a-heartbeat mentality goes without saying.

Unfortunately the advent of the internet has also meant that the K.I.A. types also surface virtually everywhere, and seem especially to be drawn to internet boards where they can share their talents.

The free advice is usually worth exactly what you pay for it. 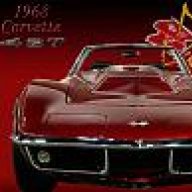 I feel your pain. I've even bought an engine block from a certain company and ended up with a POS. Unfortunately, I can't sue them because I can't get jurisdiction between the involved states. I posted a message in the forum warning people to stay away from this company, but it drew so much controversy from the forum members, that the mod's shut down the thread.

Personally, I think it's important the spread the word of fowl play and this forum is a good means of doing it. Keep in mind though that there is a difference in reporting someone just because the ticked you off and a 'business' that makes it a habit of ripping people off. I consider ourselves a brotherhood (or sisterhood where applies), and we have to protect each other and our investments!
You must log in or register to reply here.