More pictures you have not seen.

Here are a few more. TC and others have suggested I get my own web page. I have been so spoiled with the massive amount of space available on Photopoint and the ease of operation for a whole 29 bucks a year, that it is hard to consider paying that much a month to do basically the same thing. Still searching. In the mean time, check out a couple of never been seen before on the web photos.

I am sure you can agree that this interior was/is a total loss.

I understand some people may be having trouble opening these pics.

Here is FAT BOY, better known as Mod Man and or yours truly pressure washing the bare frame.

HOLY COW CHRIS, Those are some really powerful photos. You really didn't have any choice in a total restoration on that car did you.

I can't believe you repainted it black when you already had such a nice paint job before. And the engine compartment looked so well kept and polished. A little armor all should of taken care of the interior.

Did you find any mice in the car when you disassembled it ????

Whoahhh, dude,
You know Im not up to snuff for a "total restore" but if I was, I would have been worried sick that there was "nothing" to work with at all on that car. Im sure you have your reasons for diving in at that level of destruction..wow.
I have another psuedonym relating to you, Dr. FrankenChris:L
Cant wait till you get it living and breathing again

2 More you have never seen!

Okay, here it the custom rear body panel paint. This must have looked really cool in 1975. It was done by a artist in Atlantic Beach Jacksonville, Florida. I have yet to see if he is still in business.

Here is a better shot of my interior woes. Nothing that Visa and Mastercard could not handle. At least these parts are still available. I now have 99% of them replaced and in boxes all over the house.

Did you find any mice in the car when you disassembled it ????

None alive, but plenty of evidence they were there.


"Did you have to do any repairs to the frame?" Racer78


No, it was the only part of the car that was not rusted out. Can you believe that?


"I have another psuedonym relating to you, Dr. FrankenChris" TC


Well, we were actually counting up how many other cars have sacraficed parts to this car so that it can live again. It is looking like about a dozen other soldiers have parts and pieces in the new mix.
6

Re: 2 More you have never seen!

Here is a better shot of my interior woes.

You have got to be kidding, Im laughing out loud at that one...
I kind of like that steering wheel cover though, is it leather?..do you want to sell it??Jus kiddin!!

Re: check out FAT BOY

Here is FAT BOY, better known as Mod Man and or yours truly pressure washing the bare frame.

Chris, I'm just not up to that kind of picture so early in the morning:gap. Seriously, my hat's off to you for taking on a project like that 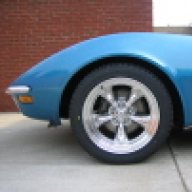 Chris,
I'd seen the pics of the chrome bumpers and the roll bar, which is awesome, by the way. I had wondered what the car looked like before...

I came across this post and actually laughed out loud. And I thought I bought a turd... WOW. You are the King.

I paid $4500 in 1997 for a shell, missing almost everything. Some joker put a automatic in it and just cut it up. 3 bolts held the tranny to the block, a 68 pickup truck engine. Wiring shot. Good frame. 4-5 coats of paint and 1/2" thick bondo. You get the picture. I didn't have the $ to go all out like you are, but I spent 4 years to build a nice, stock-appearing driver. If I could only get those aftermarket door panels to fit right... but I digress. I KNOW what kind of work this is; you've got guts.

Can I ask, what did you pay for that thing,as it sat? Did it run? What are your plans?

Watching your project, to me, is SO much more interesting than the stock restoration. Build it your way and drive it. Keep up the great work.

Let me guess. A crockagator was living in it and didn't want to loose his home so he held on to the nose while you were winching it out of the Everglades backwards.

After viewing these pictures I went out to the garage and kissed my '59. You are an artist.
and a saint.

Hey, thanks for the compliments. The truth is, I don't know if this demonstrates tallent and dedication, or stupidity and too much extra time on my hands. No really, I don't have anymore extra time than anybody else, I just don't get much sleep and keep a constant ring of grease around my fingernails.

Quick story on the ride. I bought it from a co-worker. Her dad bought the car in the 80's and the whole family enjoyed it for many years. It broke down in the late 80's with a bad alternator. About that same time Egbert (the prior owner) got sick and did not have much time or engery to fool with it. He bought a big block coupe with no title and took both of them to a local shop. The plan was to put the big block in and repaint the convertible.

Well, he died, and the shop got closed down by the IRS. Since Amy (his daughter/my co-worker) did not have a title to the big block car she was not able to claim it. She did however drag the convertible back home. It was dropped on her uncles property. He got mad that it was there and decided to move it for her with his truck, thus the crushed front clip. Anyway it sat for around 10 years out in the weather. She wanted to keep it because when her father died, he had died alone in the house and was not discovered for weeks. Needless to say the house had to be gutted. The only physical memory left of her dad was this car. So, she was torn between selling, trying to fix it up, etc.

A mutual co-worker put me in touch with Amy to hear the story on the car and see if I could help her. She told me it was a 427 four speed, convertible, etc. I almost wet my pants and offered to go give it a look and see what it would need to fix it up. Well, as soon as I saw the hood I pretty much knew it would be a small block. It took a while to convince her that it was not a small block, and I even showed her pictures of a big vs. small block so she would know I was not trying to fool her.

To make this long story short, I told her that she could buy a new Corvette for what she would end up paying a shop to get it running, painted, etc. At that time I offered $1,500 plus my old riding lawn mower. She thought it over for a few weeks and finally accepted. I did remove the hood, clean it up, and build a cool set of brackets on the back to allow it to hang on a wall. I took a permanent ink marker and signed a very special thank you note to her and her dad thanking them for the opportunity to rebuild this car. I presented the hood to her as a total surprise. It made her cry (happy tears), and now she has the hood hanging on the garage wall. She can still keep a piece of the car without having to deal with the problems of owning the car.

One of the cool parts about this story is the fact that while waiting on the tow truck to arrive and pick up the car I stumbled over something in the tall uncut grass next to the car. It was the ORIGINAL NUMBERS MATCHING BLOCK! I kid you not. Anyway, loaded that up as well and have it under my work bench in the shop. (300 hsp 350)

I traded the motor that was in the car (early four bolt truck block with a SCHWEEET set of bowtie heads) to the race shop for building my roll cage/saftey bars.


Tom, yes, I still have the valve covers. They are in nasty condition, but some day I will polish them up when I get "spare time".

Sorry for the book. I just have not really figured out how to condense this story yet.

That's a great story Chris. Too bad she didn't have a bill of sale on that BB car.

You are the brave one aren't you!


"plus my old riding lawn mower."

Not only are you extremely talented mechanic with a ton of patience, you are also a thoughtful person to give her back the hood as a memory.
Gary