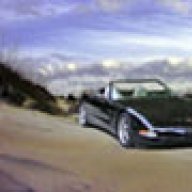 Does any one know what the dB levels are in the Convertible, at idle and 70 mph? I looked all over and can’t find any test results. My wife is looking a buying BMW Mini and wants to compare the noise specs and the Mini to the Vette.

Tom:
As a vehicle acoustics engineer, and one who has worked on the C4 and C5's, I can tell you that the answer is not that simple.

Without the test results in front of me, I can't give you a direct answer, but I can say this: First, unless the noise testing is done under exactly the same conditions of wind, road surface, and ambient temperature, the results will not be exactly comparable. That is, the test to test variability can exceed the car to car difference.
Second, dB levels don't give you an accurate representation of the differences between one car and another - unless you're comparing one Rolls Royce to another, or one Lincoln Continental to another. Between two such radically different cars as a 4-cyl. Mini tin box, and a big booming plastic sporty coupe, the character of the sound will be radically different. A sound quality metric such as Articulation Index would give a better indication of the perceived differences in interior noise than will simply measuring the sound level in dB(A).
Third, the sound level measured in dB(A) - 'A' indicating a weighting factor used to mimic human hearing response - does NOT give an accurate representation of perceived loudness. For example, while a one dB difference is the smallest amount of difference that the human ear can reliably detect, a 3 dB difference is equivalent to doubling or halving the sound pressure, and yet humans perceive a 10 db difference as being "twice as loud" (or half as loud).

Are you confused yet? If not, I can continue...

For the sound levels, look in a recent Carp & Drivel; they can at least push the right buttons on a sound level meter. But be aware that this is only going to be a small part of the story. And you might not like the answer you get. Horsepower = Noise, and the Mini might be significantly quieter than the 'Vette - measured in dB(A), anyway.

Thanks for the long answer and the explanation. I did follow it all. As it turns out we did drive a Mini this afternoon and you are right horsepower = noise. It was a great ride and it handled very well. No doubt that Road & Track was correct in saying that it was fast in the 700 Ft slalom.

Tom:
You're welcome.
But the key question is: "How did it sound?"
"Powerful"? "Expensive"? "Solid"? "Tinny"? (Probably not!)
This is the kind of question you'd ask of a jury evaluating sound quality.
And how does it compare to a Corvette?

Robert:
It didn't sound like a Vette by any means. The base model has only 115 HP, the S has 165 and can do the 0-60 in 6.9 seconds, not bad for a little car. It was very comfortable, and like I said the handling was really good. I was solid in the curves just like my Vette. My wife is now trying to pick a color. They are selling so fast that the dealer we saw yesterday is adding $3000 to the cars he has in stock. If you order one its 60 days until delivery.

They sound like fun; my wife wants one too, but we live in North Texas, where the "standard" family car is the Chevy Suburban, and an Expedition is considered to be a compact SUV!

I'm not sure a Mini even shows up on a Suburban's radar screen.

Chevy Suburban to a Mini is like a tub boat to an oceanliner.
Tom
Tom
You must log in or register to reply here.