Over the final hurdle! 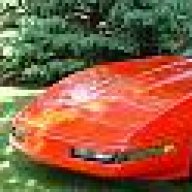 Most of you can relate to the fact that we can want and dream all day long but until momma gives the green light the garage will not become home to anything other than the family cruiser.

This morning, we won't discuss how, I got the green light. Yippee!!!

The blank check from Capital 1 is on it's way. I bough my last vehicle with their blank check program and it's a great way to purchase a used vehicle. ( No advertising intended here.)

I also want to thank all of you again that responded to my introduction post. I appreciate the information and pics.

Ok, now I need to call the insurance company. hnoes

Congratulations. Of course we will be expecting pictures as soon as you get it home.

Just thought I'd post some details in case anyone else out there is curious about any of this information:

Originally I was looking at 60 month financing, but bumped that up to 72 months. The rate ended up being 10.75 which surprised me, but Capital One was the best deal last time I used them so I'm not going through the aggravation of spending a lot of time to save a fraction of a percent. It makes a difference if you buy from a individual rather than a dealership, etc.

This coming Sunday I'll be looking at a 1994 6-speed. This time next week I just might be

, we'll see.
You must log in or register to reply here.