What are the differences between a 63 series drum brake rear wheel setup & Diff and a later model
(67) rear end. Can a later model rear fit into a 63 frame without extensive mods? and is the trailing arm assy the same? 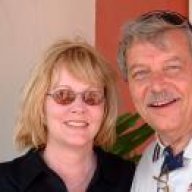 63 to 67 trailing arms are all the same. So is the differential. Half shafts too. Only difference is the disc/drum related parts. Hope this helps. PS 63 differentials used a different posi unit inside. 64 and up used an Eaton unit (as I remember) Externally it's identical. Chuck
1963 Corvette Conv., Red/Black, 327-360HP FI, 4 SPD, NCRS Top Flight
1969 Corvette Conv., Orange/Black, 427-400HP, Automatic, NCRS Top Flight

The differential yokes and half shafts on 65- 67 big block 396 and 427 differentials are different than small blocks. There are no u-joints per say on the big block units. The half shaft units bolt to the yokes and are larger and stronger. The tubes are also stronger.
enjoying the hobby since 1969

Frame outer side rails are different starting in '65 to provide clearance for the rear disc brake calipers.
John
'67 Convertible

JohnZ said:
Frame outer side rails are different starting in '65 to provide clearance for the rear disc brake calipers.
Click to expand...

That make good sence but it is something I have never thought about. Thanks John.

JohnZ, are you certain of that? I've never heard that.

Vigman, I'm not sure what the basis of your question is... are you adding 67 parts to a 63, or are you planning to replace a rusted frame in a 67 with a solid 63 frame?

There is a difference in the trailing arms: a bracket was added to the disk brake version. If you have a pair of the later model trailing arms with brake/axle assemblies attached, I suspect everything else will fit the 63 frame just fine. Of course, you still have to provide the proper master cylinder and proper brake lines.

If you have the original frame, you can compare the frame rails in that rear kickup area.

If you're considering putting a 63 frame into a 67 car, later cars had rubber cushion body mounts in the passenger area and the body mount brackets on the frame were placed a little lower to compensate for the cushions. The 63 frame also lacks a balancer depression in the front crossmember to accomodate a big block engine. Later frames also had a small cross-brace diagonally across the joint between the frame rails and the crossmember at the rear wheel kickups.

The way things are going...

Looks like I'll have to get a frame here....body there. I'm just looking for more info in my Quest for C-2

Couple more minor differences: 67 (only) frame had a shifter mount bracket on the trans-mount crossmember (can be added to earlier frames, or an earlier trans-mount bracket used), and there is a difference in the emergency brake mounting setup (67 has a lever-handle between the seats with frame provision for it whereas earlier cars have the older pull-out T-handle beneath the dash).
J

Don't know offhand how big a deal it is, but a "dent" was added to the outer frame side rail for caliper clearance - just outboard of the jounce bumper, that wasn't there on '63-'64 frames. May not be an actual interference problem, but might have just been changed to add a margin of safety under "extreme" conditions. You can see it in the photo on page 261 in Noland's book.
John
'67 Convertible
O

Mike
Their are a couple of other differences between drum brake and disk brake frames/trailing arms that have not been mentioned here.

I doubt that interchanging the trailing arms would make much of a difference since it's not likely that it would bottom out,....but it could unless you make sure the rubber bumpers match the trailing arms.

One downside to the drum brake frames is that you can't put as big a tires on them because the rubber bumper mount will ruin a tire.

Ol Blue
PS The big-block cars DO have U-Joints, but they have heavy caps on the inboard u-joints instead of lightweight straps.
You must log in or register to reply here.