DAYTONA BEACH, Fla. (Jan. 23, 2022) – Corvette Racing finished up its first three days of official testing and competition in the new GTD (GT Daytona) PRO class of the IMSA WeatherTech SportsCar Championship on Sunday with work to do ahead of the upcoming Rolex 24 At Daytona.


The team finished eighth and ninth in class and 14th and 18th among GTD cars following a 100-minute qualifying race to set the grid for the Rolex 24 on Jan. 29-30. Sunday’s race was the first for the evolved Mobil 1/SiriusXM Chevrolet Corvette C8.R, which ran for all three days in GTD spec for the first time in a full-field setting. The results show the uphill battle facing last year’s GT Le Mans (GTLM) race-winning program. Antonio Garcia and Jordan Taylor – last year’s GTLM champions and Rolex 24 winners with Nicky Catsburg – in the mid-engine No. 3 Corvette C8.R led the team’s efforts but finished a lap behind the class-winning Lamborghini.


The C8.R has undergone a number of changes from its two-year GTLM campaign to bring it in line with the existing GTD cars. Corvette Racing is running with more weight, less power, a higher level of drag, customer Michelin tires and an ABS system for 2022 compared to 2021. Even with a mid-week Balance of Performance adjustment by the sanctioning body in an attempt for more evenly balanced competition, the Corvettes still faced a significant performance deficit in Saturday’s qualifying and Sunday’s race.


Sunday’s race ran green for the full 100 minutes. Garcia ran the first half of the race and gained three spots in class in the opening 10 minutes. He remained there before the GTD pit stop cycle began and handed off to Taylor, who rejoined in the same position after Sorensen made the class’ final stop with 45 minutes remaining.


Tommy Milner and Marco Sorensen teamed in the No. 4 Mobil 1/SiriusXM Corvette in their first race together. Sorensen turned his first laps in competition as a member of Corvette Racing as the pair will drive with Nick Tandy. Milner opened with the longest stint of any GTD PRO drivers at 55 minutes but the top-speed deficit hurt his progress before the pit cycle began.


Corvette Racing returns to the Daytona track Thursday for the opening practices for the 60tth Rolex 24 At Daytona. The race begins at 1:40 p.m. ET on Saturday, Jan. 29. Television coverage begins at 1:30 p.m. ET on NBC before transitioning between the USA Network and the Peacock streaming service before the final two hours of NBC coverage Sunday afternoon. The full race will stream on Peacock while live IMSA Radio coverage will air on XM 202, SiriusXM Online 992 and IMSA.com, which also will host live timing and scoring.


ANTONIO GARCIA, NO. 3 MOBIL 1/SiriusXM CHEVROLET CORVETTE C8.R – EIGHTH IN GTD PRO: “Knowing how little testing we did before the Roar, we used this race as a big test for tires. There are a lot of different things with the tire regulations where you have to run a certain pressure, and we learned a lot about that. It’s the first experience we’ve had with this. I was driving and learning how to maximize the tire performance. Even if we didn’t have the overall pace to be farther up, I think we can a lot from here for the race. Even if it’s only learning how to run a double-stint, it’s better than nothing. Almost all the other GTD teams have been running this tire on their car for a long time so there is a lot of catching up we need to do on this little thing. Let’s see if we can come back stronger in a few days so we can be where we need to be.”


JORDAN TAYLOR, NO. 3 MOBIL 1/SiriusXM CHEVROLET CORVETTE C8.R – EIGHTH IN GTD PRO: “The race was a qualifying race so you can’t really win too much in that event. It’s pretty much just about setting us up for the Rolex. For us, we know the car we have now. Throughout the Roar, we made some developments and gathered more data to hopefully set us up well for next week. That’s the one that counts. We still have some more work to do in order to understand the ABS, the new tire and everything. The guys will have a busy week ahead but I know we’ll come back strong next week. Understanding the racecraft of this category was important. We’re now mixed into a new class with GTD and Am drivers as well. Understanding how they race and how we will interact is useful. It’s a lot harder to get by them now that we have the same BoP, so it will make for a long and interesting 24 hours. It will make staying out of trouble that much more important than years past.”


TOMMY MILNER, NO. 4 MOBIL 1/SiriusXM CHEVROLET CORVETTE C8.R – NINTH IN GTD PRO: “We’re obviously not thrilled with our ultimate pace. There is still a lot learn with tires and things like that – experience that will help us for the race. Today was good for us as drivers to learn more about the tires and about interacting with the other competitors in GTD. This played out as we probably expected. The plan, of course, was to learn as much as we could. From my perspective, learning where some of the other cars are fast and where they aren’t, how they race… that will be a huge part of 24 hours here with 35 cars all near our pace. From that standpoint, it was successful. The car is in one piece and we stayed out of trouble. There’s lots of race data for the engineers to pour over and make our Corvettes as fast as they can.”


MARCO SORENSEN, NO. 4 MOBIL 1/SiriusXM CHEVROLET CORVETTE C8.R – NINTH IN GTD PRO: “First off, it’s amazing to drive a whole stint in the Corvette. I got to understand the car in a totally different way. The tires we are on now are new for the team, so it was good to get some data on how much as a driver you can push on these tires. I’m still on a very steep learning curve with this car and I want to keep that curve going up so we are 100 percent ready for next week. I was a little surprised it was green all the way. You drive to the limit of the car and then you just sit on the straights and wait! There were some silly overtakes out there that people probably didn’t have to make in a qualifying race. I’m happy to have done my first race in a Corvette now. We have to now keep it going for the next week.” 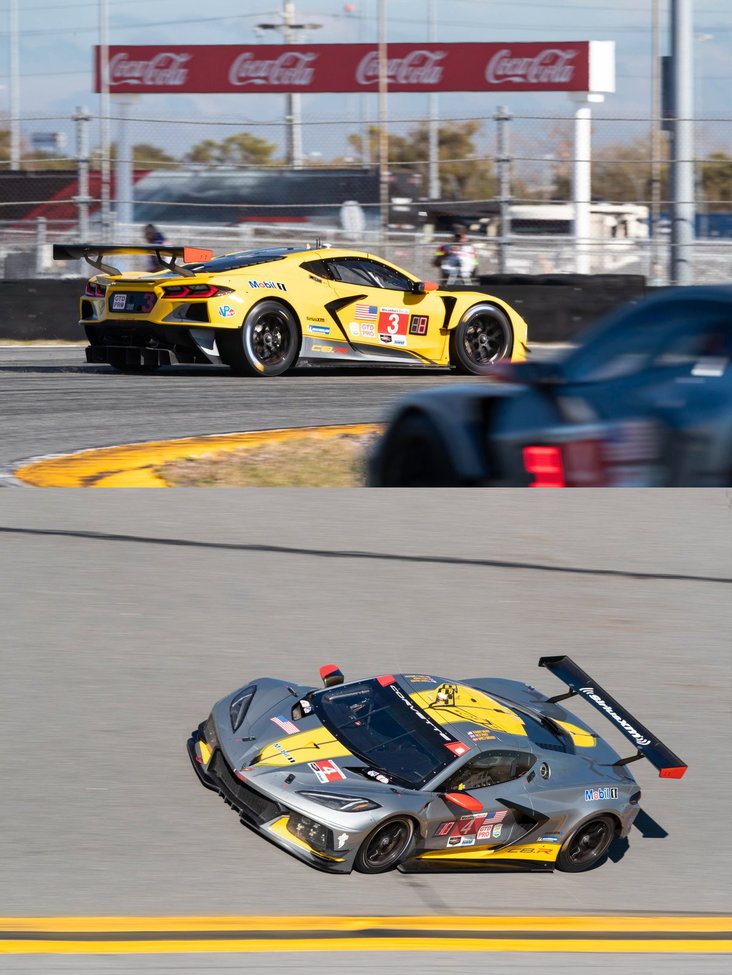