I have a 96 LT4. Is there anything that might cause the Service Engine Soon light to come on flashing and then stay on for a while WITHOUT setting a code? :confused 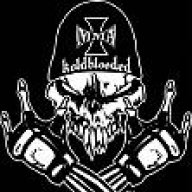 Don't think so as it's very intermittant. Has not done it for about a month until today, and if it follows the usual pattern, it will be off tomorrow.

Do you have a code reader?

If not, as soon as it throws the code/s, I'd stop at the nearest Autozone and see what they pull up. If it's throwing a code, it has to store it in memory.

In the past, I've taken it to a Vette Shop several hours after the flashing light has gone steady. I've done this 2-3 times and by the time I get there, there's no code. I'll try the Autozone idea as I drive right by one on the way to work. This has always happened first thing in the morning within a mile or two of home.

Cool... even if the light is no longer on, still pull in & have them scan it. It should show what code caused the light to come on. FWIW...my LT4 has never had the SES light come on w/o storing a code. In fact, I've had the light come on & go off and while I was still driving I reached in the center console and grabbed my code reader and plugged it in and pulled up the code right then.

Anyway, good luck w/ that and post what you find.

BTW, you can get a cheap code reader off ebay for $20

Good idea on the code reader. By the way, the light went off on the way home. Oh well.

jcs44 said:
Good idea on the code reader. By the way, the light went off on the way home. Oh well.
Click to expand...

If the light is coming on, something is definitely triggering it...have it checked out.

I'm going for it on ebay. Thanks. Are all of these about the same?

jcs44 said:
I'm going for it on ebay. Thanks. Are all of these about the same?


Of course if you spend more you'll get more features...such as reading the 02 sensors, fuel info etc...BUT to just read codes/erase & kill the light, the $15 one is all you need. In fact, that is basically the one I have.

I am going to throw out a couple of articles that may offer a different outlook as to what is happening to your car.

​
A quick look at “spark-knock” fundamentals.

For the record we will say that the knock is a non-regulated quick rise in pressure generally confined to a pocket in the combustion chamber.

Now let us see if we can find out how this “quick rise in pressure” occurs. There are a number of ways but we will only mention two. One is a hot carbon spark setting off the mixture generally in the squish area of the head before the piston reaches top dead center of compression. That is rare these days.

The second would be low octane gas that ignites spontaneously at a low compression pressure. Even in today’s world of good grades of gas there are some combustion cavity shapes that are better than others so if one got a poor tank of gas knocking could come into play.

Even if the knock is not audible the sensor will indicate knock has occurred.

Now a loose wire will also be sensed as higher resistance to the battery voltage to the sensor. Its only way of telling you that something is wrong is to tell you knock has occurred. If there was a loose wire program it would indicate “loose wire” but since there is no such program it can’t tell you exactly what is wrong.

With this in mind a code H43 which is a knock sensor code may not necessarily mean the sensor is bad but rather a wire is loose or broken.

There have been a lot of threads about getting a code 43 (Knock Sensor) posted in the last few months.

Most of these codes do not result in the car going into limp home mode and resolve themselves.

I have had the same thing happen and have been watching the other post with interest. I am wondering if there is a commonality for this problem. I have a 93 LT1 with 73K on it and it obviously has the original plugs and wires.

What I have begun to observe is that my car does this most frequently when it is raining or very humid.

It seems to me that the other posts are for cars around the same age and mileage as mine. What I’m wondering is if they are noticing that this code shows more often in damp weather.

My thoughts are if there is a trend tied to moisture then I would begin to suspect that the high energy ignition is going to ground through the old spark plug wires thus causing a momentary weak fire in a cylinder. As the engine runs for a while it creates heat through the wires which dries them out and the short is gone. I think it would be of interest to see if the other members having this problem could qualify wither they get the signal in dry weather or humid.

John I'm not quite sure I follow your knock sensor code theory but will relate my experience for what it is worth. My 93 has about the same miles on it as yours and was turning on the SES light fairly often, the code set was for the knock sensor.
On mine it seemed to happen shortly after start up and I never intentionally drive the car when it is raining so know that was not a factor. The light would then go back out and remain that way until after another cold start.
I should also mention the light always came when driving normally, not pushing it and certainly not at high piston speed.
I checked the sensor circuit and the supply voltage was correct (seem to recall 5 volts?) The resistance of both sensors was within specs but they did have different values, don't recall the readings.
My first thought was a bad connection at one of the sensors but I couldn't get it to set a code by wiggling the wires. I replaced both connectors on the theory that new connectors were a cheaper guess than the sensors, that guess was wrong, still did the same thing. Such things annoy me so I eventually ordered two sensors and used the replacement as an excuse to change the antifreeze. Replacing them cured my problem, I have no idea which one was the culprit but at least it is fixed.
J

I got the code reader from ebay. As luck would have it, the light was on this morning. It reads 0300 which is random/multiple cylinder misfire detected. OK, now what to look for?

jcs44 said:
I got the code reader from ebay. As luck would have it, the light was on this morning. It reads 0300 which is random/multiple cylinder misfire detected. OK, now what to look for?

Mis-firing Plugs,Bad Plug or Coil wires,Breaking down Coil or Opti-Spark getting ready to take a Dump!!!

hi there guys,
would it be possible to modify and put a obd1 plug on the end of this code reader/scanner obd2 do you think??
for ealier model obd1 cars!
it would be interesting to find this out?
cheers
glen
Australia
You must log in or register to reply here.