toobroketoretire said:
The use of RTV is to prevent rust from forming in the outside end of the bores; not the fluid side.
Click to expand...

And where do you think the piston and seal travels to as the pad wears? :eyerole 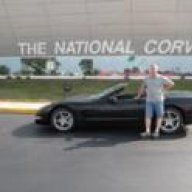 toobroketoretire said:
The moisture enters the system at the master cylinder and always has. The moment you unsnap the lid moisture instantly gets absorbed by the DOT 3 and once absorbed it'll travel to the lowest spot; the calipers. That's why it's recommended brake fluid containers should never be left OPEN. Also all of the master cylinders now days have clear reservoirs so you can see the fluid level without having to remove the cap. The higher the humidity is the faster water gets absorbed by the DOT 3 and that's why the DOT 5 is more desirable for cars that don't have anti-lock brakes. But DOT 5 must be used with the later J-1401 hoses because it'll severely swell the earlier hoses. When I switched over in my '71 my rear brakes quit working within 3 months because the hoses had swelled shut. The use of RTV is to prevent rust from forming in the outside end of the bores; not the fluid side.
Click to expand...

Talk about short term memory loss!!!
He starts with "moisture enters at the master" then says "RTV seals out rust"
What does he thinks causes rust?

Last time I took a breath there was H2O in jt

Sent from my SM-T530NU using Tapatalk
[SIGPIC][/SIGPIC]
2002 W/Borla Exhaust
​
You must log in or register to reply here.

Do NOT use the new DOT 5 Brake fluid!