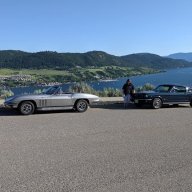 HI everyone I am new here. I have a shop manual for a 1963 3spd transmission but I own a 1965 4spd transmission.
Last year at teh end of the season my water pump blew, I was going into a impromptu car show and I was waiting for a chick to park her 1957 Plymoth and there were was a 1957 roadman station wagon in my way when I heard a clunk. I though my tranny dropped. You know what it is like when you are drivign a Vette everyone looks. It is worse when a woman is driving it because everyone wants to know if she can actuially park the thing, and they all disrespecvt her, and just want her car. (sorry I am a little jaded, I have been doing this for a while. Anyway I get the think parked and I am swearing my head off, but all the guys are coming towards my car because everyone heard the clunk. I had shut the engine off but I thought I am going to see if it will start. it stated and so I had it in Neutral so I gunned it. Well that was when the water pump blew, the force was so stong all of the blots came out the the radiator fan. I had not been driving the car because I found a bolt under it and I didn't know where it came from. I belong to a couple of car clubs and I wanted to get my car up on someone;s lift so I could see want the heck was happening. I knew my side pipes were loose, I wanted some to come over and help but of coarse everyone wants you to bring the car to them. I hate having to ask for help, it really sucked because in covid not one person called me, at one of the last car meetings I went to I told a couple of the guys I had been raped in my own house because of that GD car.
Anyway long story short a guy guy helped put the car back together, he found all the bolts under the car. The point was I had asked them all to not touch my car I have BCAA which is AAA, there were about 20 guys standing around my car, I said do not touch it, lets wait until it cools down.
Our whole town had been on Forrest fire Alert the week before, I moved both my cars to at town over called Kelowna, I was able to store my cars in a young woman's detailing shop. When you have to choose what to take out of the house when fires are coming towards you, I choose to get my cars out first. That day I was just happy to be alive and have my cars out, I was driving like a maniac, how can you not?
I am grateful those blot didn't come out on the highway the week before when I was going 120 MPH.

I got the water pump fixed last year, and then I took a drive out to a small town called Falkland be, I had taken and old couple it to my home because they were order out of their home because of the fire, this old hug had a couple of collector cars and 5 old Harley Davidson, he had two vehicles packed up with pictures and important paper, and the ashes of of his 21 year old son in the back of the car. He was happy to help move my car, he drove my mustang and it was a much needed distraction.
On the way pout there it blew my speedo. I got it up on a lift this year and the speedo is moving in and out of the transmission when I drive. The young fellow that helped me last year works at a budge brake and muffler, he allowed me in his shop and showed me how it was coming out.

Does anyone have a link to a shop manual online so I can order the parts I need so that I don't end up with a speeding ticket, my last ride of the season in my mustang cost me $197, I got 20$ off for paying the ticket early.

I wish I would have taken a picture of it when I had it up on the lift, I thought I had all the books I needed at home.

Sorry for the long drawn out story, I hope it made you laugh a little because I usually have Corvette Therapy, but some days it can be corvette torment. So I know you boys say, help a brother out, can someone please help a sister out? Has anyone experienced this. I will try to get some pictures. My vette needs some TLC and I don;t want to have to break the bank I want to learn how to do it myself.
I also starting a car club called the Ali-Katz

Sorry of I have bad grammar or mistakes hear I had a brain bleed in 2006 while nursing my husband, they drilled 3 holes in my head. I am not always great at proof reading.
Thanks for the Help.....
Ali
Ali
Just a girl that loves her cars. Corvette Therapy is a real thing, everyone should get a change to try it. Vroom Vroom, gotta love the sound of those side pipes, they make my heart glad.
S

Have you checked the speedo gear in the transmission and the bullet?
You must log in or register to reply here.

D
Back in the saddle again....