Hi all - I'm ready to do my first tune up on my '65. Easier said than done! I'm still learning this car as I've only had it for a two months. It has a 327 in it, although to be honest, I have no way of knowing for sure. I know its not the original engine so I can't check the VIN/block etc. I don't see a id on the block as it might have been decked? (Passenger side in front of block by water pump). That area is smooth....

I asked the auto store for a replacement for an R45S which is currently in the car. Although I think they still looked up the year/make of the car. I asked for a Bosch platinum plug and was given #4236.

So, I was about to put em in and decided to compare them. The platinum plug is 5/8" from the top threads to the end. The R45S is only 1/2". I don't know how close plug/piston come so I decided to hold off until I can confirm piston won't meet plug!

I also couldn't find a cross reference from delco to Bosch to verify.

Should I put them in? Also the car was modified from points to Electronic so I'm not sure if I should gap at spec .035 or .045.

Thanks for any help.
W

I don't consider myself knowledgeable on spark plug equivalents, but I think your car originally called for an AC 44 plug (not R44), and many owners use the slightly hotter 45 plug (not R45) to avoid fouling when the car is primarily used for boulevard cruising. I've also seen posts by owners that use the R45S plug currently in your car, and I've heard it can safely be used in any vintage small block.

GM part 5569992 can also be used as a replacement, and it's available through discount sources, such as gmpartsdirect.com, at a very reasonable price.

Since you don't know what engine is in the car, your question can't be accurately answered, but most of the plugs mentioned above should work. I agree with you that it's risky to use a plug with an eighth inch longer tip.

You can generally find any of the AC plugs on eBay. The R44 and R45 go at a higher price than replacements (I think about $30 to $40 a set, plus shipping); the R45S is less expensive... here's an example: http://tinyurl.com/mevgk

If the distributor was replaced with an actual HEI distributor, then the gap should be widened; if the old distributor has simply been modified with a kit to replace the points with an electronic triggering device, and it uses an original coil, then I believe the original gap should be maintained.

That was a sharp eye to notice the difference between the plug. I am not sure if the added length would hurt or not.I hope some one here will know

Thanks guys. I think I will lean towards safe and replace it with the same exact plug to avoid any potential problems until I can get it sorted out. The current plugs are fairly well carbonized so I have some tuning to do.

I do a lot of wood working and 1/8" is a mile in that hobby, so it stuck out to me like a sore thumb.

I can buy AC R45S plugs any day of the week at my local auto parts store for $1.50 each, and they work just fine in all my small-blocks; no need to spend big bucks for "whizbang" special plugs.
John
'67 Convertible
T

I did indeed put in the R45S and its running fine AFTER I took a hit from the ignition. Daylight, no way I could see the spark, but I heard the tic tic tic. Figured I'd jiggle the cables to see which one and zap!

I bought a set but I don't like em - a bit to long. So, I have to order em. Until then at least the car is running much better. One plug that I removed was fairly fcarbonized so I'm hopeful after cap, plugs and wire it will burn clean. 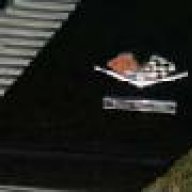 As others have stated, a good choice is the R45S for most early SB Vettes. However in some situations the "S" sufix with it`s extended tip will hit the dome of higher compression engines 11-1+. Those Vettes in that or even higher compression range will be better off using the AC R45 with out the "S" sufix. No chance of those hitting. In conjunction with spark plugs another point, the so called indexing on extended tip plugs to do what the R45 prevents, is a waste of time.