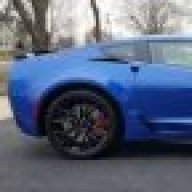 My '05's developed a rattle in the area of the rear latch for the targa top when I hit a bump. It sounds like it is right behind my right ear. Has any one dealt with this before? The car "has" had the roof panel recall performed already and is NOT the problem. I physically can't see a problem with the latch, but something is rattling there. I had my hand over the latch while hitting bumps and can hear a rattle, but I can't FEEL it, even while holding the latch handle and/or the lock tab. There aren't that many moving parts involved. Very Strange! The car only has 17,000 miles on it. WTF? GM wants over $200 for the latch. Probably another "Corvette Tax." Corvette Central has a repro for $139. What do you all think???

Well if your absolutely sure its the latch I'd buy from Corvette central .My reasoning is that it might be better.

I've read a lot of top problems on both C6 & C7's .
You must log in or register to reply here.