I know this is a C4 area but I just have say at "Englishtown" this past weekend I was really impressed by the 2007 ZO6's. They are super fast at 505 HP. The only mod they need are tires big enough to hold it down to the track. Unbelievable!

All the vettes were fun to watch! 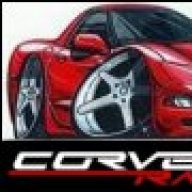 Yes its amazing what 505 h.p. does to get it going. But whats really impressive is the latest issue of Road & Track, they tested 6 cars that were supposed to be capable of doing 200 mph in a shootout over a 2 mile distance on a naval air base runway. The Lingenfelter corvette did 200 in 26 seconds and in 4800'. Not too shabby. The Bugatti Veyron did it in 24 sec. with about 4700' of runway used ( supposedly the fastest production car on the planet earth, and with a price tag to match ) But the clear winner was the Hennesey Dodge Viper, it would break the tires loose at over 100mph! and made it to 200 mph in less than 3/4 of a mile ( 3488') and 20 sec. Now thats what 1100 h.p. gives ya.
A couple of also rans for comparison, Mercedes SLR Mclaren, 199.5 mph in 47 sec at the end of the 2 mile mandatory shutdown point.
A RUF RT 12, 35 sec in 7300', and the slowest of the bunch ( at least on this day with this car ) a Lamborghini Mucie'lago 190 mph in 50 sec at the 2 mile mark.
Clearly none of these cars will ever be in my garage, but its nice to see the Lingenfelter was well represented.
J

Sunstroked said:
The Bugatti Veyron did it in 24 sec. with about 4700' of runway used ( supposedly the fastest production car on the planet earth, and with a price tag to match )
Click to expand...

BTW I understand there are still 150 of the 300 Veyrons unsold. Some guys are never satisfied.

I got a chance to drive an 06 Z06 and compared to my stock 88, there is no comparison. Although I'd love to have one I don't know what I would do with it. I can get in plenty of trouble with my old C4 and all that horsepower in the Z06 would be too tempting. The first to second shift at 40mph and half throttle saw me at 90mph in about a second. Enough to flatten the old eyeballs!!