Just curious if those of you who have a clue on different variations of the 700r4, do you think this will work in my 85 corvette without too much fabrication? Thanks
700R4 Transmission - auto parts - by owner - vehicle automotive sale

Wrong tail shaft housing. You may be able to use your housing, You would need to measure it and see!
It's got so it seems to me that the Internet has created a lot more Horses A$$'s than we have Horses!

As far as you can tell that’s all ill need to do to get it to work? So is this a good buy then?

Corvette trans tail on left for beam mount. Right is the mount on CL,so i would say no. 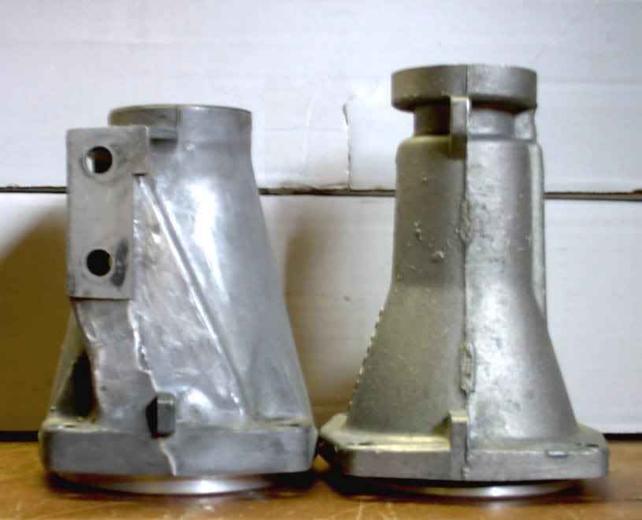 So I can’t just swap tailshafts? What do you think would I have to do in addition to that then? Thanks

You'll need to count the splins on the output shafts and length to make sure they are the same.

P.S.You'll also want to use your Speedo Gears and Neutral Safety switch. ​
It's got so it seems to me that the Internet has created a lot more Horses A$$'s than we have Horses!

If they were different all I would have to do would be get a different driveshaft right?

L98350 said:
If they were different all I would have to do would be get a different driveshaft right?
Click to expand...

You'll at least need the correct yolk, for the end of the D/Shaft.You could run into all sorts of things that could present a problem. What the problem with your transmission? In the photos on the link I see some other things that would shy me away from the one listed. Why not rebuild yours and know what you got,on Craigslist you can get a good Phuck'in if your not careful!~~!:W:eyerole

Im with GM Junkie on the CL buy. I did look at a couple threads on other forums.
700r4 swap with non-vette 700r4 - CorvetteForum - Chevrolet Corvette Forum Discussion
You could look up the # for Monster Transmission or E-mail them also.
Currently 93 Ruby 40th Anniversary Roadster/6 SPD

Well to be honest I couldn’t tell you what’s wrong with it. A few weeks ago i filled it to be able to move it and a bunch of fluid was coming out of the splash shield. Now as it sits I haven’t noticed it leaking at all, and it still has fluid, even when being moved and run for quite a while. I did a radiator replacement and I’m waiting for my new hoses to come in. So to clarify at the moment I don’t think it’s leaking, but no clue. If I replace the hoses and the transmission doesn’t
leak, I’ll run it until it blows. But I’ve run it out of fluid before but last time I drove it after putting more fluid in it shifted through all the gears. So I don’t think it’s blown, but I’m not sure how long until it gives out. My problem is I have friends with lifts but as of now they will only let me use their lifts if we’re just swapping a transmission and they don’t want the car sitting there while I attempt to rebuild the transmission.

Keep us up dated & I would at least invest in a fire extinguisher.
Currently 93 Ruby 40th Anniversary Roadster/6 SPD

The output shaft is different length as well. You would need to pull the transmission entirely to make it work to swap. It just isn’t economically feasible. The used transmission also isn’t going to have all the corvette upgrades.