Wrecked my '96 and need some help. 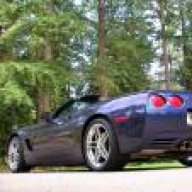 I wrecked my '96 LT4 this weekend and I need some advice. I had added it back on my policy last week, but for some reason the rep misunderstood me and didn't put collision coverage on the car, only liability and comp. I had added two other cars as well, and that was the coverage I wanted for the DD but not for the Corvette. I had just finished paying for this car in May after 6 years, and it was finally all mine until this happened.

It's... well, there's no other way to say this, it's really bad. I spun 180 on an onramp to a 60mph highway and slammed 90 degrees into the jersey barrier, top down (and saving my life, as luck would have it - more on this in a minute). I have no recollection of what happened, next thing I knew I was being lifted out of the car by a bunch of EMTs. But from my own analysis, both from studying the car and the crash site, I believe I was in 4th going for 3rd to accelerate onto the highway, but due to the right turn I missed and hit 1st instead - at about 50mph. Anyone who has been unlucky enough to have done this in a Corvette knows it will fishtail wildly and only a handful of drivers are capable of bringing it under control safely, if at all. It has happened to me once before on a 2-3 shift attempt in a left turn and I was able to recover, but this time apparently I wasn't. Had I had the top up, due to the 90-degree impact, my head would have smashed against either the window or the convertible articulation arms and I would not be here to be telling this story.

So now, I'm in a real mess. I'm physically okay, but the car is in really bad shape. I haven't gotten the estimate back yet, but I suspect it's going to take some time to do it and it's going to be either very high or unrepairable, and I can't afford to cover the costs myself.

Any advice would be appreciated.

WOW - Glad your OK, it's a bummer your insurance agent got it wrong...

I would bet money the insurance company is not going to cover you. unless you have some documentation or other form of proof that you specifically wanted "full coverage" on the vette, they are just assuming you put the cheap insurance on your car, got into a wreck, now want to blame it on them not getting it right.

Thanks for the advice and concern guys, it's covered so I'm fine.
B

dmd said:
Thanks for the advice and concern guys, it's covered so I'm fine.
Click to expand...

Focus on healing, let the ins company do the work.
9

Fast Freddie said:
I would bet money the insurance company is not going to cover you. unless you have some documentation or other form of proof that you specifically wanted "full coverage" on the vette, they are just assuming you put the cheap insurance on your car, got into a wreck, now want to blame it on them not getting it right.
Click to expand...

A lot of insurance companies now "tape" their calls for just this reason..I would check with them and see if this is so with your company.
Best of luck on your recovery.....

L
Question: 17YO need help deciding to upgrade to a later model C4 this summer, or keep current cars