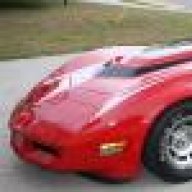 Hello all, its been a long time since i've been on the forums. Deployment, Training exercises, and life in general has been in the way. Before i get started i want to state my disclaimer: I have searched the entire forums for similar issues on my 700r4. I even entered a plain search "700r4" and went through all 10 pages of threads.

First off the technical data:

1982 C3
383 Blueprint with stroker and Hooker Super comp headers and side pipes
Differential upgraded by Mike Dwyer on July 2013 to 3.70
Flexplate upgraded to TCI with TCI bolts

Ok this is what's going on and what i have tried to figure out. I'm hearing a clacking, metal tapping noise on the right side center of the car. At first thought it was the valves tapping so i checked those and everything is adjusted correctly. (the reason i checked that first is because that is what the noise sounds like only louder) I head over to the auto craft shop on post and get some help. Fort Campbell has a tech there that has experience on older vetts. We suspect it was the flexplate and upon further investigation found two of the welds where broken. I did a quick tack weld and grind to just secure it until i could get it home.

It still made the noise on the way back to the house. Take note this only occurs when the vehicle is in gear and load is applied to the transmission. I can shift to neutral with thorttle applied and the noise is gone instantly. Shifting back to drive will make the noise gradually return and is back at previous tone within 5 seconds. If the vehicle is in drive and i release the throttle the noise dissipates quickly. More gas louder the noise.

At this point i drop the transmission and replace the flexplate. While 700R4 was off the car i inspected the exterior, cleaned, painted, and checked for obvious cracks leaks or damage which none was evident. The 700r4 was reinstalled with the new flexplate and high strength bolts. All bolts where tightened to the correct torque as per the AIM.

Torque converter was topped off and all fluids replaced. A new TV Cable was installed and set IAW published guidelines. Upon test drive the noise in question was still there with no change what so ever to the previously mentioned symptoms.

I was told by someone that it could be a pin on the piston which is a very bad thing, but that doesn't make any sense to me. I would hear that at higher RPM with the 700r4 in neutral. If anyone has any insight to this issue please let me know. I don't want to spend money on more stuff i don't need. If i need a new 700r4 then so be it, i have several corvette specific vendors in mind. All of which have been mentioned on here by members and i have researched them and prices.

PS I did do a torque converter test that was explained to me by the nice folks at fourth gear. Everything checks out on the TQ.

Thanks in advance for any advice. I know i can count on this great community to help. I just want her running in time for Cruising the Coast.

I did a google search and came up with a bunch of different forums. Most of the first searches did not match your exact problems but maybe worth some of your time.

My path would be taking it to a transmission shop with specializes with 700R4s and has a good reputation and see what they have to say. Your logic seems right on the money.

My 2 cents. Good luck and let us know what your problem was.

It could be a number of things...most likely in the drive train.
I think I would start with the flex plate as well...Good Luck,Let us know whay
happens...
Bill and Gail...save the wave

I also thought it may be the drive shaft. I have inspected that and everything checks out. While the differential was out I had all drive shafts sand blasted and power coated. When Mike sent the differential back, I installed everything according to his specifications and used the Spicer U-joints he supplied with the rebuild. I even replaced all the knuckle straps and bolts as well.
1982 C3 31k ORG Miles
383 w/Stroker Cam
Hooker Comp headers and Exhaust
You must log in or register to reply here.