“One of the design goals for the Corvette Stingray was to provide customers with the flexibility to tailor the car to their personality,” said Kirk Bennion, Corvette exterior design manager. “The Atlantic and Pacific Design Packages were originally designed to showcase how the Stingray could be configured as a luxury sport GT car or as a high-performance motorsport car.”

The Corvette Stingray Atlantic convertible and Corvette Stingray Pacific coupe concepts were introduced last fall at the SEMA Show. A strong response from enthusiasts helped influence production. They are the latest Chevrolet concepts from SEMA that made concept to reality. Several Camaros, such as the Hot Wheels edition, and the Sonic Dusk are now in production.

“We plan to make news with the Corvette Stingray every year, in part by offering special-edition models that offer a unique, personal ownership experience,” said Todd Christensen, Corvette marketing manager. “Our customers have told us they appreciate these limited-edition models, which have become an important part of the Corvette’s legacy.”

The 2015 Corvette Stingray Atlantic Design Package is inspired by the luxury and performance of private jets seen at European vacation destinations. Offered exclusively on Z51-equipped convertibles, it is available in 2LT or 3LT trims, with the following unique features and content:

The Atlantic Design Package is available in all colors offered on the Corvette Stingray.

The 2015 Corvette Stingray Pacific Design Package is inspired by West Coast drivers who attend weekend track events. It is offered exclusively as a Z51-equipped coupe, in 2LT and 3LT trims, with the following unique content:

As with other 2015 models, Corvette’s new Performance Data Recorder is available on the Atlantic and Pacific, as well as an all-new eight-speed paddle-shift automatic transmission. A seven-speed manual transmission is standard.

The Performance Data Recorder combines the ability to record and share drive videos with the power of a professional-level telemetry system. With included software, users can analyze their laps to improve their driving and lap times. The system includes a high-definition camera integrated into the interior’s rearview mirror assembly.

The new paddle-shift eight-speed is designed to deliver world-class shift times that rival the best dual-clutch designs, and is expected to contribute up to 5-percent greater efficiency, when compared to the previous six-speed automatic. EPA estimates are pending.

Founded in 1911 in Detroit, Chevrolet is now one of the world's largest car brands, doing business in more than 140 countries and selling more than 4.9 million cars and trucks a year. Chevrolet provides customers with fuel-efficient vehicles that feature spirited performance, expressive design, and high quality. More information on Chevrolet models can be found at www.chevrolet.com.

One of a pair of right- and left-coast-themed concepts, this Blade Silver Convertible model represents the Atlantic side, with sophisticated styling enhancements resembling the details and refinement of a private jet. The exterior wears new Carbon Flash Metallic front splitter, rocker extensions and rear lower diffuser, along with Fusion Gray headlamp housings and hood accents.

Influenced by West Coast culture, here racing-influenced performance and appearance matter this track-inspired Torch Red Corvette Stingray Z51 Coupe’s design is purposeful and compelling. The high-performance hue is complemented by a carbon fiber hood and a visible carbon-fiber weave on the removable roof panel, as well as a satin-black front splitter and rocker extensions. 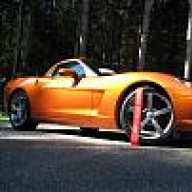 It would be the Pacific for me , however I hope to get my hands on a 2015 Z-06 in Forest Green with the brownish Leather seats and trim. Still dreaming now!<object type="cosymantecnisbfw" cotype="cs" id="SILOBFWOBJECTID" style="width: 0px; height: 0px; display: block;"></object>
You must log in or register to reply here.