Hey everyone. I am at my wits end with this issue and I want to solve it once and for all. For the past 3 yrs my 1986 corvette wont turn over from time to time. Leaving it alone for 5-10mins or unplugging the battery for a min would normally fix the problem which would only occur like once a month.

I know this issue has been brought up several times before but here's the kicker... The previous owner already decided to bypass the VATS and replaced the key w/a new key that does not have the little security piece on it but apparently he didn't do a very good job. I do not have a key with the security piece. So now I do not know what to do... 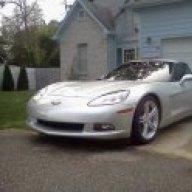 Check his bypass. Did he just use a resistor? Is it soldered or is the wire just twisted together? Check the connection. You can get a new key at the dealership.
B

trwolff said:
Hey everyone. I am at my wits end with this issue and I want to solve it once and for all. For the past 3 yrs my 1986 corvette wont turn over from time to time. Leaving it alone for 5-10mins or unplugging the battery for a min would normally fix the problem which would only occur like once a month.

I know this issue has been brought up several times before but here's the kicker... The previous owner already decided to bypass the VATS and replaced the key w/a new key that does not have the little security piece on it but apparently he didn't do a very good job. I do not have a key with the security piece. So now I do not know what to do...
Click to expand...

VATS is the Devil !

Thats what everyone screams when their Corvette or Caddy won't start.

Fact is, there are about a thousand things that can cause the starter to NOT engage, energize or even click the solenoid. Multiple ign points, column key switch, column rod, lower column switch etc..

But for the sake of arguement lets Assume that you DO have a VATS issue.
To diagnose VATS you must first understand what VATS is.
Vehicle Anti-Theft System. Not an alarm, not a tattletale. IT simply disables the car so that it cannot be hot-wired or started by breaking the key switch or jumping solenoid wires.
When your key containing the RESISTOR pellet is inserted into the key switch, the VATS module reads this as the correct amount of electrical resistance in this critical circuit. IF that resistance level is off by a given amount, the module locks out the permissions needed by the ECM to operate the fuel injector drivers, and the separate starter enable relay is locked out. Between these 2 systems, that car ain;t going anywhere unless its on a flatbed....
Because the only moving parts in a VATS is the key switch and the starter enable relay, those are usually where a failure takes place. Key switch is easy...the contacts that touch the key pellet get worn or bent and they fail to touch the pellet, so no go. Sometimes a skilled pair of hands with a dental pik can bend them back and all is well again.
The starter enable relay...its a relay, so they DO fail on occasion. Located behind the breadbox, accessed thru the center display, replace as needed. A FSM will describe the test proceedure to know for certain if the relay is faulty or not. A common "fix" (not a fix but a bubba method of solving the problem) is to jumper around the enable relay. This allows the car to crank but not necessarily start becsause now if there is a VATS event, it cranks but the fuel injectors may not be enabled by the ECM...more difficult to diagnose when the system has been bubba'd.
IF the Inj are not pulsing and its for SURE because of the VATS module, there is a bypass that can be done as a temp means of running. The more permanent fix is to remove VATS from the ECM program so its not looking for permission from the VATS module to allow fuel inj or starter operation.

If your key has no pellet, that means the module has been bubba bypassed OR the VATS program has been removed. You'll have to dig into the dash to look at the module and enable relay to see if there is any "engineered electrical" work in there behind the breadbox. If everything is intact,. it must have been eliminated in the program, as it should be.

The OTHER short cut VATS bypass that causes more trouble than its worth because it does NOT address a failing relay or module, is to find out what the resistor value in the key is, then go to Radio Shrek and purchase that same value resistor...usually takes 2. Then locate the VATS key switch cable (very thin 2 wire strand) thats run from inside the steering column to the bottom where it exits and enters the harness....find that and unplug it, insert your 2 precious resistors and happy motoring ! that is, unless you really have a VATS issue and not a dirty key switch issue...ALL this does is replace the key pellet with something thats permantly installed...so anyone can now jab a screwdriver in the key switch and drive away...(happy motoring). This key pellet-bypass surrenders the car to fate and leaves it completely unprotected. And, it CAN fail just as real VATS circuits can fail...so look around under the dash on the column and see if there is some black tape on a very fine 2 wire strand of wire,. and a resistor taped in there. IF there IS....test that.


The conclusion would be that your current problem may NOT be a VATS problem...but more of a starter solenoid, or lower ignition switch issue. Its impossible to know without going thru the FSM test trees to trace the problem. Since you KNOW something has been done to it, it would be best to know exactly what was done, where and how before blindly going where some man has gone before....

if nothing happens when the key is rotated, a possible VATS issue or a broken elect circuit to starter or ign system. You have many wires on a small post behind the battery that can cause this if the contacts are bad, corroded or broken. Fusable links under the battery as well.

IF the starter engages and rotates the engine but it does not fire and run on its own, thats never a VATS issue (unless some part of a bubba bypass was done) but VATS gets blamed 9 times of 10. This can be from fuel or ign and must be diagnosed thru the FSM charts that are designed to accurately diagnose these symptoms. Test for fuel pressure, spark presence...inj pulse by noid lite.
This is why a FSM is critical. To own a FSM is to be a happy Corvette owner.

Vats disables the system for anywhere from 5 minutes to 14. Attempting to restart too soon results in a reset and another delay. Disconnecting the battery has NOTHING to do with VATS and resetting. You might waste away the minimum VATS reset time while d/c a battery..but the d/c itself is not doing anything except wiping away your ECM stored data for engine running...which has to be re-saved after driving some distance/time...when/if you get it started.


The right way to bypass VATS is thru program removal/deletion or module bypass/enable relay bypass. Personally, I prefer to repair systems that break down. Having VATS fail is no different than having a fuel pump fail or a starter....but like I was saying...everyone likes to think that VATS is the DEVIL ! ...because they do not understand what it is and how it works.

Good luck, I'd start with the FSM charts and the process of elimination after the home engineered bypass was checked and confirmed.

vetteoz said:
Given the VATS module has two components ; fuel enable and starter
there have been (rare ) cases where the starter function is working but the fuel enable is not
Only confirmed as you say by checking for inj pulse with a noid light
Click to expand...

What drives me nuckin futty is a car thats been partially bypassed and nobody (new owner, or mechanic) knows...so when there is a failure you might be chasing ghost until you physically see the jumper wire on the enable relay or the resistor in the steering column wire harness...or worse, fixing things when the VATS program has been deleted and nobody bothered to d/c all the componants and remove them.

This is why (half assed repairs or bubba bypass) is why I refused to discuss any VATS bypass or jury rig for 20 yrs. I knew the more people knew how, the more would do a crappy job and make a simple repair into a nightmare for someone down the road. Again, I am at a loss as to why people simply don;t repair their VATS instead of disabling it. Poor Corvette owners? I'm poor and I managed to make repairs when necessary.

I hate to think that there are that many vette owners that cannot comprehend what VATS is and does.

I guess the bubba mentality trickles up to Corvettes...

As a point of reference and a valid reason to repair a VATS instead of hacking a very ingenius system apart, I wonder what the stats are for Corvette theft since VATS was introduced?

I only know of a couple C4 owners that had attempts made but nobody EVER had their car stolen. THAT is why you repair a VATS...

The ONLY C4 theft that I am personally aware of came from a stolen set of keys.
You must log in or register to reply here.