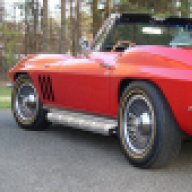 I read earlier posts on how to unlatch the hood if the release cable breaks - but my problem is a bit different. The drivers side unlatches but not the passenger side. Does the passenger side latch have the same release lever underneath as the drivers side? Also, any idea what would cause one latch to release and not the other?
Was really nice out today - my wife and I took the car out for 80 miles going nowhere in particular. !!! Even a stuck hood release couldn't spoil the buzz.
Thom C

The latches are very similar. However, the driver's side has a lever below it that is pulled toward the firewall when you pull the hood release in the car.

The passenger side is pulled toward the driver's side by the cable that runs between them. 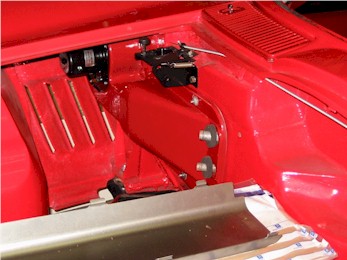 The cable between the two may be loose or broken.

In the photo, you can see the spring on the side of the latch.

Thanks for the help. Your car is so clean and beautifully put together - it's like an AIM with color pictures.

So did you get it open yet

Bob's advice and diagnosis were spot on. Removed the splash guard, reached up and pushed the release arm forward - no problem. Looking for the problem I think I uncovered my first case of "Bubba Engineering". The hood cable did snap at the RH catch - and looking closer at the actual cable it appeared thinner than the one coming from the release lever to the LH catch. Just to be sure I checked it against the cables in the rear deck release and they were thicker too. Looks like the original hood cable broke some time ago and was "repaired" with something other than a real replacement part. The correct parts are on the way from Long Island Corvette (along with some other goodies - since I'm already paying shipping, the more you buy, the more you save!)

While I was under there I could see that my annoying oil drip is coming from around the timing chain cover/fuel pump area. I think I'll defer this one to a real mechanic to sort out. Talking to other Corvette owners at local shows and cruise-ins, many have recommended Corvette Paramedics here in NJ. I'll probably bring the car in for a once-over before winter hibernation (that is, if I can stop spending $$$ on shiny new visor hardware or glovebox rebuild kits! Ahh - the fun of it all!!)

Thanks again for the help!
Thom
Thom C
J

Check to see that there's a bolt in the upper hole of the two in the bosses directly below where the passenger side of the water pump attaches (those two holes on each side were used for '55-'57 passenger car motormounts); the upper hole goes through to the fuel pump pushrod hole, and oil will leak out of it if it doesn't have a bolt in it, and it will look like a timing cover/fuel pump oil leak. Don't use a 3/8"-16 bolt longer than 1/2", and put thread sealer on it. Many guys aren't aware of the need for this bolt - I see lots of SB's with no bolt in the hole, and oil all over the passenger side of the block and oil pan.

This should be the quote of the month

quote of the day

Glad you got a kick out of that one. Twisted Corvette logic - it goes hand in hand with "It'll only cost more next year".

Went looking for the bolt that JohnZ was talking about - hoping it wouldn't be there - but there it was. Tomorrow I'll take it out, lather it up with thread sealer, and put it back. Then I'll wipe down that area with citrus degreaser (thanks for the tip Tripleblack - that stuff works like a charm) and keep an eye on it.

JohnZ said:
Check to see that there's a bolt in the upper hole of the two in the bosses directly below where the passenger side of the water pump attaches (those two holes on each side were used for '55-'57 passenger car motormounts); the upper hole goes through to the fuel pump pushrod hole, and oil will leak out of it if it doesn't have a bolt in it, and it will look like a timing cover/fuel pump oil leak. Don't use a 3/8"-16 bolt longer than 1/2", and put thread sealer on it. Many guys aren't aware of the need for this bolt - I see lots of SB's with no bolt in the hole, and oil all over the passenger side of the block and oil pan.

:cry Stop it John. Now you're just showing off.

Okay, I'm crawling all over and under my car again until I find something than John doesn't have an answer for. Honest. I don't care how many years it takes.

Related Question to the Hood Latch Problem on C2's

I have a similar, but possibly more complicated problem with my 1964. when closing the hood last time, I must have pushed a little too hard on the drivers side of the hood where it latches, and it seems to have stuck too far down in the hood latch. Case in point, it is now stuck down about 3/8 of an inch too far and is not flush. We have tried with three of us, gently but firmly pulling the cable and trying to lift the hood, but no luck. The quick solution was to get in and drive my recent barn find down the Southern California Coast and temporarily forget about the problem. funny, when I got home the problem was still there but I felt better!!!! gotta enjoy the car first....

The driver side latch does appear to disengage, just as the passenger side does, but again the latch does not release the "hood lock latch pin" part of the hood. any suggestions?

On a related subject on closing the hood in the future: my technique for closing the hood has never been a problem with my other C2's, but this car is new to me and needs a little work. My technique is to hold the hood back to release the 'hood support bar' and slowly bring the hood to within a few inches of the body and let is drop. then I would gently press the hood closed on both sides if it did not engage. I never slam a door, a hood or a deck lid, I just press them down with firmness. thanks in advance to all who post and reply....I just signed up now that I have my new baby.
S

Just joined the Forums as I have been helped by the information that I found when searching for a solution to a problem. I wanted to first thank everyone who contributes their knowledge as it is extremely valuable when you run into something that you haven't done before.

My issue was a stuck hood but only on the passenger side. After reading the posts here, there were answers, but none seem to match my particular situation. However, there was enough to get me started in arriving at my actual solution. My hood problem was on my 66' 427 with factory air. With the outside airbox mounted where it is, there is essentially no way to reach the passenger hood latch from below with your hand. The cable that extends from the drivers side latch to the passenger side latch was the issue as it was broken and not engaging the latch. After studying the way the latch operates, I found that there is a spring that holds the latch closed when the cable isn't being pulled to open the latch. So, if that spring was removed, the latch is basically free to open. The question was how to remove the spring. With the car on my lift, from underneath, looking up along the engine side of the airbox, the spring was visible. There is just enough room to get a "broom handle" or other long device (I used a piece if 1/2" emt pipe I had in the garage) up to the spring and push it hard enough to pop it out of the hole it is mounted in. Even if I broke the spring, it is a less than $5.00 part, so I wasn't concerned about possibly breaking it. After 2 or 3 tries, I popped the spring off its mounting spot, crossed my finger and lowered the car. I grabbed the drivers side of the hood and when I tried to raise it, the hood open and I was able to see the broken cable. Upon inspection of the passenger side latch spring, no damage other than a slight bend in the original open curve that hooks in the latch spring support hole. Hooked it back in the hole and the latch functioned as normal. Ordered the replacement cable and supporting hardware and everything is back to normal. So for those who have a car with factory air and a stuck hood on the passenger side, try to pop the spring latch loose and your hood has a good chance of opening up.

Good information and welcome to the Corvette Action Center.