I've been fixing my dads 75 Vette for a while now. It starts and runs with a battery in it, but the big problems are the brakes and the power steering (or lack thereof).

I've narrowed down the brakes to the rear calipers needing replaced. I came to this conclusion after attempting to bleed the system, snapping a bleeder off inside one of them and then pulling them off and seeing the rust on the inside of the pistons. Fronts were clean, maybe could use new pads somewhere down the road.

The PS is a bit trickier. I think its the PS control valve due to the copious amounts of what appears to be PS fluid dripping from the valve. I can't rule out the slave cylinder from leaking either, but it might just be drippings and runoff from the control valve.

My question is whether I should keep the (possibly) original calipers or turn them in as a core for remanufactured and sleeved new cylinders, or should I try to remove the broken bleeder the hard way and rebuild the calipers with new o-rings and other hardware.

Same goes for the PS Control valve. Is it better to just buy a remanned whole unit or rebuild the one thats already in there? The rebuild would cost $20 for a kit and the new unit would be between $100-250.
Last edited: Jul 3, 2015

1st Welcome to CAC!!!
enjoy..
now....for my money I would replace the calipers..with out a doubt
saves a whole lot of headaches!!!!!

As for the power steering....make very sure your power valve is leaking and it is not being dripped/leaked on from the
power steering pump or any of the hoses.they could be leaking on it and make it look like the PS valve is leaking
(ask me how I know).....
some brake clean on the valve and watch to see if there are any leaks from above!!!
if it is the valve a rebuild kit is much less expensive,if you are mechanically inclined.if not buy a rebuild!
don't hesitate to ask any more questions when you get them!!!!

For the brake caliper, if there is corrosion in the bore (or if they don't have a stainless sleeve) then send them in as a core. Otherwise you could replaces the seals and (and pistons if needed) yourself. But like bill said it's a lot easier to just get the new ones. 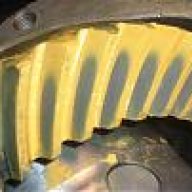 Sounds like there is moisture in the system and if the calipers are original you're going to need a complete brake kit to resolve it. Look at Muskegon Brakes packages, I have used them with success. Look at the hard lines for signs for rust.
Gary
GTR1999
N

GTR1999 said:
Sounds like there is moisture in the system and if the calipers are original you're going to need a complete brake kit to resolve it. Look at Muskegon Brakes packages, I have used them with success. Look at the hard lines for signs for rust.
Click to expand...

The fronts were spotless for the most part. I've heard from other sources that the rear calipers were just prone to this sort of rusting. I was extremely suspicious of the lines for a while but i've been up and down them with and they are spotless.

i'm on a bit of a tight budget atm so the biggest expenses I can see being necessary is a new good battery and both rear calipers. The PS rebuild kit looks good and after degreasing the steering box everything looks clean except for the Control Valve.

Now if only I could get the headlight to stop winking...
You must log in or register to reply here.