The motor does not run on my C5 2003 telescopic steering column. I’ve already run the soft resets but all I hear is a click. I then removed the drive cable from actuator and then the motor runs freely from the switch. I assume there is something stuck in the actuator, but I’m not sure. Does anyone have an exploded view of the steering column and actuator?
A 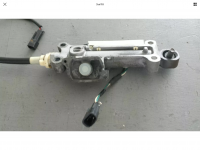 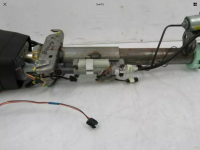 I was able to find these images of the Telescopic drive mechanism. It appears to be attached to the steering column with male torx bolts, so I’ll need to buy some female torx sockets before I attempt to remove it.
A

I then pulled drivers seat, disconnected the car battery and found that black wire “B” in the Blue connector had no continuity through the connector. I repaired the connector for a good contact, but it did not fix the problem. The column will still NOT go “in” using the switch. I am now showing DTC SCM Code B2860H, whereas, it showed B2860HC before repairing the black wire in the Blue connector. Obviously my repair to the connector is good by no longer indicating “C” in the DTC code. I’m recharging the car battery now. Does anybody have other suggestions where to look?
You must log in or register to reply here.

A
Help! Telescopic steering not working