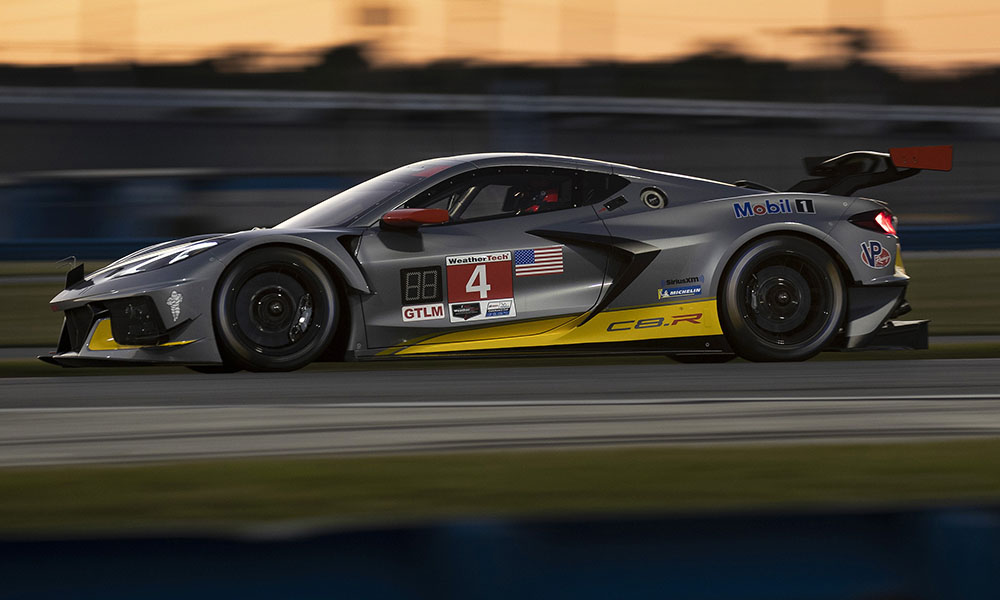 Below is a press release from Corvette Racing announcing that the Number 3 and 4 Corvette C8.R were leading GTLM.

However, as of this writing at 6:45 AM, Antonio Garcia in the Number 3 car just fell to second behind a BMW with Tommy Milner in the Number 4 car in third.

DAYTONA BEACH, Fla. (January 30, 2021) – Corvette Racing ended the first quarter of the Rolex 24 At Daytona just as it started: first and second place in its class. Alexander Sims led Nicky Catsburg by less than two seconds as the pair of Chevrolet Corvette C8.Rs flexed their muscle in the GT Le Mans (GTLM) category of the IMSA WeatherTech SportsCar Championship.

Both Corvettes swapped the lead in the first six hours as they avoided much of the same trouble that befell other cars in the opening portion of the race. A total of 46 cars took the green flag, which saw Tommy Milner hold the lead from the GTLM pole in the No. 4 Mobil 1/SiriusXM Corvette for the first 20 minutes before Antonio Garcia moved ahead in the No. 3 Mobil 1/SiriusXM C8.R for the bulk of his stint.

Both Milner and Garcia drove three stints before handing over respectively to Nick Tandy and Jordan Taylor. The two Corvette teammates took turns in the lead before Tandy regained the advantage for the No. 4 Corvette team just past the four-hour mark. The two C8.Rs ran in that position through the six-hour mark.

TOMMY MILNER, NO. 4 MOBIL 1/SiriusXM CHEVROLET CORVETTE C8.R: “It was a pretty eventful start for some of the cars behind us, and we had some good racing for two or three stints. There is a long way to go, but so far the Corvette C8.R is fast and comfortable. Our guys are doing a great job in the pits so far. We need to keep all this up and see where we are in 18 hours or so.”
ANY SURPRISES IN THE OPENING STINT: “I think with the P3 cars we maybe expected a little bit more trouble with them in some sense. But so far on the restarts when we’ve been close to them, it’s been hectic for sure but everyone is driving within their limits it seems like. We haven’t had too many problems. Hopefully it stays that way.”
ON THE UPSHIFT GLITCH EARLY IN THE RACE: “Coming out of Turn 6 we had a false neutral with the gearbox. We had changed some procedures in the car where if that did happen to make it faster for us to get it back in gear. We’re still struggling with that so it took me a little bit longer to figure out how to get the car back in gear. Once I was able to do that, I didn’t lose too much time and I was able to close the gap again with traffic. All in all, it wasn’t too bad. It could have been worse but for sure it’s something we’ll have to keep an eye on.”

ANTONIO GARCIA, NO. 3 MOBIL 1/SiriusXM CHEVROLET CORVETTE C8.R: “My stint was pretty much the same as Tommy. We went through every single position, I think – leading, second, third and fourth. Everything has been decent so far… no big deals. There is still quite a long way to go, and as we have seen there will be lots of mistakes out there with a lot of traffic. We need to be fast and keep track position, but we also need to be very smart, too.”
ANY SURPRISES IN THE OPENING STINT: “Not really. Everything is running as we expected. GTLM is pretty close. We didn’t know how the contraction would be with LMP3. We seem to be a little bit faster. So far it hasn’t been too super difficult with them. Once the good guys in the P3s get to drive, maybe the pace will be a little bit closer. Other than that, it’s a close battle as always in GTLM and it will probably stay that way all the way through.”

JORDAN TAYLOR, NO. 3 MOBIL 1/SiriusXM CHEVROLET CORVETTE C8.R: “Generally that stint was OK. I was just sort of seeing how things were in the first stint. Definitely we are having to be careful on traffic this year with some of the new drivers and cars out there. I think we’re in a good spot right now, taking minimal risk and trying to take care of the C8.R to make sure we’re in for the fight at the end.”

NICK TANDY, NO. 4 MOBIL 1/SiriusXM CHEVROLET CORVETTE C8.R: “The Corvette is great. This is the first time we really put a full stint on a set of tires in race conditions. We didn’t really know what to expect. The car is good and the tire is good. The day is a very different thing as we look ahead to tomorrow. It’s a new toy for me and it’s fun.”
ON TRAFFIC: “The trouble comes when you get a certain class that comes around on a pit sequence. So you might get two or three GTDs that come out on cold tires or a couple of P3s out on cold tires, and that’s when it gets really nerve-wracking. You can kind of get stuck in there in a big group with eight or 10 cars together. So that’s something new and something to look out for. But so far it’s been pretty good.”
IMPROVEMENTS FOR NEXT STINT: “We need to work a bit on how the car is over the course of a stint. So we might have one type of balance in the chassis in the beginning when the tire is fresh and then an evolution of that as the tire gets older through a stint. We can work with the engineers and try to trim the car to be more consistent over a longer run. This is something we can look for.”