LE MANS, France (Aug. 22, 2021) – The mid-engine Chevrolet Corvette C8.R finished on the class podium in its 24 Hours of Le Mans debut Sunday with the trio of Antonio Garcia, Jordan Taylor and Nicky Catsburg placing second in the No. 63 Mobil 1/SiriusXM Corvette C8.R. 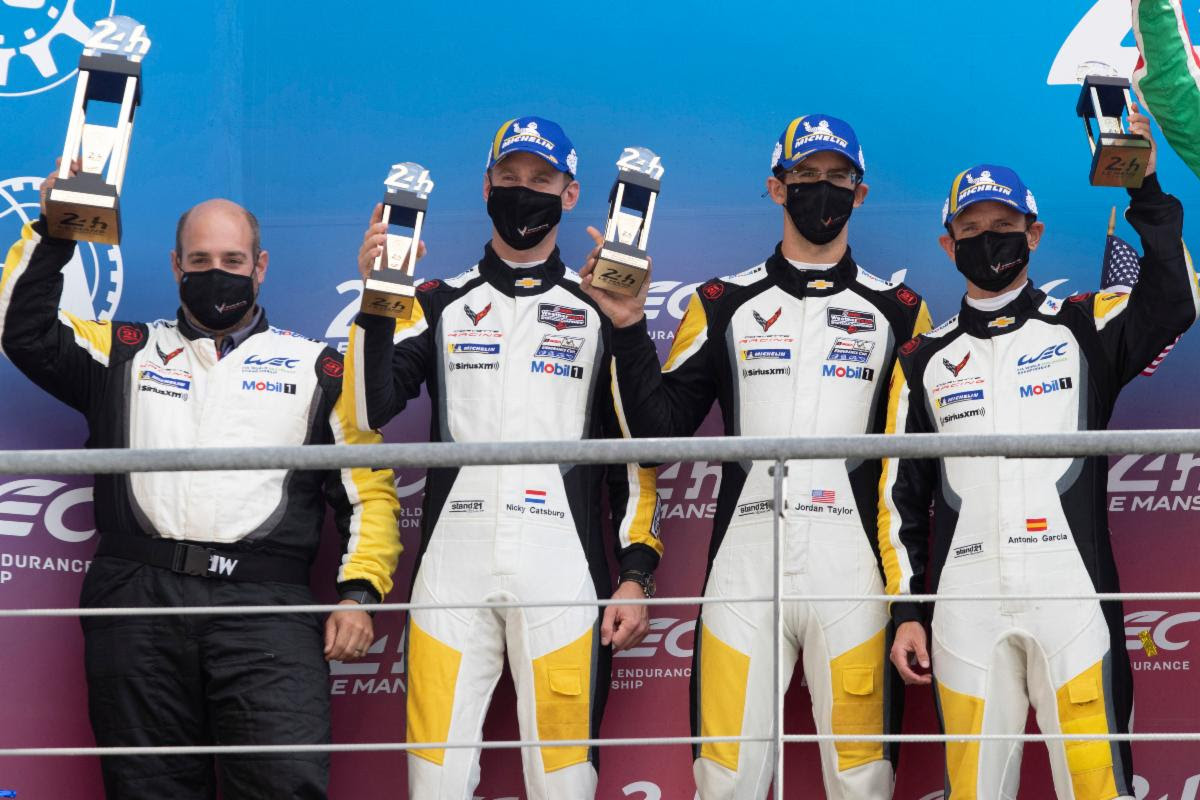 The debut of the mid-engine racing Corvette came a year later than originally planned due to the global COVID-19 pandemic. But the wait proved worth it with Corvette Racing showing its usual competitive spirit during its 21st race at Le Mans since 2000.

“Today’s second-place result in GTE Pro for the No. 63 Corvette C8.R and drivers Antonio Garcia, Jordan Taylor and Nicky Catsburg is a significant achievement as we debuted the mid-engine Corvette C8.R at Le Mans,” said Jim Campbell, Chevrolet U.S Vice President, Performance and Motorsports. “To be on the podium at Le Mans with the C8.R is very gratifying. It’s a testament to the hard work and determination of our Corvette production and racing teams.

“The support of Corvette owners and fans from around the world has been incredible,” Campbell added. “This race result is dedicated to our customers and supporters.”

While the No. 63 Corvette ran in contention for the entire race, the No. 64 C8.R of Tommy Milner, Nick Tandy and Alexander Sims seemingly ran into nothing but bad luck. It began on the roll-off from the grid when Milner was hit from behind by the eventual class-winning Ferrari at the beginning of the formation lap.

The contact broke part of the diffuser, but the No. 64 Corvette ran well early and even led in a wet start with Milner going to the fore. He and Tandy cycled through and kept the No. 64 C8.R in contention before the diffuser finally broke in the fifth hour shortly after Sims’ first stint.

It was the first of three visits to the garage for the No. 64 team, which also had to repair part of the gearbox, clutch and the alternator. Milner, Tandy and Sims – who set a GTE Pro record race lap of 3:47.501 – finished sixth in class.

On the No. 63 Corvette side of the garage, all three drivers drove double stints to open the race. Each of the trio led for a time as well as the race began to evolve into primarily a battle between Corvette and Ferrari, although five cars remained on the lead lap in GTE Pro at the halfway point.

Things began evolve into a two-car race into the final six hours between the No. 63 C8.R and No. 51 Ferrari. The Corvette team kept it close and was able to triple-stint its Michelin tires in the late going but couldn’t make up the necessary ground.

The No. 63 Corvette did, however, complete the entire 24 hours without a change of brakes.

ANTONIO GARCIA, NO. 63 MOBIL 1/SiriusXM CHEVROLET CORVETTE C8.R – FINISHED SECOND IN GTE PRO: “I don’t know if I prefer to be two seconds, 10 seconds, 40 seconds or three laps back. I think it hurts the same! We’ve been in that 30-second range between the two cars pretty much for 24 hours. I must say it does hurt a little bit. When you come so close, it’s difficult. But when you do your best, you run almost a perfect race and someone else does it a little better than you, you have to congratulate them. There is nothing we could do. I think we ran a perfect race regardless of our position. We finished second but very close for sure. They just did it 40 seconds better than us. I’m very happy for the team, the 63 crew, Jordan and Nicky – all six drivers had really, really good drives and helped develop this Corvette and for sure all the engineers. So even if the 64 had so much trouble, getting up to this point we have all been working together to get the most out of the C8.R. For sure, two of our cars up front would have put even more pressure on the 51. We were both alone so it was a one-on-one fight between Corvette and Ferrari. We were close. When you are up on the podium, you always want a tiny bit more. I would have liked to have given Corvette the first Le Mans win in the C8.R. Now we need to wait until next year and work harder.”

JORDAN TAYLOR, NO. 63 MOBIL 1/SiriusXM CHEVROLET CORVETTE C8.R – FINISHED SECOND IN GTE PRO: “That’s my fourth podium here. It’s hard to complain with a podium at Le Mans. But when you come this close, it’s difficult to take. The Corvette Racing guys did an amazing job. We didn’t have any issues with our car. We executed really well strategy-wise and in the pitlane and on the track, there were no mistakes. For our first run at Le Mans with the C8.R, we should be pretty proud of that to come home second against some cars that have run here the past few years. We learned a lot as a team and can come back stronger next year.”

NICKY CATSBURG, NO. 63 MOBIL 1/SiriusXM CHEVROLET CORVETTE C8.R – FINISHED SECOND IN GTE PRO: “It’s super nice. This is my third time at Le Mans, and the first two times we finished nowhere. To be in the fight right to the last lap was very cool. It went well. The C8.R was very good. I had some good stints and nothing really bad happened. I will go home with some positive feelings. P2 kind of feels like a loss, but on the way home I’ll be like, ‘We finished P2 at Le Mans. That’s not bad!’ We had a cool fight with the Ferrari, and I think we did well.”

TOMMY MILNER, NO. 64 MOBIL 1/SiriusXM CHEVROLET CORVETTE C8.R – FINISHED SIXTH IN GTE PRO: “It was a very frustrating race for us. It wasn’t taken away from us right at the start, but a pretty good indication looking at the damage from the contact before the race started with the Ferrari that it was going to be a big problem for us. It ended up being such that we had more problems after that. It’s hard to say if that initial damage caused some of the other problems we had. It’s very unfortunate and unlucky… unnecessary but in the end we turned it into a test session in a lot of ways. We tried to go as fast we could to learn as much as we could about the C8.R and find anything that in future may or may not be a problem. Our focus turned from going for a race win to helping the 63 guys do whatever it took to get them the win. Unfortunately that didn’t materialize; I think the Ferrari had just a little bit too much pace compared to everyone else. From our side, it’s disappointing but for the team, second place is a good result. It’s not the result we were all looking for but we can be happy about our performance today.”

NICK TANDY, NO. 64 MOBIL 1/SiriusXM CHEVROLET CORVETTE C8.R – FINISHED SIXTH IN GTE PRO: “Endurance racing is not an easy game. Sometimes you win and sometimes you lose. This time on our side of the garage, we didn’t have the smoothest of runs. But I really enjoyed the week. I’ve enjoyed being with Tommy and Alex being in the car again. I’m proud of how we managed to get the speed out of the car. Honestly, it’s probably the nicest racecar I’ve had to drive around this circuit – to be consistently fast and confidence-inspiring… I’m really proud of everyone who worked to give us a car with that performance. The reliability didn’t go our way this time, but we can be proud that we have one car on the podium. It’s a great experience with the new C8.R and hopefully we will come back fighting stronger next year.”

ALEXANDER SIMS NO. 64 MOBIL 1/SiriusXM CHEVROLET CORVETTE C8.R – FINISHED SIXTH IN GTE PRO: “Everybody comes here to win, knowing that even if you have a super-fast car, there are so many opportunities for things not to go perfectly – reliability, drivers making mistakes, slow zones and safety cars. There are so many factors, and this time we had a couple of those go against us. Nevertheless, to get my first finish at Le Mans was good. I got a lot of great experience with the C8.R . It was brilliant to drive through the entire race. It’s a shame not using that pace to fight for the podium positions. I’m proud of the whole team. The effort they put in was remarkable. They got the changes made in the pits very, very quickly for such big fundamental changes that needed to be done. Well done to the 63 car for getting the podium. On to the next one.”