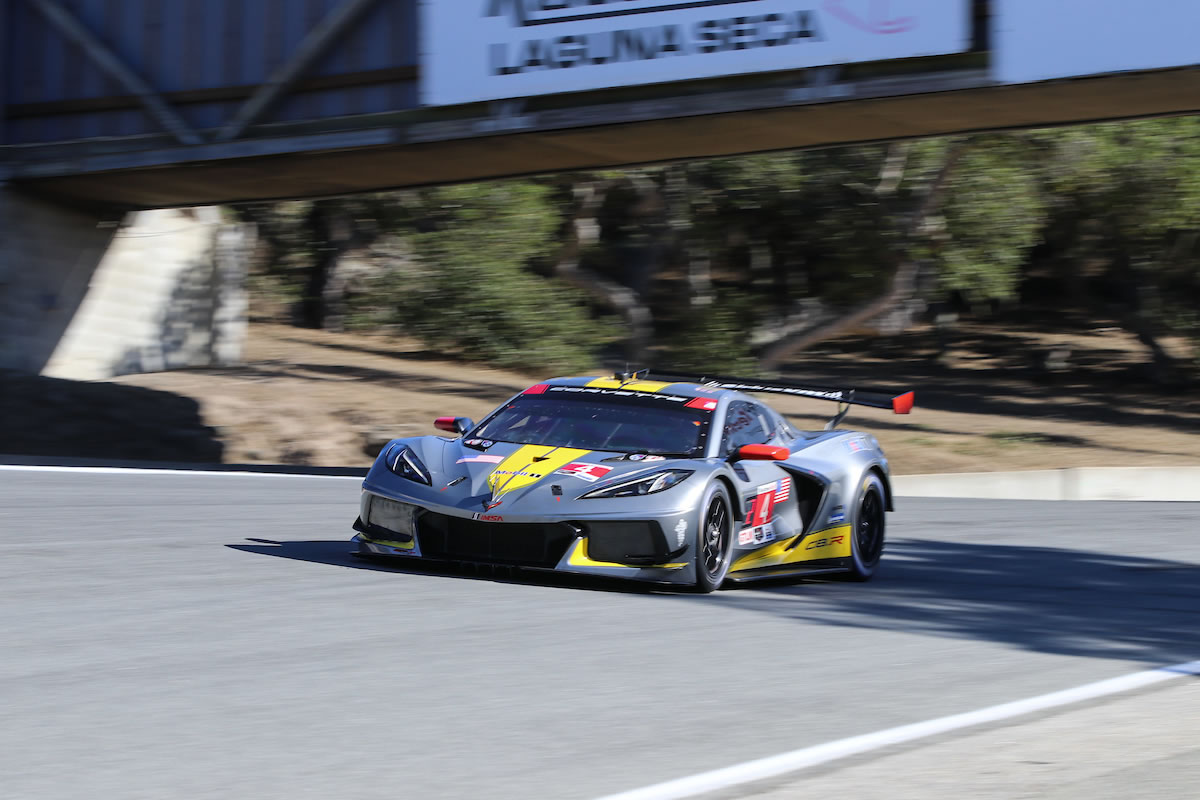 CORVETTE RACING AT LAGUNA SECA: Long-Awaited Victory for No. 4 Corvette​

The duo scored a one-lap victory – their first full-points win of the year – at WeatherTech Raceway Laguna Seca for Corvette Racing’s first triumph there since 2014. It came as the program marked 23 consecutive years of racing on the Monterey Peninsula.

GTLM Drivers Championship leaders Antonio Garcia and Jordan Taylor placed second in the No. 3 Mobil 1/SiriusXM Corvette as the pair of mid-engine C8.Rs combined to lead every lap Sunday. 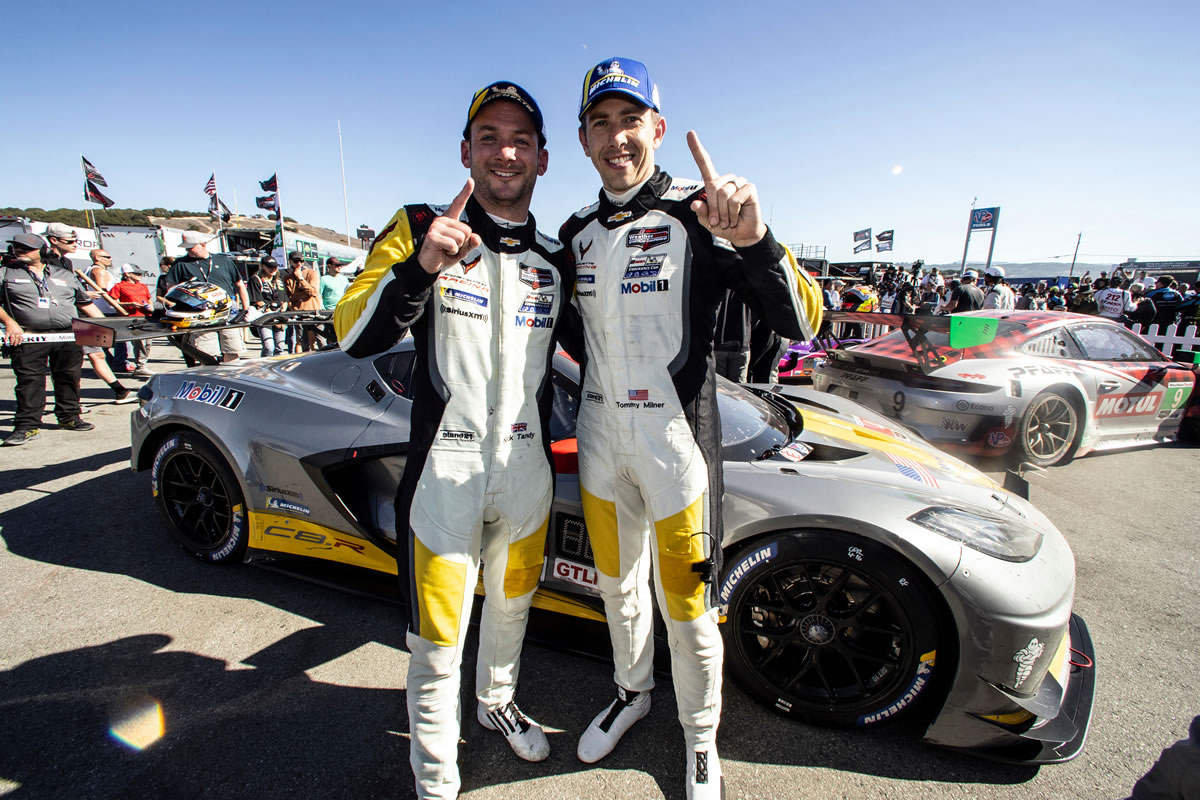 Milner and Tandy won a non-points race earlier this year at Detroit, and the No. 4 Corvette also won a 100-minute qualifying race ahead of the Rolex 24 At Daytona in January. Sunday was a break-through for the pairing in scoring maximum race points.

Milner started second in class and drove the first 58 minutes of the two-hour, 40-minute race before handing over to Tandy, who drove a double-stint to the end. He finished a lap clear of the sister Corvette as each car in the category made two stops due to a two-hour, 26-minute, green-flag run to the finish.

Taylor led for the entirety of his stint to open things in the No. 3 Corvette, which was the first of the C8.Rs to stop at the 51-minute mark. He handed off to Garcia, equipped with a full tank of fuel and fresh Michelin tires. Milner followed suit a couple of laps later, and Tandy set off in hot pursuit of the No. 3 C8.R. 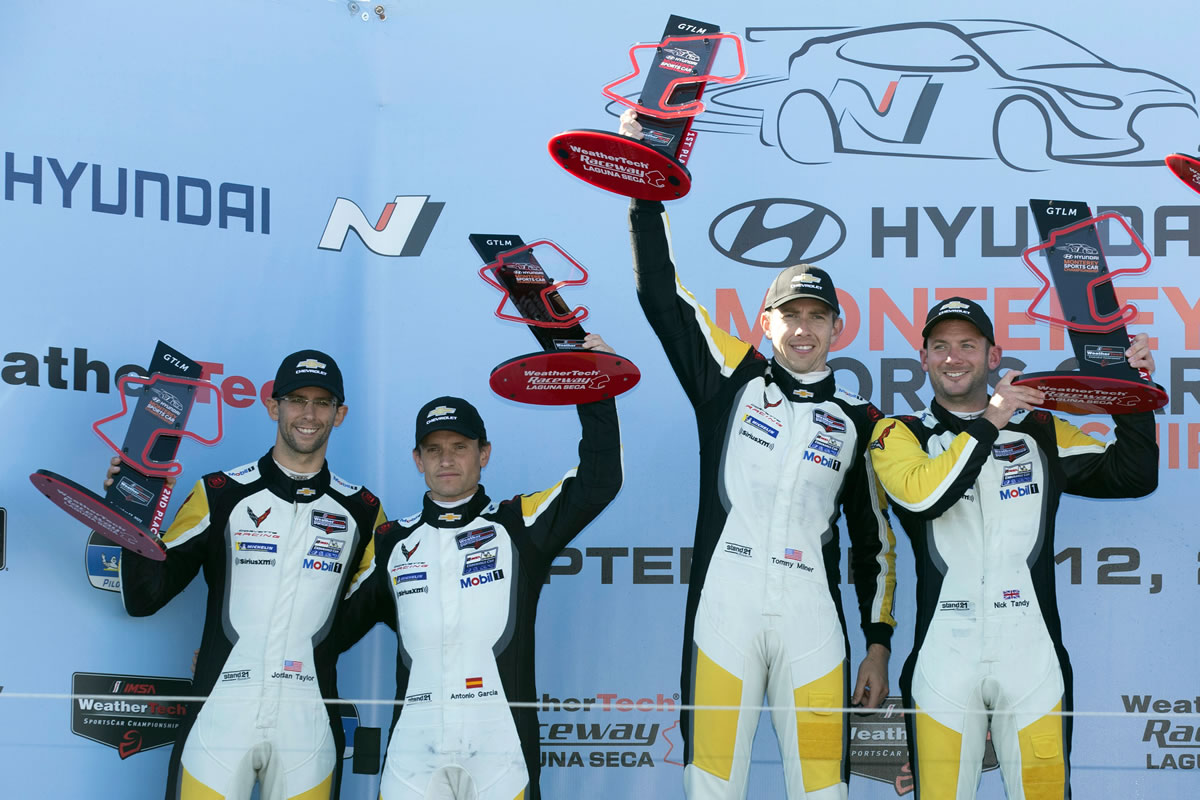 He and Garcia engaged in a spirited battle with the two exchanging fastest GTLM race laps multiple times. Tandy, who set a GTLM track record at 1:21.827 (98.461 mph), got alongside his teammate at one point and inherited the lead for good when Garcia made his final stop with 49 minutes left.

The No. 4 Corvette came in a lap later and came out just ahead of Garcia, despite a trip through the gravel along Laguna Seca’s winding pitlane exit. Undeterred, Tandy slowly but steadily built a gap over Garcia to the end of the race.

Corvette Racing returns to action at the Acura Grand Prix of Long Beach on Saturday, Sept. 25.

TOMMY MILNER, NO. 4 MOBIL 1/SiriusXM CHEVROLET CORVETTE C8.R – GTLM RACE WINNER: “For us on the 4 car side, it feels like we have a monkey off our back a little bit with getting a full race win. We’ve had really fast Corvettes all year long, even last year with Olly (Gavin). For one reason or another, we couldn’t put it together – problems here and there, driver mistakes, problems on the pit stops, whatever it was. We’d have fast race cars but one little thing would trip us up. When you’re racing against guys like our teammates Jordan and Antonio… those guys are obviously on their game. Credit to those guys. They’ve done a phenomenal job for the last year-and-a-half and perfect pretty much all the time. It feels great today to get that win. We had a little issue with the car that felt like déjà vu as usual with something going wrong. Fortunately it didn’t put an end to our race and we were able to finish it out on top.”

WHAT WAS THE ISSUE WITH THE CAR? DID YOU FEEL LIKE YOU HAD THE MEASURE OVER THE 3 CORVETTE? “It looked good at the start. The car felt really good, the balance was great and pace was good. We had talked about splitting strategies between the two cars. Whoever was out front would do a three-stop and whoever was next would do a two-stop. I was just saving tires and fuel as best I could and wait for the opportunity for the 3 car to pit, then use everything left in fuel and tires before we stopped and hopefully have an advantage. The yellow kind of put an end to multiple strategies there. Still, saving tires helped me quite a bit in the first stint. Because the car was as good as it was, we were able to save tires… we weren’t driving it absolutely for every last little bit possible and killing the tires. This track is so tough on tires that you have to be nice to them to have good ones at the end.

“The problem we had, maybe I’m making a bigger deal out of it than it actually was because in the end it didn’t affect our race. It was an alternator issue. It was still functioning but it wasn’t functioning as well as it should. There was some concern for a little bit and it was a little hot in there for a little while. But in the end, everything was OK and the team was happy with the state it was in. When you hear that radio transmission, your first thought – especially for us – was here we go again. That wasn’t the case today.

“The Corvette was fantastic. The balance lately has been good. Here again today it was really good. It was great to finally show a result for all the hard work that all the crew guys have put in for so long. They deserve a lot of credit. They’re here first at the track and leave last. Those guys want to win just as much as we do. It’s frustrating for them to have little issues and not get a result. So I’m happy for Nick and myself, but most of all I’m happy for the crew guys on the 4 Corvette who have soldiered through quite a bit over the last year or two with these new cars and getting the result they deserve.”

NICK TANDY, NO. 4 MOBIL 1/SiriusXM CHEVROLET CORVETTE C8.R – GTLM RACE WINNER: “I’ll echo a lot of what Tommy said. My first year with Corvette Racing has been such a kind of mixed set of emotions. The car is great. It’s great working with this team in a superb atmosphere with guys that know exactly what they are doing. We were just kind of missing that final result. We had the win at Detroit, which I’ll always count as a bona-fide win, but we haven’t had a points-paying win. It was getting a little bit long in the tooth. Going to all these races, running well and up front, we just weren’t winning races… it was similar the last time out at Le Mans. It’s great to get that slate wiped and know that we still have three more races this year. We’ve got momentum. The car was fantastic all weekend. It gives me hope and looks good for the rest of the season. It’s been such an emotional roller-coaster. A lot of the time, you think you put the work in and you just see the result just in front of you but it just doesn’t get there. To finally get there and stand on the top step with my buddy, it feels good. We want to do it three more this year.”

THE LAST PIT STOP: “When you’re racing guys like Jordan and Antonio in the 3 Corvette, you’ve got to be on your game and you can’t afford to give away any time. The problem is that the previous stint I exited the pit and braked way too early (before returning to the track) and thought I’d given up too much time. Knowing it was going to be close on where we were going to come out on the last stop, I braked a little later – not by much! – but she didn’t want to stop. The front wheel locked and took a little trip across the gravel. I managed to get back into the pit exit before blending on the track. There was no real harm done. We gave up a little bit of time but we still managed to stay in front.”

ANTONIO GARCIA, NO. 3 MOBIL 1/SiriusXM CHEVROLET CORVETTE C8.R – SECOND IN GTLM: “It was good for a 1-2 finish for Corvette and that we could cover the Porsche on any possible strategy. Having such a clean race with just one yellow made things a tiny bit easier. Today it went our way. Another Corvette 1-2 even if it was another super-tight battle with our teammates. Those are always fun to have. As I’ve said many times, there is no worse adversary than your teammates because they have the same tools. Whatever advantage you have they have it too, and whatever weakness you have they have the same. This time the win went to Tommy and Nick. They were just a tiny bit better than us, but I’m happy we showed well and had a nice, clean race between the two Corvettes. I gave everything I had, for sure. I didn’t have anything else.”

JORDAN TAYLOR, NO. 3 MOBIL 1/SiriusXM CHEVROLET CORVETTE C8.R – SECOND IN GTLM: “It’s a little disappointing not to get the win. At the same time it was a good day for Corvette Racing with another 1-2 finish. It was nice for the 4 car guys to get the monkey off their backs. We had a good Corvette. From the pole, leading most of the race and with the pit stop cycle and strategy, we just missed it a little bit. In these races, you can’t make any little mistakes. Once the yellow came out at the beginning, it kind of put everyone on a three-stop strategy. There were some options for a three-stop but you needed it to be green the whole race for that to work. Once the yellow came out at the beginning, everyone was locked in to the same strategy. But it wasn’t a bad day for the championship, so we can look forward to Long Beach and focus on that one.”