This coming Saturday, the Corvette Racing Team hits the track once again at the Mobil 1 Twelve Hours of Sebring hoping to clinch the GTLM Manufacturers' Championship and close the IMSA WeatherTech SportsCar Championship season on a high note.

Below is the official press release from the Corvette Racing Team:

DETROIT (Nov. 10, 2020) – Corvette Racing returns to Sebring International Raceway this weekend for the Mobil 1 Twelve Hours of Sebring and the close of the IMSA WeatherTech SportsCar Championship season. It’s the second race at Sebring this year for the newly crowned GT Le Mans (GTLM) championship-winning program.

The 68th running of America’s oldest sports car race will bring the curtain down on the first year of the mid-engine Chevrolet Corvette C8.R. It has been an unqualified success with six race wins and the GTLM Drivers and Team titles… with one more event to go.

Saturday’s 12-hour endurance race also is set to serve as a coronation for Chevrolet, which will win the GTLM Manufacturers Championship as long as one of the two Corvette entries starts Saturday’s race. Already, Antonio Garcia and Jordan Taylor have secured the category’s Drivers Championship in the No. 3 Mobil 1/SiriusXM Chevrolet Corvette C8.R in the series’ most recent round at WeatherTech Raceway Laguna Seca two weekends ago.

The runner-up finish in California for Garcia and Taylor, who drive this weekend with Nicky Catsburg, also netted the No. 3 Corvette squad the GTLM Team title. Since 2001, Corvette Racing has won 13 Team championships and 12 Drivers crowns.

Once the race begins and the Manufacturers title is settled, there are two goals for Corvette Racing: win for the 13th time at Sebring and secure second place in GTLM points for Tommy Milner and Oliver Gavin. The duo, driving the No. 4 Mobil 1/SiriusXM Corvette C8.R with Marcel Fässler, won earlier this year at Sebring in a two-hour, 40-minute sprint race.

The Sebring 12 Hours is steeped in Corvette Racing history. The event has witnessed the team take 11 class victories since 2002, and five of the six drivers have previously won there. Gavin leads with six GT-class victories, Garcia has three and Milner two. Taylor was part of one overall winning effort in the 12 Hours while Fässler has a GTLM win to his credit in a factory Corvette. 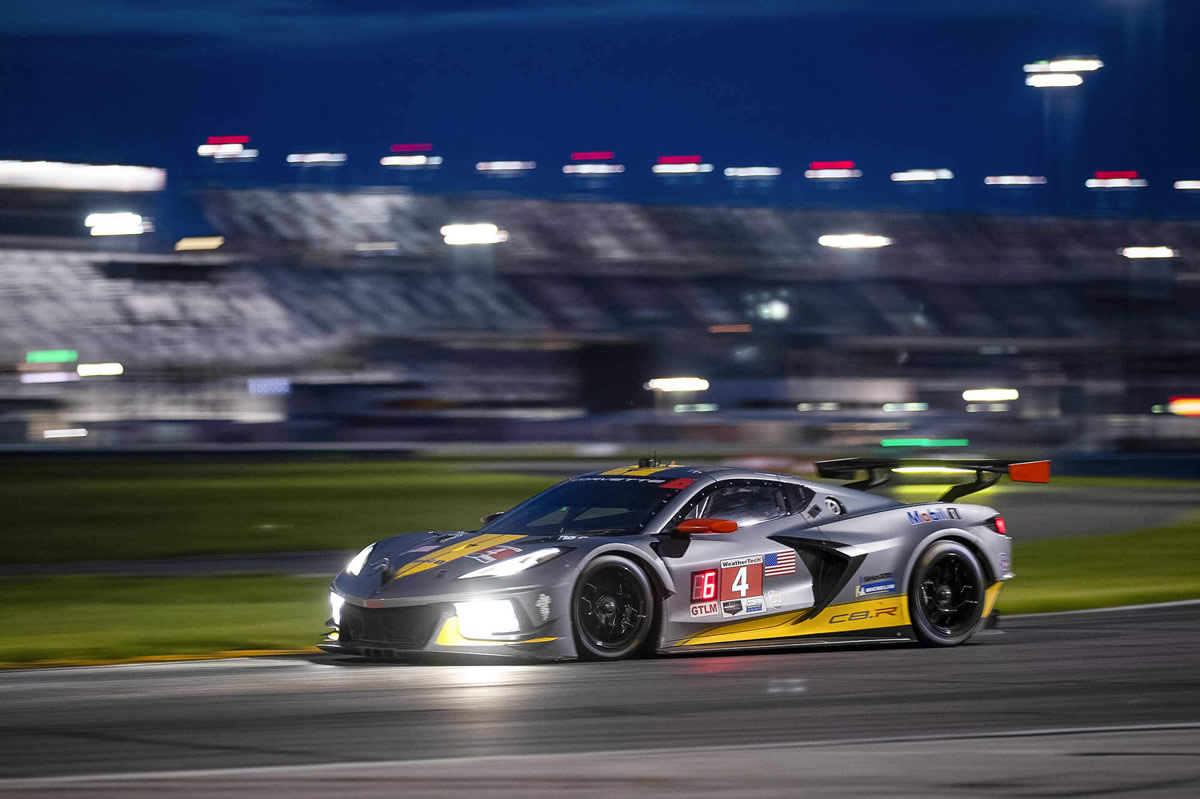 The #4 Mobil 1/SiriusXM Chevrolet Corvette C8.R driven by Oliver Gavin and Tommy Milner races to a fourth place finish in the GTLM class Saturday, October 10, 2020 during the IMSA WeatherTech SportsCar Championship at the Charlotte Motor Speedway Roval in Charlotte, North Carolina. (Photo by Richard Prince for Chevy Racing)[/caption]
Saturday is the second long-distance race in three events for Corvette Racing and the rest of the WeatherTech Championship. Garcia, Taylor and Catsburg finished as GTLM runners-up in the 10-hour Petit Le Mans at Michelin Raceway Road Atlanta. In the No. 4 Corvette, the Gavin/Milner/Fässler trio will look to capture their second Sebring 12 Hours together; they won in class in 2016.

It also would send out Gavin on one of the highest possible notes. He will end his 18-year run as a full-time Corvette Racing driver at Sebring – a place where he has won six times with the program… five in the 12 Hours of Sebring. He is the team’s all-time winner in career starts (202), IMSA championships (five) and wins (51), among other categories.

In addition to the Corvettes on the race track, Chevrolet will have a number of vehicles on display at its midway display from Thursday through Saturday. Chevrolet models at the static display will include the 2020 Corvette Stingray Z51, Camaro ZL1, Blazer Premier, Silverado 1500 Crew High Country, Trailerblazer RS and Tahoe Premier

The Mobil 1 Twelve Hours of Sebring is set for 10:10 a.m. ET on Saturday. NBCSN will air the race live from 10 a.m.-3 p.m., and 6-10:30 p.m. ET; live network coverage on NBC is 3-6 p.m. TrackPass on NBC Sports Gold will offer live streaming of the full race starting at 10:05 a.m. ET. In addition, IMSA Radio will broadcast the race on IMSA.com, which also will host live timing and scoring. The race also will air on XM channel 202 and SiriusXM Online 972.

ANTONIO GARCIA, NO. 3 MOBIL 1/SiriusXM CHEVROLET CORVETTE C8.R: “I don’t think our approach will change at Sebring having already won the championship. At Laguna Seca, I wasn’t really thinking about it. We knew that we just needed to start these last two races. Once we started at Laguna, I wasn’t conserving anything and was going all-out to win the race. I think it will be the same at Sebring. Maybe it will take some of the pressure off the team. But in a way, this brings Sebring a little bit back to normal where it’s the second race of the season and you don’t think about the championship. You take every risk needed. It’s a relief not to have to treat this as the last race of the championship, where you can tend to think too much. But now winning the championship opens things up for us. It becomes a single race that we want to win.”

JORDAN TAYLOR, NO. 3 MOBIL 1/SiriusXM CHEVROLET CORVETTE C8.R: “When at first the revised schedule came out, I think we were all pretty nervous knowing Sebring could be the deciding race in the championship. It’s an incredibly difficult race. Having that wrapped up now makes this almost like the Rolex 24 at the beginning of the year where your only focus isn’t on winning the championship. It’s nice to have that mentality going in. We can go in there focusing on getting the win. We had a good race there in July, so we have some race experience with the C8.R. We can look back to that to rely on some data for building blocks going into this race.”

NICKY CATSBURG, NO. 3 MOBIL 1/SiriusXM CHEVROLET CORVETTE C8.R: “The Sebring 12 Hours is a bit later in the year that we had planned! But it’s a race that is always very special. This is a unique circuit which makes this event difficult to win. I feel we have a very good chance to fight for the win. I can’t wait to get back in the Corvette again. Petit Le Mans was a good race for us, and I really enjoyed it. Now I am a little more into the car than when I arrived at Petit Le Mans; it hasn’t been that long ago. I hope we can finish off this championship season on a high and win this race.”

OLIVER GAVIN, NO. 4 MOBIL 1/SiriusXM CHEVROLET CORVETTE C8.R: “Racing in November at Sebring is going to be a little different. We’ll have some more darkness and it will probably be a little stormy. I still think it will be just as hot at it is in Sebring in March. We did race there in July and have already done that ‘warm-up’ to get us ready for the 12 Hours. Tommy and I came away victorious that day, so we’re looking to repeat that and for me to finish my full-time career at Corvette Racing with one more victory. It would also give me 50 wins in IMSA, which would be a nice little statistic to finish on.”

TOMMY MILNER, NO. 4 MOBIL 1/SiriusXM CHEVROLET CORVETTE C8.R: “Running the 12 Hours of Sebring in November means we definitely will have a lot more darkness than we are used to, which is a challenge in itself. Sebring at night is tricky. The track has helped by putting lights at some of the apex corners but that doesn’t help you navigate some of the other parts of the track. Luckily, headlights were a priority of the C8.R and the team has done a good job of building in that lighting for night-time conditions. Hopefully that will minimize that challenge. The track temperatures also likely will be cooler so that could change some of the tire compound allocation options. We don’t usually make huge setup changes for certain times of day, but I think we obviously will pay more attention to what performance will be like in those conditions as opposed to the daytime hours. We have a good base to work from after our first and second at Sebring in July. We know the car is fast there, plus we have continued to learn throughout the year. We’re looking forward to putting that information on the racetrack and seeing if we have improved the car. I would guess that we have. Ending the season with another win and 1-2 finish would be awesome.”

MARCEL FÄSSLER, NO. 4 MOBIL 1/SiriusXM CHEVROLET CORVETTE C8.R: “I think the biggest change for Sebring is that we will run more at night. For sure, that’s an important thing for the tire choice. Usually Sebring is very crowded, and hopefully we get a lot of people that can come to the race. It would be great for the ambiance. But in the end, this is still a very tough and difficult race physically on us as drivers and on the equipment. Fortunately I was able to get some good time in the C8.R at Road Atlanta for Petit Le Mans, so both Nicky and I should be up to speed. It would be great to end the season with another Corvette Racing win.”