Any help appreciated in identifying a short block that I purchased a few months ago.

I have not been able to identify a 1W suffix. It is clearly a 1 as opposed to an L.

Any help is appreciated. 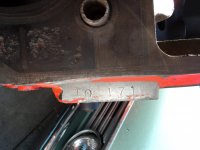 That's not a factory stamp so there's no telling what it might mean. The engine block was cast in Dec. '68. GM did not use code 1W or IW in '69 production as far as I can see.
H

What you have is a bastardized assembly of parts.

A "T" on the stamp pad sometimes meant the engine was made at the Tonawanda NY engine plant and since the engine is a BBC, that makes sense as BBCs were built at Tonawanda.

As for the rest of that odd stamp pad number: being that it's a 2-bolt 427 or 454 block with a 396 crankshaft I'll guess that either: 1)It was a GM replacement 396 short block purchased between late '69 and '71 and was stamped with whatever stamping system GM used for replacement short blocks back then or 2) it was assembled by a remanufacturer or a rebuilder from parts on hand then restamped with some numbering system specific to that vendor.

Or, it may have been put together on a dirt floor in some hillbilly's car port with parts found at a swap meet.
Last edited: Apr 3, 2014
Hib Halverson
A

The casting number and date matches a 427 big block.
1W as a suffix mast be a mistake. but it sure does look like a 1.
is it just the block and crankshaft you have no heads?
S

Thanks for the responses. No heads with the short block I purchased. It did it have domed Arias pistons that I had machined down to run pump fuel. The plan for my 67 Chevelle is to install a Factory Muscle stick from Comp Cams w/ solid lifters, M21 w/ 3.55 posi.

Thanks for the responses. 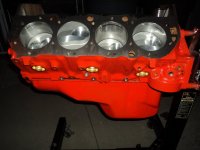 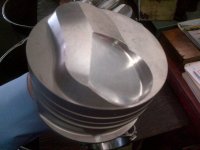 With two bolt mains, you're not going to have the reliability to run a high enough rpm to need a mechanical lifter camshaft.

Your better to run a roller hydraulic lifter cam. The engine will make a lot more power and torque in the RPM band the engine will be safe to run in.
Hib Halverson
You must log in or register to reply here.