for those that don't THINK..

for those guys that don't THINK..they need to spend the cash for a lakewood scatter shield and think its ok to race......look thru these pictures

then think what youll do when your cut clean off at the shins if the clutch/flywheel decides to come apart, I can absolutely garauntee that frame was harder to cut thru than your legs would have been!!

With the amount of torque these cars are capable of generating, I wouldn't run a stick without one. I've used a Lakewood Scattershield and Block Plate on my car for 39 years.

That looks scary! Okay guys - so enlighten me. And remember you're educating a novice here. I need a bit more explanation.

Our cars came from the factory with an aluminum bellhousing. That's the piece that surrounds the clutch/flywheel on a standard shift car, and mates the transmission with the engine.

The advantage of aluminum is light weight. The big DISadvantage is what happens to it when a clutchplate or flywheel lets go and decides to leave the premises.

In our cars, our legs are right beside the bell housing. I removed the aluminum bellhousing and replaced it with a very heavy steel scattershield (probably 7 or 8 times heavier than the aluminum piece). The block plate that I mentioned is only a few millimetres thick and fits behind the engine block before the flywheel/clutch/scattershield are installed. Its function is to save the block if pieces start flying.

The red piece is a scattershield (looking up from under the car - not my car). 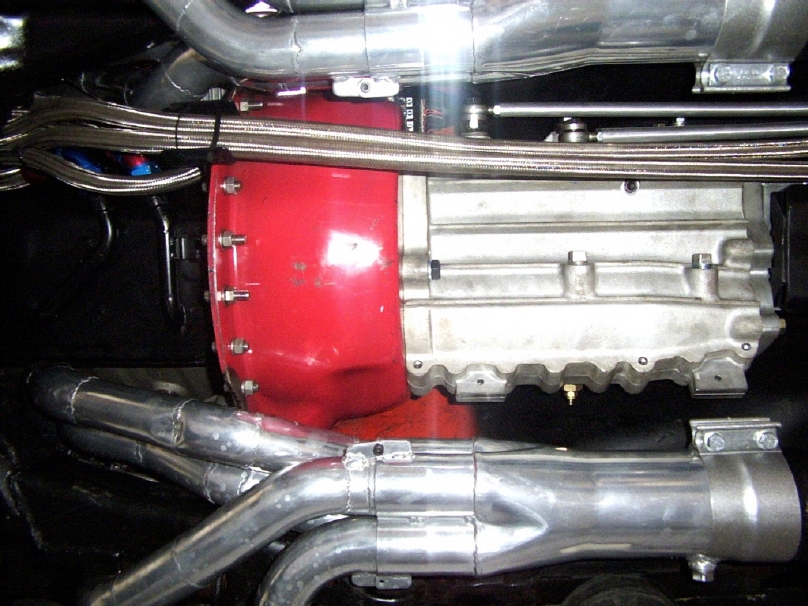 By the way, you may be curious about why the clutch or flywheel would detonate. There are a variety of reasons and/or faults that can cause this, but imagine the forces generated when you're sitting revving to 5 - 6 - or 7,000 rpm and you pop the clutch. The clutch pressure plate slams the disc into the spinning flywheel and exerts mountains of torque down the driveline to the wheels.

Now imagine what happens when you're running large tires (maybe even slicks) that refuse to spin easily. The potential for problems is multiplied. :W

There's a lot going on inside that bellhousing or scattershield......and it's a good idea to keep it all inside.

WHOA! Thanks for the explanation, Bob. I understand more now.

I recall photos of a twisted driveshaft posted at one time. At least I THINK that's what it was. Is that related to this issue or a horse of a different color?

Sorry, Bob. Don't mean to sound completely ignorant but I have limited enough knowledge that it's even hard to form the questions. :L

And sorry too Grumpy for getting off on a tangent - just trying to understand the issues.

XLR8 said:
I recall photos of a twisted driveshaft posted at one time. At least I THINK that's what it was. Is that related to this issue or a horse of a different color?
Click to expand...

So, it that case, the driveshaft twisted, although if memory serves, it was actually one of the half-shafts.

You know what a half-shaft is, right?

Dayum... I was doing so well and then you throw me a curve.
Half-shaft= nope.
For every person with a spark of genius, there are a hundred with ignition trouble.
​

C1 (1953-62) Corvettes are really known as "solid axle" Corvettes. That's because they had a similar setup to typical cars of the day wherein the rear axle was solid from one rear wheel to the other.

In 1963, along came the C2 (midyear) Corvettes with independent rear suspension (no solid axle). Not only did they have a driveshaft between the transmission and the rear differential (that big thingy in the centre of the car between the rear wheels ), but they also received two additional shafts; one between each rear wheel and the differential. These "half-shafts" looked like about half the length of the driveshaft, thus the name. 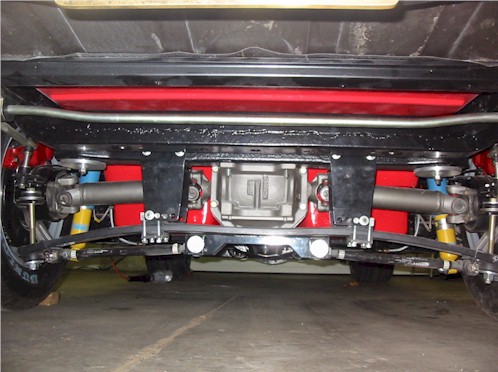 The independent rear suspension comes from the fact that each half-shaft (just like the driveshaft) has a universal joint at each end, allowing either wheel to move in response to road conditions "independently" from the other wheel...........which of course would not be possible with a solid axle.

Now, it's my turn to apologize to grumpyvette for getting way off topic.

Okay... thanks for answering my questions 67... I say questions because I've also wondered about that "solid axle" comment before.

Apologies grumpyvette - we now return you to your regular scheduled thread.

no problem guys were here to talk vettes/engines ETC.

theres DOZENS of differant models , SIZES ETC. but LAKEWOODS about the best known brand and JEGS AND SUMMIT HAVE THEM

"Should I be concerned?"

you tell me!
if theres about one chance in several hundred or even one chance in several thousand that youll loose your legs of feet if the flywheel or clutch explodes (and the more wear and rpms the greater the chances) is spending under $400 worth it to you to make it almost a non-issue (safety wise) if its does ever happen??
lets put it this way, theres several hundered times more likelyhood of that clutch exploding than you ever hitting the lotto but youve bought a lotto ticket right??

or put another way, Ive seen that happen about 6 times in 35 years, chances are not high, but I saw one car almost completly cut in half when it happended.......your choice, but ID sure use a lakewood bellhousing if I had a manual trans and EVER spun the engine over about 5500rpm
ALL my race cars had and have them, its a darn small price to still have feet if it does come appart
" IF YOU CAN,T SMOKE THE TIRES FROM A 60 MPH ROLLING START YOUR ENGINE NEEDS MORE WORK!!"
You must log in or register to reply here.

some speedshops make me crazy

swapping valve springs while the engines in the car