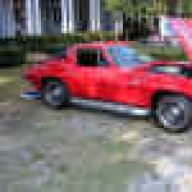 Those on this forum who know me also know that I do not get into the car at all except on very rare occasion. Anyway, I was coming home from a show on Sunday and brought the car up to 3500 rpm in first then second -- everything ok so far -- went into third and engine started missing. Hmmm -- never had this happen before. My first thought was a fouled plug, then maybe wires or dist cap -- same ole same ole. On Monday I pulled the plugs. All 8 were bone dry with no oil fouling or carbon however each plug was kind of encrusted with this reddish/orange/tannish stuff. It was on the side electrode, insulator and the bottom rim of the plug. Well, I got out my spark plug diagnosis color chart and learned that it was residue from MMT which is used as an anti-knock additive instead of lead. I cleaned the plugs, put them back, took the car out for a test and everything was fine. Since I use a 50/50 mix of leaded 112 race gas and 93 pump premium, the deposits could have been coming from one, the other, or both. I called the racing gas company and one of their engineers assured me they do not use MMT and in fact use lead in the racing gas I use. That left the 93 pump gas as the probable culprit. The engineer also told me if the pump gas was oxygenated that could also cause the deposits. I have been using Gulf 93 in the car because of convenience. The plugs were last cleaned and re-gapped last year at the start of spring.

I have seen these deposit before but they dont seam like they are in a spot that would allow the car to break up/ stumble at only 3500 rpms. Did you find if this is actualy the cause? If its the same as I have seen they could just be wiped off by rubbing it on a pair of jeans

Also I know you know your car well ,I just had my 66 out this week end and its shocking how this motor comes alive above 4500 rpms its like a kitten down low and a BEAST above 4500 rpms. I am always impressed with this motor on a spirited drive

http://www.corvetteforum.net/classics/jl66redcpe/
You must log in or register to reply here.