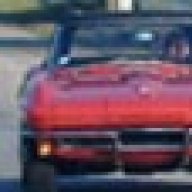 My C2 is a 1965 327/350 4-speed. At first, every once in a while when turning the ignition key to start, nothing happened. However the next turn always started the engine. Eventually the engine would not start after many attempts. I had the starter rebuilt, but the same problem continued sporatically. I replaced the battery cables and both ground cables. I thought I had it licked, starting successfully many times until yesterday. After about an hour of driving, we stopped for a snack and the car would not start. I had to get several guys to give me a push while I popped the clutch. Normally the car starts on the first turn every time. When I returned home, the car started 5 times in a row. ???
Any suggestions would be greatly appreciated.

PROBLEM SOLVED -
Many thanks to all of you who sent suggestions for solving my problem. I checked out every one.
It seems that starter heat soak was the culprit even with a newly rebuilt heavy duty starter.
I installed a permanent magnet gear reduction starter, also known as a high torque mini starter and all seems to be fine.
Best wishes for a great weekend and remember those who paid the ultimate price to keep us safe!
J

I assume when you mean would not start it turned over but you got no ignition. I'll weigh in anyway. I had a '66 with both not turning over and turning over but no start. Mine was a 327/350. The turnover but not start was the starter. I replaced it many times and that would last a month or two. The solution was having it rebuilt as a heavy duty and never had a problem the last 10 years I owned it. With 11.25:1 compression a standard small block chevy starter just doesn't cut it when it is hot. The second problem was it would not turn over at all. I still had the original wiring harness and the connection was at the fire wall where the wiring connector was. This one was the worst because it would randomly show up. Good Luck!

Mine is a 327/350 as well. It seems that your second senario is similar to my problem. When I turn the key... nothing, no click, silence. Thanks for your advice.
J

The way I found it was when it was running I shook the wiring at the fire wall engine side and it would shut down.
J

1965RRR said:
Mine is a 327/350 as well. It seems that your second senario is similar to my problem. When I turn the key... nothing, no click, silence. Thanks for your advice.
Click to expand...

How about a bad ignition switch as a possible hit or miss culpret?

Maybe sometime when it doesn't start try hooking a remote starter switch to it and see if it starts.

Thanks for your suggestions. I had the starter rebuilt by an experienced friend in the business, but not solely a Corvette guy. He recommended replacing the ground wires, which I did and the no start situations greatly decreased. Maybe the solenoid plunger is not the correct one for the high compression 327/350.

A couple of possibilities: corroded plunger on starter solenoid making connection intermittent when starting; bad commutator segment on one of the starter coils.

Thanks. I did have the starter and solenoid rebuilt.
J

Hi
I have had the same problem with two cars in my days , one a Nissan Nivara 2.5 lt the other 350 chev ute cant get any different that that.
Problem is voltage drop to the solenoid very tempremental on starting.
Solution wire that goes to the solenoid is to be unpluged and use it on a 30 amp relay as a swich wire.
Get another wire connect it to the positive that comes off the back of the starter and feed it to the relay as a feed for the solenoid.
What this will do is give you full voltage to the solenoid bi passing the electrical loom.
Works very well and never had a miss start eversince 6 years of it.

Good luck Jose from down under

Thanks, Jose.
G'day.
You must log in or register to reply here.