Rare Callaway Corvette for sale in Aussie auction
One of the last official Callaway-tuned Corvettes to be listed as an official GM product is up for sale, of all places, at an auction in Australia. The twin-turbo Chevrolet Corvette is car number 14 in the RPO B2K series, which saw only 62 GM Callaways roll off the line back in 1991.

Decked in an intense Competition Pearl Yellow paint job, this particular 'Vette has a unique history as it was the 1991 show car at the Los Angeles Auto Show and consequently was packed with every option available on the extensive Callaway order list. Under the hood is a 5.7L Chevy V8 with a pair of Rotomaster turbochargers bolted on that delivers up to 450hp and an earth-moving 575lb-ft of torque – enough to reach the claimed top speed of 190mph.

The car, which is now up for sale by Shannons auctions, has spent its days in the living room of one car nut, who purpose built the house around it. Anyone Downunder interested in purchasing it will need to front up at least $155,000, which is just the starting price the obsessed owner is looking for.

"Let your plans be dark and impenetrable as night, and when you move, fall like a thunderbolt." - Sun Tzu
C

Good luck with that!
K

P.S. This is the full description per Shannon's website:

Three hundred kilometres an hour is a rarefied territory capable of being visited by only a handful of ultra high performance cars in Australia and usually at a purchase price of between $1,000-$2,000 per km/h.


It's not surprising then that one of the world's most desirable and collectable Corvettes - a rare and very rapid twin turbo GM Callaway - is currently drawing performance car enthusiasts to Shannons Melbourne showroom, where similar performance is being offered at a fraction of that price.


This stunning RPO B2K model, with its eye-watering Competition Pearl Yellow paintwork, was No 14 of only 62 GM Callaways produced in 1991 - the last year in which the Callaway model was listed as an official General Motors USA option.


It was the Los Angeles Motor Show car that year and hence was built with all the wanted options on the extensive Callaway order list, including its distinctive and very functional Aero body.


The heart of the Callaway is its 5.7 litre (350CID) V8 engine, which with the assistance of two intercooled Rotomaster turbochargers pumps out a mind-moving 300Nm of power and 780Nm of torque - enough to thrust it to a claimed top speed of around 308km/h,


Metering this prodigious power to the ground is a six-speed manual transmission and massive 275/40 Goodyear tyres on 17x 9.5-inch Dymag wheels, while electronically adjustable suspension takes care of ride and handling.


Since arriving in Australia, the Callaway has been a serial award winner at Chevrolet and open shows around the country and has spent most of its time in between them resting in the lounge room of its owners' house, which was purpose built around it. It is believed to be the only example of these highly desirable 1991 Callaways in Australia.


The car is for sale through Shannons on 'Park & Sell ' listing and is currently on display at Shannons, 321 Warrigal Road, Cheltenham. Its owner is looking at a price of around $170,000-$180,000 for someone to become the new custodian of what is arguably Australia's most desirable 'Vette.

I have heard that everything costs a bit more, "down under"


Also, you may remember the car from here:

I did not mean that in a negative way...I do wish them success, need to choose my words better..
P

I really, really like the look of that car. I think if i bought a C4 id look into getting a body kit like that if at all possible! 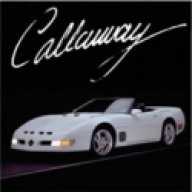 I am aware of Jim's car as he is a member of the same Corvette club as myself. I suspect the asking price will be easily reached. Muscle car prices have gone through the roof here in Australia. There is currently a 1971 Ford Falcon GT HO Phase 111 for sale for $1 million ($860,000 USD). These cars cost $5000. new. The reason they are so valuable is that only 300 were ever made for racing and were capable of 155mph. Very quick for a 4 door car based on a family model. Recent sales of the same model in lesser condition have been in excess of $605000. and 2 others are currently for sale for $750000.
A lot of people are buying these cars purely for investment and they are being locked away from the public gaze. They have become too valuable to take historic racing.
We would pay about $15k for a early c4 and then a further $10k for a right hand conversion.
We see a lot of high performance Japanese cars at realistic prices but they lack the charm of a Chevy V8
You must log in or register to reply here.