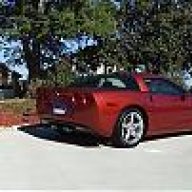 They caught up with me. My roof doesn't exhibit any symptoms yet, but I received the recall postcard and I know it's overdue time to have this checked.

Anyone in the Atlanta area have a positive experience with a repair?

The dealer closest to me isn't exactly Vette oriented...hnoes

There's a lot of pickup truck experience, I'm sure, but I haven't seen a Vette on their lot in a LONG time.

Well, I know this dealer gets bashed around a lot by the various forums but I have had nothing but good service from Maxie Price. They really speacialize in Corvettes unlike a lot of the Chev dealers down here.
I got the postcard last week and like you have had no issues with it but better Getter Done!

I chose to go to a dealer about 40 minutes away, not as far as your suggestion, but they always have LOTS of Vettes on the lot. According to the service department, they're the '2nd Largest' Vette dealer in GA.

They were VERY knowledgeable and courteous about my questions regarding the recall. The service guy informed me that they go directly to a new roof, and don't even try the foam because of possible failure and liability, and directed me to the body shop.

The body shop kept my roof that day and said they'd talk to GM first, since my roof wasn't showing any problems. They called back that afternoon and said GM was authorizing a new roof, anyway. I was told to expect the new roof, painted and complete, within a week.

They called me three days early, to say that the new roof was ready for pickup. Very nicely, they asked if I could come up to get it 'when I had some time to spend' (bring a book to read), as they were concerned that the color (DSOM) did not match the old top well and they would wait to see before assembling the new one. We had already discussed that my original roof wasn't an excellent match to the rest of the car, so I wasn't disturbed to hear that the new paint came out a bit lighter.

:ugh Oops. Is there such a color at Atomic Sunset??? :L If so, that was the color of the new roof. The body shop painter is having a headache...he said that of all the tops they've done, he's only had one that needed to be repainted, and it was also DSOM.

So, this Tues I drop off the Vette so that they can do a custom match on the new roof. BTW, they didn't even suggest 'blending in', as I've heard reported by some other owners. I stated that the car wasn't to be painted anywhere, in any way, and they actually seemed shocked at the thought. hnoesThis is a good thing.

It's a PITA to bring the Vette up there again, and none of us ever want to leave 'em, if we don't have to, but these people appear to be trying as hard as they can to do this right. I'll let you know how they do on Round 2!
Old Flames...'63 Vert, '69 Coupe
You must log in or register to reply here.