I bought my 1987 Coupe about 3 months ago with 80K on the odometer. It's the car that I dreamed about for years. I've been driving it every chance that I get.
When I bought the car, the trim on the driver's side was loose. The former owner had ordered a trim piece but had not installed it. About a week ago, I drove the car to work and it sat in the sun during the day. When I got in the car, I noticed silicone dripping down the door, (where he had glued the trim and tried to repair where he had broken the top of the door interior).
This weekend, I took the door off, replaced the trim and repaired the broken plastic.
Up to this time, the car started everytime I turned the key.
Since I repaired the door, sometimes it will start, other times it just sits there. When it won't start; I turn the key - the dash lights; radio, blower, etc all work, but the starter does not turn, not even a click. The battery is fully charged. The strange part is that I can leave the car and come back in 5 to 10 minutes and it starts right up.
I've heard stories about the security system not allowing the car to start. Can you'all help?
Thanks
John
S

so much safty stuff on it, and stuff like that

Welcome to the forum John. There's a few of us that live in the Houston area, too.

It's been awhile since I've had to battle with the VATS system. I can't remember if it shuts down the electronics completely, including dash lights, etc. I do remember however, that it took longer than 5-10 minutes for the system to reset itself. I'd be out 30min. to an hour. Hopefully, someone will come along who knows the system more intimately.

I have no more to offer on this subject that hasn't already been covered many times, except to say "Welcome to the wonderful world of the intermittent no-start!" :eyerole

I'm sorry to hear that I'm not alone. I did a search on previous "intermittent no-start" discussions.

Guess I'll start working down the list of possible problems.

I wonder if I did something when I removed the door trim. Is there a sensor that I may have moved or something?

Find my posts on VATS

Read those and we will chat!

On the Key is a pellet.

The Pellet is a presision resistor.

There are 2 fingers in the key switch housing which contact the pellet.

87 I believe was the first year of VATS

IF the resistor( key ) doesnt match the on board value in the VATS box, it interrupts the starter circut via a relay ( hidden behind the panel where the "Check Engine" light lives.

Refered to as the DIC panel
Drivers Information Console.


87 had a different style key pellet than later years, the NEW key pellet had a larger contact area.

If the Key misreads... the VATS will reset in 5 minutes IF no attempts to start or KEY in have occoured during that time.

Make sure the pellet is clean ( Shiny metal )

and you do not have a BILLION KEYS ON THE RING for weight.

The other problem is the fingers get dirty and or loose spring tension.

The BAD problem is when one of the TINY wires off the switch assy either,

A) Break off
B) Insulation chaffes and one side of the circut is pulled to ground.

This pair of wires runs down the steerring column and surfaces under the dash ( You have to remove the HUSH panel to get at it.

Your car is fairly low miles. You might check your chevy dealer and see if it has a service replacement key switch assy. VATS has had a lot of problems with the contacts in the switch, so much so they revised the key switch and pretty well fixed the problem. If it has the orginal key switch it's only a matter of time.
My car still has one of the orginal 87 keys and it works fine. If you have the car worked on it will change the key shape but not the value of the key resistor. I know this because I had an orginal key re-cut and it is still my back-up key. There was meat where it could be cut down and work in the lock. Oh, the resistor pellets are known to fall out of the older style keys. You can get a key almost anywhere now, don't think you have to go to GM to get it.
That's the drill if the problem is VATS! 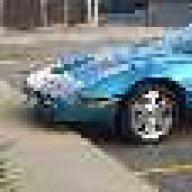 I think the VATS receives signals from the door mechanisim and key lock mechanisim so it knows if someone tries to tamper with the car (like using a locksmith cheater bar). When you had the door apart, it is possible that you disturbed some of the wiring harness and connections to these devices. I would check this out. The GM shop manual has wiring diagrams of the system and the inputs. I have an 89 so the wiring is slightly different but the theory may fit.

Welcome to the site!

Thanks everyone for the good advice.

I took the cheapest route first and got a new key set. It seems to be starting OK, so I'm crossing my fingers and hoping that's the solution to my problem.

Just in case, I will get the wiring diagram to the door and check that out as well. I do think that I might have bumped or jarred something when I took the door interior off.

By the way, I was wondering, is it worthwhile to install the VATS bypass module that is advertised by MidAmerica and Corvette Central?

As a locksmith I deal with these things all the time. Contrary to popular myth there are no VATS sensors in the doors . There are wires that interact with the alarm, but that isn't the VATS (Vehicle Anti-Theft System). The VATS consists of the pellet in the key (one of 15 different resistences), the VATS ignition which has two contacts just inside the "ears" that read the pellet and two thin wires which connect the lock to the module (located where Vigman said it was--under/behind the dash). The module is what actually reads the resistance value and either enables or disables your fuel pump, injectors, ect. (on some vehicles there is a starter interrupt). It is easy (with the proper diagnosis tools) to find out if your VATS is working. Call around to a few good locksmiths in your area. It shouldn't cost more than a few dollars if they are properly equipped. If you lived closer I would have you come by my shop and I would do it for free.

A few more VATS facts:
The system first appeared on Vettes in 1986, and on some early Caddys in 1983.
The #1 value is almost never used since the value is so low that plain keyblanks would sometimes work.
The timeout on the system is 3 minutes if the wrong value is attempted.
The single sided VATS keys were used exclusively until 1997 when the double sided VATS debuted.
The VATS system is slowly being replaced by transponder keys (a small inductor is now in the keyhead on some GM cars)
Resistors are the most stable electronic component currently in use today.
(and an interesting key fact, for me anyway: GM used the same set of codes for 99% of its cars from 1936 to the present. Only in the last 5 years have they started using a different set of codes for the new double sided keys. They used the same codes, but every year they would change the keyblanks--5 different sets--then they would start all over again)

If you have any VATS question, or key questions don't be afraid to ask. If I don't know the answer I can sure find it.

Thanks, you've really helped me a lot. Do you have any experience with the VATS bypass module?
D

On my 84 there is also a starter interupt hooked up to the door locks that is part of the alarm system.

I haven't had any direct experience with the bypass kit, but I don't see why it wouldn't work. You are basically inserting the appropriate resistor in place of the keyblank, and using a "normal" keyblank to start the car. You would compromise your security, but you could do it. If someone decides to bust your ignition and steal your car, it's theirs. If you keep the vats in place they will do damage, but they won't get the car.
--Drew

All the Bypass does

Is replace the resistor on the key... I wouldn't replace it UNLESS the key fingers OR the Key switch fails.

AND The door has NOTHING to do with the VATS!

I don't know how much those bypass kits are but VATS ignitions don't cost that much. If the contacts or lock fail I would just replace it. Let me know if you need a VATS lock & key and I will get it for you at cost, plus shipping.
--Drew

Thanks for the tip. Since I got the new key set, its been starting OK. Wish me luck, I'm hoping that was the solution to my problem.

Well, the new key set worked for about a month. Today, the VATS kept the car from starting, with the new keys, about every other time (out of 6 tries it started right away twice).

Luckly I had you'alls' advice and that of past posts that I found on the VATS problems.

Today, I waited for 4-6 minutes for the VATS to reset and tried to start the car again. Amazingly it started right up everytime that I waited.

Guess I'm officially a member of the "Wait for the VATS" club.

Hey, without your advice, I'm sure I would have called a wrecker.

I'm sure glad that I found CAC.

:cool
You must log in or register to reply here.