Rookie here (1973) - I think I went to quickly from first into reverse and initially the car didn't move anywhere. After a few attempts, it did move, but forward which at least allowed me to get into the garage. I did some research and it looks like I just need to remove the shifter rod from the linkage for 1-2 and manually move it to neutral. If I move the shifter now, I can move reverse in and out but not move over to neutral or any other gear.

My question is, does that sound correct? If so, do I need to jack up the rear or can I just remove the cotter pin and put into neutral?

Here is a pic, it's a little hard to tell but the 1-2 is not quite vertical, it's a bit forward. 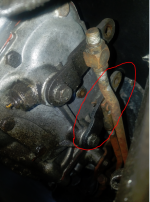 It looks like you need to get the shift levers lined up again. It may have been out of alignment or really needing lubed and that is what caused them to jam together and not allow 1-2 to return to neutral. Removing the shift rods and getting all three levers aligned on the shifter in neutral and then putting all three trans levers in neutral is necessary. Then adjust each swivel on the rod until it slip fites directly into the trans shift lever. With your neutral gate aligned all the way across and the swivels slip fitting into the trans levers you should be good to go. This is assuming there is no serious wear of the shifter. A good lubtrcation of the shifter arms may do wonders for your car also.

Your shift lever should move side to side in the neutral gate through R, 1-2 and 3-4 without having to move it fore or aft to catch the next gate. Rear or front wheels don't need to be off the ground except to allow you access under the car to work.

First you need a 73 Service Manual and then you may need to make a "locating gauge" to lock the shifter in neutral. The instructions on how to make the locating gauge are usually in the FSM.

You insert the gauge into the bottom of the shifter, manually put each of the three levers in neutral, then adjust all the rods such that their ends fit into the shift levers on the sidecover.

Remove the locating gauge and the shifter should be properly adjusted.
Hib Halverson
C

Thank you for the responses - I had to jack up the back end to get under it and before I started disconnecting anything, I figured I would try manually moving the linkage into neutral. Luckily they moved easily and then I tried shifting and it was freed up. I lubed up the shifter the best I could and it seems to be working fine now. The shifter seems pretty loose so I'm going to have to fix that pretty soon.

Thanks again for the advice
-Mike

CC has a linkage parts kit that takes care of most items that wear.

They also sell a new complete shifter assembly if the main shifter unit is worn excessively. The price is really decent compared to trying to rebuild one and expecting like new operation. They also sell a Hurst shifter kit that uses an original looking lever. These are great but costly.

Also notice that the adjustment/alignment gauge is only $2.95 here.

B
Help! Hard shift 5-6 and reverse