I've got an 04 with 33,500 miles. With the exception of the following, everything is fine and I love the car. What I need to know is whether or not this is inherant in this car.

When I start the car and begin to back out of my parking space, the rear end seems to make a noise like a bunch of stuff is loose. Hard to explain. And, it seems to only do it when I back out and turn the wheel to the left. I did it the other day, and turned the wheel to the right, and it didn't seem to do it.

This usually occurs only after the car has sat for the day while I'm working. If I stop at the market on the way home, it doesn't seem to do it when I back out of the parking space.

Hopefully you will tell me that it's the positraction or something normal.

Any advice is appreciated. Alan

HI there,
Most likely, yes, its your traction clutches creating the noise, when the lubricant sits.
Once driven, the lubricant and modifier is distributed through out the diff again.
Unless the noise is all the time, I wouldnt be too concerned.
Allthebest, c4c5

Location
In The Cornfield

Perhaps a change of diff oil is in order?

I changed mine out in my Z at 40k - although I was not hearing chatter.

It was pretty noticeable in my formula Firebirds - you knew when the diff was chattering.... 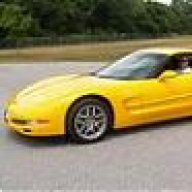 I'd recommend you change your differential fluid and replace it with Royal Purple Max-Gear 75w90. Max-Gear has the right amount of additive already mixed in so you don't have to.

First off I'll temper my response with saying I have no experience with C5's. Now that being said, I will offer this. Way back when (30 years ago), I had a 64 coupe that developed the same issue, I whenced every time I would turn certain ways. I was sure that the rear end was going out. I was told then that I needed "GM Positraction Additive". After I put that in, end of story. C4C5specialist is probably 100% correct in his answer to you, but you might try to additive. BobbyG is also correct, changing out the lube with the Royal Purple should do the trick as well.
2007 Atomic Orange Coupe Cashmere/black interior

HI there,
NEVER EVER assume the correct amount of additive is in the off the shelf differential fluids.
I have seen massive clutch failures do to this assumption.
This an extreme case, but it has happened.
The lubricant from the factory is a full synthetic, first off.
Second, the additive/modifier is only about $10.
Is it really worth the chance to take it?????
allthebest, :bang
GM World Class Certified Technician.
Like us: www.facebook.com/corvettemechanic
http://twitter.com/GMvettemechanic
http://thecorvettemechanic.com
Podcast: Itunes, search 'the corvette mechanic'
H

I agree with C4/C5 Specialist.

While there are refiners who blend friction modifier in their rear axle lubricants, by I'd not assume that all rear axle lube is like that nor would I assume that, if it is blended, that its done so in the correct proportion

Remember, friction modifiers, decrease/eliminate chatter or clutch "squeal" by modifying (degrading) the friction with which the limited slip works. You want as much limited slip action as possible, but you don't want chatter so, you want to add only enough friction modifier to reach a "point" just below the threshold of chatter. In rear axle lubes containing pre-mixed friction modifier, the percentage of modifier is set with some sort of "lowest common denominator" formula resulting in a proportion which may or may not be ideal for your Corvette's rear axle.

The above is typical of Royal Purple's disingenuous marketing. No lubricant (except those refined from liquid unobtanium) can "virtually eliminate" gear and bearing wear. Yes...some premium synthetic rear axle lubricants can reduce wear in some situations, but no lube can stop wear.

Also, many refiners, appearently Royal Purple included, market so called "multipurpose" gear lubes which meet both the API GL4 and GL5 specifications. By definition a GL5 is a rear axle lubricant intended for use with hypoid ring and pinion gear sets. When the gear set rotates, hypoid gear teeth slide across each other. This requires some pretty robust, high-pressure lubricant additives. Unfortunately, these same high-pressure lubricants degrade the synchronizer action in manual transmissions of the type used in a C5.

Do not use a GL5 or a "multipurpose" GL4/GL5 lube in a transmission with cone-type synchros. Use only GL4 lubricants which do not contain high-pressure additives and will preserve proper synchro action.

Bottom line: if your foolish enough to believe that Royal Purple "Max Gear" will truly eliminate wear, well...use it in your rear axle, but, for sure, don't put it in your T56.
Hib Halverson
D

Hi C4C5, did'nt you tell me to use the Red Line d4 Atf for my 6 speed frc? Is that what there are talking about using Royal Purple. or is there a rear diff seperate that needs to be changed sometime sorry for my inexperience... Thanks Dr C5 Corvette

Dr C5 Corvette said:
Hi C4C5, did'nt you tell me to use the Red Line d4 Atf for my 6 speed frc? Is that what there are talking about using Royal Purple. or is there a rear diff seperate that needs to be changed sometime sorry for my inexperience... Thanks Dr C5 Corvette
Click to expand...

Howard
​
Pseudomind is a member of the Jacksonville Corvette Club

HI there,
Redline D4 ATF is for use in the manual transmission ONLY>
The differential requires the part numbers in your owners manual, frictional modifier and lubricant.
The lubricant is a synthetic and is perfect for your differential.
Allthebest, :bang
GM World Class Certified Technician.
Like us: www.facebook.com/corvettemechanic
http://twitter.com/GMvettemechanic
http://thecorvettemechanic.com
Podcast: Itunes, search 'the corvette mechanic'
D

Hi c4c5 Is there a cd or site I can go to to see where the fill and drain plug is for the diff and the trans so i know what to show the mechanic to change it ? also can I get the lube and modifier from the chevy dealership? thanks Dr C5 Corvette

HI there,
If you have to show them what to change, find another specialist, seriously.
Second, if you would like to do it yourself, the diagrams are below for the drain and the fill plug.
Allthebest:bang
GM World Class Certified Technician.
Like us: www.facebook.com/corvettemechanic
http://twitter.com/GMvettemechanic
http://thecorvettemechanic.com
Podcast: Itunes, search 'the corvette mechanic'
D