designeraccd said:
I sure hope GM did improve the software and hardware for the manual shifted 6 speed automatic. I drove an '07 with that yesterday and to say the least was totally unimpressed, given the pausing between hitting the paddles and the car responding. Not exactly what I would want on some of my favorite twisty mountain roads down in se KY!

Maybe the GM engineers should try the new MX-5 (Miata) and its 6 speed auto with manual shift: fast, precise and totally responsive to input at any revs. DFO

Edmunds has a small report based on a test drive and the author could not detect any improvement in the auto shifting.

ingram4868 said:
Edmunds has a small report based on a test drive and the author could not detect any improvement in the auto shifting.
Click to expand...


According to the GM guys at the Bash, huge improvements in the '08s. 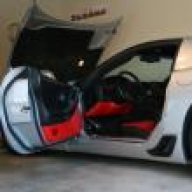 Chevy’s mad scientists have been hard at work tweaking the C6 Corvette for its fourth model year, and the results are finally in. The most important figures: 6.2 liters of displacement, 430 hp, and 424 lb-ft of torque from its V-8 engine, which now carries the LS3 moniker. (For those without Corvette statistics tattooed to their brains, the C6’s previous LS2 V-8 displaced 6.0 liters and pumped out 400 ponies and 400 lb-ft of twist.)

Besides the bump in displacement—achieved through increasing the bore from 101.62mm to 103.25mm—the aluminum-block LS3 gets better-flowing, LS7-style heads; new cam and camshaft timing; and an easier-breathing intake. Updates to the valvetrain (bigger cylinders mean bigger valves), fuel injectors swiped directly from the 505-hp LS7 V-8, and revisions to the block for more strength round out the changes between the Vette’s shapely front fenders.

The LS3’s power and torque curves faithfully mirror those of the LS2, so power delivery is not much different, just more urgent. This is an engine that feels every bit like it has more torque at idle than many motors manage at their peaks. Chevy is predicting a drop from 12.6 seconds in the quarter-mile to 12.4, and we see no reason to disagree. 0-60 times should likewise drop from the LS2’s, but only a tenth or so. The best we’ve managed in a base C6 was 4.1 seconds. Could the LS3 propel the Vette into the threes? You’re dog gone right it’s a beautiful day, Bono.
Like before, you’ll get the same power figures from both coupe and convertible, but an extra 6 hp and 4 lb-ft can now be ordered up right from the factory in the form of the new, optional dual-mode exhaust. It’s a smaller-diameter version of the system bolted to the beastly Z06; where the hair-on-your-chest Vette is endowed with three-inch pipes, the “regular” models will make do with 2.5-inch-wide openings.


It works like this: Vacuum-controlled valves in the mufflers stay shut at lower rpm, limiting noise. Drop the hammer and they flip open, the resulting sonic mayhem scaring the crap out of small children—kids are sissies, after all—knocking birds from trees, and cracking the earth’s crust. (In what is undoubtedly one of mankind’s greatest achievements—ever—some owners have jerry-rigged switches to their Z06 to leave the valves open all the time.)

We’ve always liked the smooth, tympanic sound of the C6, so we were surprised when Chevrolet told us the exhaust tweaks were in direct response to customer requests. Of course, if you can pair a subdued cruising murmur with a trumpeting wide-open throttle roar, you might as well. And roar she does, a harsh, animal yowl at full throttle very different than the guttural hum of the 2007. Chalk us up as converts.

The rest of the ’08 mechanical updates are intended to make the Corvette better to drive. The standard six-speed manual has been fiddled with to deliver “more positive and direct feel,” according to Chevy. On our short drive, we only drove the six-speed automatic, which speeds up gear swaps through a host of software and hardware improvements. Even so, the Corvette’s tranny still lags behind the top sporting automatics out there.

Tolerances in the steering linkage have been tightened up to provide better feel, too. The new car is slightly more direct, but the improvement is very subtle, and really only noticeable in back-to-back driving with an ’07 car.

There are also some interior trim changes, and—aw, screw it. Who are we kidding? Forget some namby-pamby “Linen”-colored leather and frou-frou jetstream blue paint; the power’s where it’s at, baby, and the 2008 Vette’s got plenty. Who’s up for a burnout? (And maybe scaring the bejeezus out of a neighborhood kid or two?)

I saw the new colors at the c5-c6bash in april,I wish that I could say that
I liked them but,not realy I'm going to miss lemans blue,thats on my05.I
realy think G.M made a big mistake by droping that color. If they can have
two reds why not two blues.
Linda Lake

Finally, some performance numbers for the auto.
Click to expand...

Maybe I missed it,but when does production begin?
Jay

Corvette
None yet, but have the itch really bad.

From the Corvette Museum Newsletter