Just got my 82 back on the road. I had a surging problem and found a stuck IAC. Had an extra set so changed it out. Surging stopped and the car started and ran fine except for being very loud. Come to find out my daughter lost a muffler. No big deal since I needed to change the rear pipe anyway. Went looking for the muffler where she thought it came off. This is when I realized the car wasn't shifting right. Seems like when I tried shifting manually (1,2,3,D) nothing happened. Put in neutral and it stayed in drive. Came to a complete stop and it only shifted into 2nd. Pulled back into the driveway and tried backing back out after checking the cables and the car would only go into some forward gear no matter where the shifter was. Checked cables TV and shifter cables they are both intact and moving and I believe they are adjusted right, since it was working fine for the last 25000 miles.

The only change from when I drove it the other day was the lost muffler and the changed IAC. Could my changing the IAC have affected the transmission? If not what could cause nothing but forward gears in every position except PARK? The trans was working fine no slippage or other problems outside of a few minor leaks. 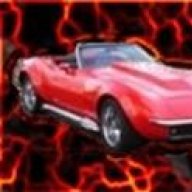 The nut on the trans shift lever might be loose. The lever has a slot the fits over the shift rod and is held on with a nut. The nut get loose, the lever moves out far enough to disengage the tab on the rod, and no more shift. Every thing looks normal but it's not.

The trans is a 700R-4. For it to have park and any forward gear only is going to be tough, The selector valve in the trans also moves with the lever on the outside- PARK also is on that same lever. The way it's built, it would be tough for the link from the rod to the selector valve to come out, but it is possible. Only way to know for sure is drop the trans pan.
Does it feel like it's trying to pull while it's in park? Obviously, it can't move in park, but the engine should be running at normal park or neutral idle speed. Any change in idle speed when you shift from PARK to any other gear? If not, I'd go after the selector valve link. 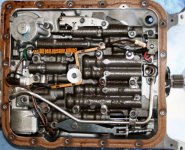 At the bottom of this picture,(pan and filter removed), just below the tube and at the first pan bolt on the lower rail is the "rooster comb" The selector shaft comes in thru the case, thru the comb, and is secured with a nut, then a clip between the comb and the case(the clip is just a spacer). The park link is keyed into the top of the comb (not visible in this picture). When you shift into park , the position it's in now, the comb rotates bottom forward, pushing the park link to the rear and engaging the park pawl.
Hard to see, but just above the comb nearly under the tube is the selector valve link. It's just a rod that hooks into the comb and into the selector valve- you can see that rod disappear into the valve body. That rod has a tab on it that is supposed to keep it from coming out of the comb.
Maybe this will shed some light on what you have going on.
Let us know what you find.

This picture is a 1988 or later trans with an auxiliary valve body for 4th gear. Pre 88's do not have the tube from the front center to the rear or the aux VB. The mechanical shift linkage is identical. The tube and aux VB are operated hydraulically.
If anyone has extra horsepower not doing anything, I can always use more.

Thanks Tim! You're info was great. I had checked for loose, frayed, broken/disconcected external linkage and having found nothing on the outside I started to get ready to drop the pan as you suggested and look for something disconnected. First, I had to make sure that there was no physical damage from the lost pipe and that there was no connection to changing a jammed IAC that I had changed out. Coincidences are great when you're trying to trouble shoot something aren't they?

I didn't have a way to drop the pan without making a big mess and since I was going to get routine service done anyway I decided to let the local tanny shop have a go at it. Not expecting much ( I very rarely let anyone work on any of my cars), I was pleasantly surprized that they didn't tell me I needed a full rebuild. When they called me this morning apparently there is a clip between the external linkage shaft and the valve body linkage that was broken which is right in where you talked about. The trans would go in and out of park but it didn't "feel" right. Turns out the trans was still in gear while it also had the parking paw engaged. The parking paw would disengage when I moved the shifter out of park leaving the trans trying to be in what ever gear it wanted to be in with the forward gears winning out. This is why I couldn't get reverse or neutral no matter where I had the shifter. I origionally thought that it was going in and out of gear, but it was never going out of gear at all. The way it drove felt like it was in 1st and the gov would shove it into 2nd. The valve body was wherever it was when the clip broke. Leaving the valve body disengaged from the shift linkage which left the trans in 1st/D.

GREAT!! Glad you got it up and on the street again.

If anyone has extra horsepower not doing anything, I can always use more.

B
Difficult to Shift from 1st to 2nd Gear - Manual Transmission