i noticed when i sit in the car, and go to put it in gear, the back end kinda drops back. Is this normal?

Must Have an Automatic Transmission

blueslady,
Unless there is a severe "Clunking" noise when you put it in gear, I believe it is pretty normal for an Automatic to "Squat" a little bit in the rear when putting it into gear. You'll probably notice it more on a cool morning while the choke is setting, and you have a faster idle.

My 81 squats down fairly hard when I put it into gear. Does have a klunk that I'm concerned about. Got to check those U-joints. Seems normal to me for an automatic.
Dale

They ALL drop down hard... especially when you stomp the accellerator to the floor
GOD I love that kind of talk............

Enjoy.... you picked a good year and there's ton's of expertise to guide you along the way.

Tanned, rested and
Retired in the Peoples Republic of MD ;help
S

Blues, I think, an 82 squats more then any other year. Mainly, due to the fact that they tend to idle faster then carburetored cars. I have an 82 in the shop, that if it is not warmed up, it will almost give ya whiplash. It's still pretty stout even after it's warm.......Sorry guys.....I like the carburetor on C-3's...........Steve
7

I have to say, that is one of my favorite things about my automatic 'Vette...it reminds me of a tiger crouched and ready to spring forward at your command! I especially like the effect on cold mornings.
* the squat is caused by the transfer of energy from the engine and tranny to the differential, continuing to the half-shafts and wheels held by your brakes, causing the vette to flex upon its springs due to the torque delivered.
People who have seen me put the 78 in gear and witnessed the squat usually raise their eyebrows in interest. It gives the appearance of power waiting to be unleashed. Last year I let a deputy drive my car and when the car squatted for him, his eyes turned into saucers accompanying a huge grin!
He bought a 79 within 3 weeks.
I agree with Bud, any clunking sounds are not good. Listen also for squeaks (u-joints) as you first begin to roll away. If you fix the squeaks before they progress, you shouldn't have to worry about clunks.
Silver

Silver,
That is a GREAT POST Thanks for the additional input and perspective on why automatics do that

Don't forget about those clunks turning corners too. There's nothing worse than loosing
a rear wheel assy when the U-J fails. Trust me... It ain't pretty!

...... Nut
Tanned, rested and
Retired in the Peoples Republic of MD ;help

I must have someting wrong. My 64 doesn't squat at all. When I floor it the front end comes all they up, but only in fourth. All the other gears it just hazes the tires. HEHE
Mike
Stingray6974
69 350 4speed base coupe
74 L-48 coupe numbers matching
64 GS replica
M

Arlene:
My 82 squats also kinda scared me at first,but now it is just plain KEWL :O 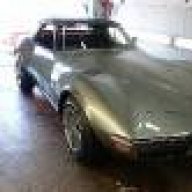 I don't know, mine doesn't really squat much at all. I have the optional FE7 suspension which might explain it especially if you have the glass mono rear leaf spring which might cause more squat on take off.
Jerry
W

On my 81 I found that the front bolt holding the spring to the rear end had fallen out. Check your bolts it has 3.
Good luck,
White81
Z

My '81 used to squat down some until I replaced the rear spring, now it has a nice level stance, until I stomp the gas and dump the clutch!

Inspiring the next generation of Gearheads