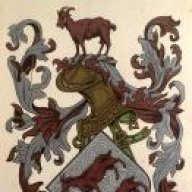 This is more of a "what I found and how did I fix it" type post. I hope you find it informative.

Purchased a 1993 C4 a few months ago for a steal of a price, knowing that there was a lot of issues with it. After driving it for a few months I noticed the battery was quickly going dead if she was parked for a couple of days. I finally found time to debug the problem. I took my trusty multimeter pulled each fuse and measured the current at each individual fuse location (with the car off). This took a lot of time, but paid dividends. Most fuses only pulled 0 to 2 milliamps...until I got to the power seat fuse. It was pulling 500 milliamps (a half of 1 amp!). I decided to disconnect the power seat connector, which is located under the seat cushion (quite easy to take off) and then remeasure the current at the fuse. Luckily I started with the passenger seat. As soon as I unplugged the passenger power seat supply, Bam!, the current went to 0.

Then I saw it....the lumbar pump motor look like it was melting. See the picture below. 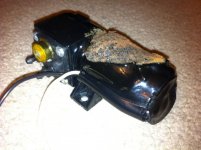 Eureka! That was it, I thought. A bad motor. I got on the phone and called up an on-line used corvette parts dealer and ordered a motor on the spot. Then I drank a celebratory beer and patted my self on the back. I even went in the house and informed the uninterested wife of my keen debugging skills. I think they call this, "Premature Celebration."

The next morning it hit me. Wait a minute.... why would the motor melt when there is a switch in series with the lumbar pump motor power that is spring loaded to always be in the off position? The switch must be bad!

Off to the garage I went, with my trusty multimeter in hand. I lifted the seat cushion and disconnected the lumbar switch connector from the motor. Sure enough...it was a short. I disconnected the switch assembly from the seat (only two screws) and decided to disassemble it to see if I could get to the switch and fix it. Six screws later and it was apart. See the picture below. 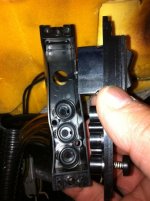 If you ever need to do this, be careful as there are 3 rubber O rings associated with the air bleed buttons that you need to keep track of, as well as 2 screw retainers that fall out when you separate the assembly. Take it apart slowly and try to keep track of everything.

Unfortunately the faulty switch had a enclosed plastic housing that I could not pull apart to see what was wrong. I could peer into the end of the switch and faintly see the mechanism (with the help of a strong magnifying glass), but I could not tell if it was functioning incorrectly. I noticed that the switch incorporated a small capacitor inside as well. As we all do, I began to question my self; I am pretty deep into this project, should I dissect the switch, find the problem and look like a hero to my uninterested wife (but would probably result in a destroyed switch and then a phone call to the parts guy) or should I just call the parts guy now? 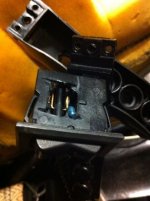 Again fate smiled on me. Capacitors do go bad. So I cut one lead of the capacitor to remove it from the circuit. Bingo! No short. The switch started working like a switch again. 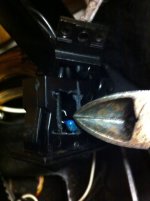 I reassembled the switch assembly and reinstalled it in the seat. The capacitor is an important component in the system and it is there for a reason. So, I ran down to Radio Shack and picked a 0.1uF 50V capacitor and soldered it across the switch wires to simulate the one inside of the switch. See picture below. 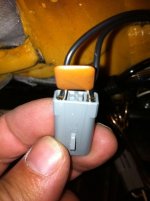 The lumbar motor came in today and it works like a charm. Celebratory beers all around.

Very impressive. Good detective skills. I liked your procession of information and pics!

S
Have you checked your Secondary Air Pump Lately?