breaks lock when 88 get to temp

I'm a wannabe mechanic tryin to solve problem with my 1988.
It seem that when the car gets to temp - above 200 degrees - the 4 disc breaks lock up. If I wait for it to cool down or let it sit a while the pads un-clamp - and its fine untill the engine gets to temp again.
Any ideas would be appreciated.

Um...I don't see why the engine temperature would do anything to the breaks. Do they lock on there own or do they stick after you depress the pedal? Will it do this if you just let it sit and warm up or while driving?

wonder what will happen if you unplug all the electrics to the ABS box ?? It sounds like something in there is telling the brakes to lock. I'd say the temp is just incidental...just a couple of guesses
O

topguesser said:
I'm a wannabe mechanic tryin to solve problem with my 1988.
It seem that when the car gets to temp - above 200 degrees - the 4 disc breaks lock up. If I wait for it to cool down or let it sit a while the pads un-clamp - and its fine untill the engine gets to temp again.
Any ideas would be appreciated.
Click to expand...


You need to tell us more - we can't help you with what you've supplied.

This will seem like a stupid question, but I have to ask. How do you know it's the brakes?

What exactly do you mean by "lock up"? Do you mean if you're driving down the street at 30 mph, the car suddenly and without any action on your part, comes to a complete stop? Or do you mean that you feel the car slow down, and you're attributing that slowdown to the brake system?

I can't imagine that the underhood temperature is so high that you're boiling the brake fluid in the master cylinder. However, have you looked at the fluid, and are you sure that it isn't contaminated with something?

Give us more to go on.

Thanks,
Steven
If energy and enthusiasm were a substitute for experience and expertise, then I would hire my 11 year old for this job.
T

breaks lock up on 88

Thankyou for replying
This am I started the car - cold - and the breaks were fine. I let it run for 15 minutes to around 209 deg and the breaks were locked. This had happened before wen driving and the two fronys were smoking and smelling.
I think it is affecting all four calipers bu I am not positive about the rears.
Can heat affect the funtion of the break cylinders? I also see that the lines run down past the exhaust with only a metal heat sheild separation.
The problem started befor I changed the flexible break line to ss and the fluid to type 5. 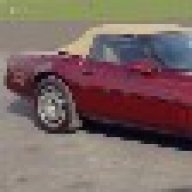 I've been told that's a no-no in these cars.

With the engine cold, jack up the front and see how much effort it takes to spin the front wheels by hand.

The SS flex lines by themselves should not have caused any problems, but it's possible that some dirt may have gotten into the caliper at the fitting during the install.

The temp you see at the time the brakes lock is possibly nothing more than circumstance. The engine may be working harder to move the car if the wheels do not spin freely. Given the 15 minutes or so for the brakes to get hot enough to keep the car from moving, the coolant temp becomes high because of the added strain on the motor. BTW, 209 degrees is not a lot of temp for C4's

Heat radiating from the engine should not affect the hard brake lines. Extreme braking force can heat the brake fluid to where it actually boils but this causes a reduction in breaking performance and the portion of the fluid that boils is in the calipers themselves.

If you did add DOT5 Silicone fluid, you should remove it immediately, The DOT5 fluid does not work with ABS systems. This type of fluid will get air bubbles in it from the operation of the pump and cause cavitation, resulting in loss of braking effort and ABS problems. For street use, use a good quality DOT3 or DOT4 fluid. There is a DOT 5.1 fluid that is a synthetic fluid and will work in ABS systems.
C4cruiser
Corvettes de Olympia
Puget Sound Corvette Club
NCM Member #7353
02 Vortech supercharged EB Coupe
87 Gold Coupe 4+3 Z52
My Past Vettes: 92 Vert, 78 L82 Coupe, 73 L82 Coupe, 70 LS5 Coupe

Location
In The Cornfield

Could a component of your anti-lock brake system be touching an exhaust manifold or other heat source and be experiencing a thermal failure?

I am not versed in C4 at all - just thinking about what could cause the symtoms you describe.

If I understand the symptoms (locks/unlocks with temerature variables), that is what comes to mind.

thank you - I will check for that
T

Top, keep us posted on this.....very curious problem. Don't forget to FLUSH that DOT 5 real good. (not sure what you use, alcohol ?) just know it has to be totally flushed. If it were me, I'd flush, fill with new and then flush again and put in new again to be safe.

Just another thought and question. Did this problem occur before or after you installed the DOT5 fluid??

DOT5 (silicone) fluid is not hydroscopic. It wil not absorb moisture so any water that enters the system will stay in that form. If water makes it's way to the wheel cylinders (like from a rubber seal that is leaking) and boils, the pressure created from the steam may cause the caliper pistons to move, effectively applying the brakes. Water boils at 212 degrees and it doesn't take a lot of braking application to get the calipers to that temp.

At this point, I would do a complete flush of the brake system and install a good DOT3 or 4 fluid. The ABS pump will probably have some of the DOT 5 fluid in it but to flush the pump, you need a way of running the pump to flush the fluid. I recommend you have this done at a reputable shop that has the equipment (GM Tech-1 scan tool) to do this part of the work.
C4cruiser
Corvettes de Olympia
Puget Sound Corvette Club
NCM Member #7353
02 Vortech supercharged EB Coupe
87 Gold Coupe 4+3 Z52
My Past Vettes: 92 Vert, 78 L82 Coupe, 73 L82 Coupe, 70 LS5 Coupe
O

c4cruiser said:
Just another thought and question. Did this problem occur before or after you installed the DOT5 fluid??
Click to expand...


He mentioned that the problem occurred prior to filling the system with DOT 5 fluid.


topquesser said:
The problem started befor I changed the flexible break line to ss and the fluid to type 5.
Click to expand...

Steven
If energy and enthusiasm were a substitute for experience and expertise, then I would hire my 11 year old for this job.
You must log in or register to reply here.