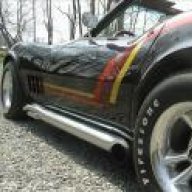 FEULING "CENTERFIRE" HEADS FOR 454/BB CHEVY - complete original kit with Feuling camshaft and all original accessories including new gasket set... This pair of heads are "Serial # 1 & 2", the very first set available to the public, purchased in February, 1998 thru "Klein Research & Development", the only original Feuling authorized dealer. Tom Klein recently sold a set of these heads for $100,000! Jim Feuling & Tom @ Klein were very interested in my particular application and stayed in contact with me throughout the installation and "dialing in" process, since I put them on my new 1997 DONZI 22ZX speedboat... we tried many different prop pitches, both 3 & 4 blade until finding the best performance with a 4 blade Bravo 25 pitch... adding just these heads alone added 9 MPH over stock... it originally ran 58 MPH @ 4,800 RPM, and then 67 MPH @ 4,200 RPM with these heads, and no other changes. We chose the prop to max the RPM @ 4,200 because that is where these heads have their peak horsepower and torque on the dyno reports, so of course these heads never saw use above that except during prop selection we tried a lower pitch at 4,400 RPM but lost 1.5 MPH at top speed but did accelerate quicker... and speaking of that, you can't imagine how much faster my Donzi accelerated with these heads over stock! Unbelievable, I tell you!.. Even other pistonhead boaters couldn't believe how quickly I'd pull away from them. Maybe they'd get me at top end with their twin big blocks, but I'd blow them away anywhere from a standing start, all the way to my top speed, then if they had more left, they'd finally catch and pass me. According to dyno tests reports provided for a stock 454, these heads add 80 HP & 80 ft.lbs. of torque @ 2,250 RPM, and add 100 HP & 100 ft.lbs. of torque @ 2,750 RPM, unheard of from any other head design in existence even today!.. Typically, you'll only see HP & torque gains in the 4,000 to 6,500 RPM range but will remain nearly the same as stock or even lower in the 2,000 to 4,000 RPM range that you'll normally be using on the streets... Imagine having that extra 100 HP/torque in that low usable RPM range. I just spoke with Tom Klein in March, 2011, and he told me that they put a set of these heads on a 572 with Hilborn injection and it made an unheard of 800 ft. lbs. of torque at only 2,000 RPM!!

According to two magazine articles I still have and can provide to anyone interested, six pages in "April, 1997 Popular Hot Rodding", and 4 pages in "February, 1998 Vette" magazines tell all the incredible details of the ground breaking engineering that went into the R & D of these Centerfire heads made of A356 aluminum heat treated to T56... features much smaller than stock intake & exhaust valves that are "curvilinear" rounded seats as opposed to multiple angled seats common to most other designs... 84 cc "figure 8" combustion chambers that raise compression by 2 - a stock 8.5:1 ratio becomes 10.5:1 just by bolting on these heads... the spark plugs install thru the valve cover with the electrode tip being directly in the center top of the combustion chamber centered between the valves... and the valve heads are within a couple degrees of being parallel with the top of the piston, so no relief cuts in the pistons are needed... Feuling's design takes full advantage of extremely fast gas speeds that allow for more complete combustion, and lower temperatures, all with allowing you to burn 87 octane with no pinging, and BEST OF ALL, THESE HEADS ARE 19% MORE FUEL EFFICIENT THAN STOCK in their dyno testing!! Jim Feuling was recognized as one of the leading automotive engineering geniuses... check him out:
East Coast Timing Association, Jim feuling Memorial

These heads have been on my Donzi from the summer of 1998 until now, I decided to move into a larger boat so we put the stock heads back on and the Donzi's now for sale also. The heads while on the Donzi's 454 logged only 56 hours on the hour-meter, and mostly saw a cruising RPM around 3,200 so they're near new, the only cosmetic flaws are some slight pitting on the aluminum valve covers that is common with aging... I'll get some photos of everything ready for anyone interested. My heads will be available near the end of March, 2011. (We're in the process of removing everything from my boat).

By the way, someone on the forum at: "http://www.454ss.com/cgi-bin/forum/YaBB.pl?num=1239328365/0" posted photos of a set of these heads that were for sale a couple years ago. Click on the "NATC" link below to see some pretty good pics of what they look like inside & out.
NATC - Feuling Heads For Sale

I'm really looking for the cash for these babies, but will entertain interesting trade offers...
(PLEASE, don't waste yours or my time with any silly offers... anyone that knows what these are, knows what they're worth). 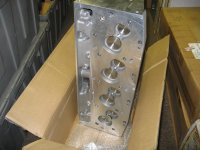 Note that my valve covers are raw aluminum, not like the photo below with the FEULING valve covers painted yellow.

If Jim Fueling's BBC heads are so incredible, why are you selling them?
Hib Halverson

I could make up any story to tell you, but the TRUTH is that I just sold my "Donzi 22ZX" speedboat that had these extremely rare FEULING heads, and I put the stock Mercruiser cast iron heads back on as part of the deal... I wasn't gonna let 'em go!

If you want to learn more about how radically these heads will change the performance of any big block Chevy, give Tom Klein from "Klein Engines" a call at: (877) 995-3963... he was involved in the development of these heads with Jim Feuling, and as I stated "recently sold a set of these heads for $100,000"!.. That's how amazing they are!

Tom just built a 572 with a set of FEULING heads with Hilborn injection and it made 800 ft. lbs. of torque at 2,000 RPM on the dyno!!! NO OTHER HEAD DESIGN EVEN COMES CLOSE to that, just above idle. If you're a pistonhead, you know typically all other head designs sacrifice power and torque at low RPM to make their gains at high RPM. Not FEULING heads, baby... they give you all the gains in the usable RPM range partly due to the fact that these heads use significantly smaller intake and exaust ports along with other radical new features that are unlike any other heads... total "outside of the box" design with many patents associated with it, some of which were stolen by Mercedes and other manufacturers that were sued by Feuling for patent infringement. Three-Valve Technology | Mercedes 500SEC.com
Also, on the dyno these heads are proven 19% more fuel efficient than stock!.. What more could anyone want?

Unfortunately for me, the only other toy I have that's powered by a big block Chevy is my numbers matching '69 Vette with a 427 (shown in the attachment below), and even though I seriously considered putting my FEULING heads on it, I really don't want to destroy the 100% originality of it, even though I'd love to experience the crazy torque it would have!

If your '71 big block isn't numbers matching, these heads on it would give more usable power than any supercharger, turbos or nitrous could ever give it, plus your gas mileage would increase substantially... ask Tom Klein. 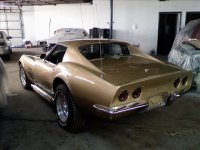 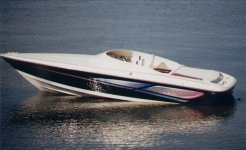 How much are you asking?

I'm taking offers... I'd prefer CASH, but will also consider interesting trades. (just remember what a set of these recently sold for, B4 making any silly offers).

I'm not interested in playing cat and mouse. Name a cash price.

Sorry, no offer has appealed to me yet, but have only been advertised one day...

Maybe "barrett-jackson" would like to get involved in this one!..

OK folks, we've got the first set of FEULING "Centerfire" heads for the 454/big block Chevy that were made available to the public...
and they're up for auction...
:bang

whose gonna start the CASH bidding at more than the $20,000 already turned down by our willing seller?..
:argue

I think at that price you should have a few interested buyers.

EH Mikey, I might let you TOUCH them for that $ amount...
:L

(WOW, that's a heck of a background and list of Vettes you've owned!)
:BOW
H

If Tom Klien recently sold an example of the same product for $100,000 bucks, why are you wasting our time here on CAC?

If he sold one set for 100G, obviously there is a huge market for them somewhere.

C'mon, many Vette guys would love to get their hands on these...

I'm sorry you feel I'm wasting people's time. I figured a pistonhead with a big block C2, C3 or C4 Vette might be interested, plus there sure seems to be alot of interest in this post. Vette guys usually have expendable income, no?..
:duh
H

capVette said:
C'mon, many Vette guys would love to get their hands on these...
(snip).
Click to expand...

As I said before, I feel like your toying with our intellegence, here.

It is true that the Fueling head was a innovative design, however, if "many Vette guys would love to get their hands on these.", don't you think, back when Fueling was making them, a lot of we BBC Vette owners would have bought a set?

If the heads sold for about 3000 back in 1999 and they were not a sales success in the Corvette hobby then, WTF makes you think a Corvetter is going to step up with more than $20,000 for a set of them today?

Certainly that'd be a lot more useful of your time then trying to appeal to we skeptics here on the CAC.
Hib Halverson

I respect your opinion, but...

Someone who saw this post on "CAC" emailed me a $20,000 offer the first day it appeared, so even though many of you may not be interested, there are and will be some who are.
:nono

I couldn't find any info stating that someone paid $100K for a ;pair, only someone was trying to sell them for that amount.

I just Googled "fueling heads" and I found a forum post talking about set for sale for $3500.

In addition, I've found some of the ads you've placed on other sites.

What I couldn't find was any proof that someone paid 100,000 bucks for a single set of heads. Considering the price tag, I figure that would have been a story on some automotive news web site somewhere.
Hib Halverson
You must log in or register to reply here.