Get rid of your resonator!

For real I just gutted mine! I had the Flow Master cat back system and wasn't fully impressed with the exhaust note. Then I had my muffler friend cut the resonator off and WOW! It sounds like a muscle car! Just perfect! Not to loud just really detialed! He just wielded two pipes in place of the resonator and Bam! Like a new system. Sounds great! And I honeslty notice the difference from 1700 rpms to 2800 rpms. The car runs better overall and WOW it has the sweetest note as you climb the rpm range! I have read some other threads were people stubbornly think they have to keep the resonator. Not true! I noticed and increase in power and the sound is like music! Do it! Everyone with a 92-96 Corvette should drop that power and sound robbing resonator! Scott
S

I drove a '92 with modified mufflers and you could hardly
hear music or conversation if you were cruising in 6th gear.
I can't imagine taking a 300 mi trip with that drone.

--I'm thinking of doing an exhaust mod, but I must still be able
to drive on long trips. And I want to keep my hearing!
F

No I don't think it's to loud. It just sounds sweet like a V-8 is supposed to sound! Conversation is fine, and yes I turn up my music and enjoy it! So I don't know why you guys are trippin so hard about resonace. It's a sweet sound that's not to loud. If you don't like the sound of an LT4 or LT1 than go by a Boxster or Z3 if you want a quiet cute sounding ride. Later Scott

Fugitive said:
If you don't like the sound of an LT4 or LT1 than go by a Boxster or Z3 if you want a quiet cute sounding ride. Later Scott
Click to expand...

Fugitive said:
No I don't think it's to loud. It just sounds sweet like a V-8 is supposed to sound! Conversation is fine, and yes I turn up my music and enjoy it! So I don't know why you guys are trippin so hard about resonace. It's a sweet sound that's not to loud. If you don't like the sound of an LT4 or LT1 than go by a Boxster or Z3 if you want a quiet cute sounding ride. Later Scott
Click to expand...

What's the possibility of you making a *.wav file of your Vette's exhaust sound and sending it my way ?

Most C5's sound very wimpy, especially the ones that have those terrible looking black exhaust tips.

But the Z06 exhaust sounds very intimidating and you can hear it from a long ways away.
Edmond. 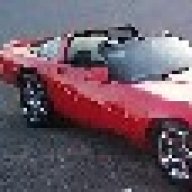 You say your muffler man welded two pipes in place of the resonator? So you no longer have any kind of exhaust crossover? From my experiances, and everything I've been told, this hurts your low end torque. If I'm right, and you end up wanting to get a crossover, look at Dr. Gas (he has a website somewhere). They make a great tandem x-pipe thats about 7-8 inches long, and will weld in right about where your resonator was, with some extra piping behind it to fit to your mufflers.


On a side note, I am running full length headers, with a single 3 inch cat, then my flowmasters. Its a real SCREAMER when I nail it. Its just as loud as the mustang I had with offroad (ie illegal) exhaust on it. However.....I can barely even hear the car when I'm in 6th gear going 65mph. I think the big variance is because it has a cat, so at low flow its pretty quiet, but its a performance cat, so when I push it, the exhaust doesn't hang around in the cat, it just goes.
Y

Thanks Trance! But I got different opinions on X pipes and cross flow. I know I don't have any data to support this but I'm telling you guys I know my LT4! And I have noticed a significant increase in low end torque with the resonator off and two seperate pipes in place. The difference is something major from 1600 rpm's to 2600 rpm's. And the sound is twice as good! And yes you can hear a throaty roar at every rpm but it's not loud till you get over 2000 rpm. I'm running Flow Masters, part of their system, I think their 80 series, crossflow mufflers. They sound great now that I took off the Flow Master resonator. Not tryin to argue and say your wrong just going with the cause and effect realty on my car! Anyway I looked in the resonator it's mostly straight threw yet it has two baffles in it. I didn't like it, glad I got rid of it! It really rumbles especially in the higher rpms! Later Scott
Y


Yellow96 said:
How do I communicate on the forum or check response from someone--folder next name-has black circle--will not open:bang :bang
Click to expand...

After you post on a thread, you'll receive an e-mail notification everytime someone else adds something to the thread.

Right below the reply message area that I'm typing in right now, there is a little box that you should check, it gives you the option of receiving those e-mails.

For me, whenever the CAC sends me an e-mail, I just click on the link and it drops me into the spot that I haven't read yet. I can also reply then because of "cookies" I think.
Edmond.

Contact me for the best prices on Amsoil.
Y

Thanks It's already checked :s

welcome fellow LT4 owner... glad to have you

Welcome to the CACC. Always good to see another LT4 owner, especially the GS owners. What number GS do you have? Mine is #328.

Welcome to the Corvette Action Center.

GM Recall - Ignition Switches and Airbags: Is the media portraying the whole picture?

My Baby is at Custom Image Corvettes