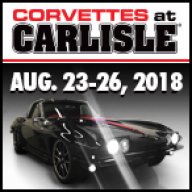 So, does anyone remember this car on the show circuit? Come see it on August 23-25 at the Carlisle, PA Fairgrounds during Corvettes at Carlisle! 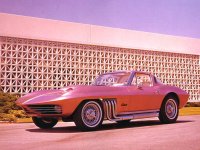 Corvettes at Carlisle has been wowing enthusiasts of all ages and backgrounds since the event’s debut in 1982. In the 30+ years since, tens of thousands of Corvettes have made their way to America's Automotive Hometown. While each of them are special in their own right, some are a little more special than others. Whether it's a Corvette that is one-of-a-kind, historically significant or something in between, it's a guarantee that each August Corvettes at Carlisle will play host to something very unique. This year, the trend continues with a very special 50th anniversary car on display; the 1963 "Asteroid" Corvette.

Special ordered new as a paint delete car by legendary speedboat racer Bob Nordskog, this '63 Corvette was delivered straight to the King of Custom cars George Barris of Barris Kustoms. The new C2 Corvette was already a fresh redesign from Chevrolet and Barris made a radical transformation and redesigned the car with an extended nose cone that had headlights positioned behind the bladed grille, custom headers exiting behind the front wheels, removed the split window, filled in the rear tail panel and opened up the rear wheel wells to accommodate big wheels. The paint job was out of this world and was painted in a heavy metallic copper finish that would blind you in the sunlight. This helped give the car the name "Asteroid" since it looked like it was on fire and moving at 1000 mph sitting still!! The interior design was just as wild as the exterior and done by Don Ferrara of San Pedro , California. It was finished in a pearl white Naughahyde complimented with copper accents to match the exterior paint.

This Corvette was built with dual personalities and was as fierce at the car shows as it was racing down the quarter mile. It was powered by a 352 cubic inch motor with 13:1 compression and fed through six chrome Stromburg 97 carburetors. Everything under the hood was either painted gold metallic or chrome plated and was the topper for an already over-the-top car. Dayton wire wheels were used for street duty and American Mags with race tires were used for track duty. Among its credentials are the following:

This creation was just one of many from the mind of Barris, who was recently showcased as part of the Barrett-Jackson auction in Scottsdale, Arizona. During the five-day auction, Barris saw his original Batmobile sell for $4.6 million during the Saturday night excitement. The Asteroid Corvette disappeared from the public eye nearly 50 years ago and now this out-of-this-world car is back and will trek to Carlisle this summer to be unveiled for the first time in many decades.

"The Asteroid was built by a true automotive icon and legend in George Barris." noted Corvettes at Carlisle event manager Lance Miller. "He made up some of the most creative automotive masterpieces in history and, fortunately for us, he restyled an amazingly vibrant and quite wild '63 Corvette for Bob Nordskog." Miller continued that "this Corvette is being carefully restored back to its original state as the Asteroid once was in '63 and we're excited to unveil it for the first time since the mid-'60s for our Corvettes at Carlisle attendees. This will be one custom Corvette that you won't want to miss, as a matter of fact you WON’T be able to miss it – be sure to come see what I’m talking about!" 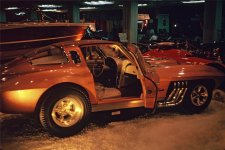 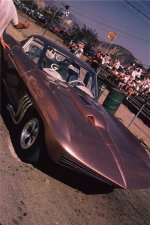 Check out some of the great events that Carlisle Events hosts each year - Corvettes at Carlisle is a must attend: CLICK HERE!

I remember it. I probably have some pictures around here also. It was in Rod and Custom at least once. I remember a special issue in '63 that was mostly features of custom '63 Vettes. As soon as these cars hit the showroom they were being customized. lots of them lost their split window feature even before the '64 came out and the one piece rear glass was available. Curved Plexiglas was used. Notice it shares a similar exhaust treatment to the GM styling cars of the day. Not all of Georges ideas were his.

I remember it too, Tom. I wasn't as "old" as you then (or now for that matter ), but I do remember seeing it in a magazine...probably was Rod and Custom. Love the Metal Flake paint.
2007 Atomic Orange Coupe Cashmere/black interior

I think that you caught up with and passed me many years ago. Remember, I was born on Feb 29th.

Press Release Corvettes at Carlisle to Giveaway a 2016 Stingray Coupe