Help! I'm ashamed of myself ! 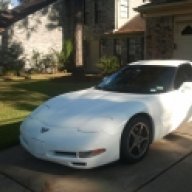 Beautiful vette, glad you're enjoying it.

I have 136k now on my '97. One of the few benefits of living in Houston is you don't have to worry about driving in snow.
“Nothing reduces the odds against you like ignoring them.” ​
-- Robert Brault ​
C

I M not ashmed

Bought a c-5 cpe several years ago. IDRIVE IT , Had 3:42 R&P,PRO-TORK converter KOOKS ETC . I LOVE IT .. I also love SMOKING !!! Only outside of vette!! I like michelin PS run flats. ITS really KOOL watch n TYRES 450.00 worth GO up n SMOKE...I HAD @ JOIN corvettes anonymouse!! LIFE IS SHORT ENJOY THE RIDE

These cars are meant to be driven. Why save it for the next person? You read about it all of the time, where someone picks up a low low mileage Corvette from someone who lets it become a garage queen. I always manage to take my car out at least twice a week to get the heart pumping (I call mine my time machine because when I'm in it, I'm 17 again! :L ) and contrary to popular belief, they don't melt.

My "new" 1998 rag top has just turned the clock and rolled it over in the seven digit category ..

The "seven" meaning that it just rolled it into the 7,044 range the other night. I'm going to have to start driving it to some museums.

Actually I got the car last year from a gal whose hubby bought it for her new as a Valentines present but he is big into restored Chevelle's and they spent most of their time either driving or towing his SS396 cars to and from shows. Their garage was more like a heated museum. In my 2002 I had on a few occasions put 1,000 miles in a single, very long day.

My biggest problem with my car being used is access. Because of my wifes two ratty cats, actually strays that she feeds, I can't keep the car outside even for a moment since the little b'tards would roost on the roof and then start using the top for a scratching post. That's what they did with my other car when I covered it in the driveway since they "roosted" on it for the engine warmth and their claws were leaving scratches in the gloss paint. But watching them claw holes in the brand new cover was enough to drive me nuts. So, the problem is depending on who is home, like one of the kids, I can't always get to open the garage to let out the Vette for it's exercise.

ad f'ing cats. Normally I don't hate cats but these two are a pain. One loves to get our dog's attention at about first light by sitting in the doorway and waiting for him to investigate her meows ... which of course sends him into a lather ... at daybreak.
Last edited: Aug 9, 2013

One of these will take care of your cat problem...

Can't for a few reasons. Wife likes the cats and feeds them but then pisses and moans about the other strays it draws in. Here, the dairy barns are going out of business and when they leave the farm to put up homes they usually abandon, my kids count was over 100 cats in her friends barn.

If you fire a shot in our township anymore, since all the New York anti gun a-wipes have moved in you would have the PD out here in a heartbeat.

She did agree she wouldn't let them in the garage like she did during the winter a few years ago. Those freaking cats used the windshield as a litter box. As long as she abides by the truce and keeps them away from the Vette ... well I took a long and loving look at the case the Ruger .44 is stored in just yesterday. She wanted me to pop a woodchuck eating her plants but my (internal smile), had the cats number on it. On the other hand my dad used to have a saying that fits for them ... "you aren't worth the powder to blow you up" .... ammo is getting expensive. I can't imagine what a Ruger round goes for these days when I head how much they were getting for a brick of .22's with some induced shortage because of hoarders? You don't use a sledge to put in a trim nail.
Y

Buy yourself a "Havahart" cage trap and catch those suckers and send them to the shelter. Had that problem in my neighborhood with people moving and leaving their cats behind but the trap worked great and a lot of them went to the pound.

YumaZ06 said:
Buy yourself a "Havahart" cage trap and catch those suckers and send them to the shelter. Had that problem in my neighborhood with people moving and leaving their cats behind but the trap worked great and a lot of them went to the pound.
Click to expand...

And GM Junkie cut me out of his will .

catbert said:
Drive them - don't save them for the next owner.

Unless it is for your kid.

vett boy said:
There is a cure for cats but last time I mentioned it two members resigned and a moderator and myself almost got banned

And GM Junkie cut me out of his will .
Click to expand...

This thread is beginning to sound like Groundhog Day- CAC style...

vett boy said:
there is a cure for cats but last time i mentioned it two members resigned and a moderator and myself almost got banned

and gm junkie cut me out of his will .
Click to expand...

Drive that thing until the wheels fall off - and then put new ones on it.
There's nothing like the feeling of waving at another corvette owner.
You must log in or register to reply here.