So I picked up my first corvette a couple months ago. A 90 z51. I've been going through it, there were a few things to do.

Anyway, a few weeks ago I got a check engine light. I used a paperclip to get the code and it was H25, high IAT temperature. So I ordered a new sensor since they're cheap. I pulled the old one today and realized they are quite a bit different. Now, these differences wouldn't normally bother me, but the problem is the connectors are different. The connector on my car won't plug into the new sensor.

Thinking I bought the wrong sensor (Maybe one for a zr1?), I went back to Napa with the sensor from my car to return the one I bought. When I got there, the guy explained that what I had pulled off my plenum was, in fact, a coolant temp sensor. He said you can clearly tell because of the way it's closed in and has sealant on the threads. I already know that the guy who worked on this before me wasn't that bright, but it'd be pretty difficult to get this wrong since you'd have to change the connector on the car.

I've attached two pictures showing the design of the two sensors and how the connectors are different. Could someone who has had their plenum off tell me what's going on here? Looking on Rock Auto and Napa, I see the one that he told me was a coolant sensor listed as both a coolant temp sensor and an intake air temp sensor. Weird! (Not that Rock Auto or other online parts stores are the most reliable source) 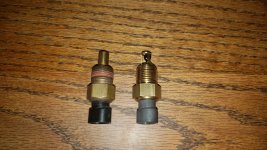 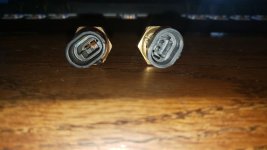 The NAPA dude should have listened to you more carefully. If you pulled the sensor shown at right out of a hole at the rear of the plenum flange of the left side intake runner assembly, it cannot be a coolant temperature sensor.

I have a hunch I know what's wrong, but you first need to answer the question above.
Last edited: Sep 4, 2020
Hib Halverson
T

The NAPA dude should have listened to you more carefully. If you pulled the sensor shown at right out of a hole at the rear of the plenum flange of the left side intake runner assembly, it cannot be a coolant temperature sensor.

I have a hunch I know what's wrong, but you first need to answer the question above.
Click to expand...

Sorry, I realize now it's not so clear in the pics, but it's the other way around. The one on the left is what I pulled out of my plenum. The one on the right is what I got from Napa. His opinion was that someone was putting it back together and put the wrong sensor in. What's your theory?
Last edited: Sep 4, 2020
H

NAPA doesn't know s**t.
Either their catalog data is wrong or they sold you an MAT for an '89.

Take the one back to NAPA and order off this page on RockAuto.com

The sensor you want is: ACDELCO 213928 {#15326386} Sensor; GM Original Equipment. There is even an image of the sensor which shows the correct "umbrella-shaped" female connector.

Just curious...when you read the H25 code, did you read that off the IP display?

Lastly, it is possible that simply replacing the sensor will not solve that code. There are two other possibilities: 1) a problem with wires and connections or 2) faulty ECM.

To diagnose those other possibilities, you need a scan tester and the FSM.

Thanks for the help, I'm in the south near Joshua tree. I just ordered that sensor off Amazon (free next-day shipping). It's listed as a multi-purpose sensor there. The pictures look just like the one I have including the connector and the part number matches Rock Auto.

I'm not sure what you mean by IP display. I read it off the dash where the speedometer usually is. Module 4 for ECM codes.

I really do need to pick up an FSM and scanner. I've been putting it off because of the price.

I figured it could be a connection problem, especially since the code was intermittent, but the connector seemed ok and 20 bucks isn't bad to eliminate the possibility of a bad sensor. I just looked up the ECM on Rockauto. They're not as expensive as I thought. Time will tell.

Thanks again for the help!
H

My family used to own a place in Palm Desert, so I've been around that area. Dated a girl in Yucca Valley once. Been to Pioneer Town a number of times. A favorite road of mine is from 29 over to Amboy.

I'd be curious as to what NAPA told you when you told them they sold you a sensor for an '89.

"IP display" is there the speedometer displays its digits. The H in the code means "history" which is another way of saying the fault has existed in the recent past but was not present when you read codes. If you saw C25 that would mean the fault was current. "CCM diagnostics" which is what you were using to get codes, is a good way to get faults. The advantage of a scan tester is being able to see the data list in real time and to be able to record short periods of data.

You can get Service Manuals for some model years from Zip Products.
Hib Halverson
You must log in or register to reply here.