<h3 align="center"><strike>40th</strike> 50th Anniversary Corvette Unveiled!</h3><img src="/images/columns/wheelspin/wheel_rob.gif" width="175" height="85" border="1" alt="wheelspin column" align="left" /><font size="+3"><b>O</b></font>n April 10, 2002, Chevrolet unveiled the long-awaited 2003 50th Anniversary Corvette to the public. Above all other models of Corvette, this was the one Corvette that owners and enthusiasts around the globe waited for with much anticipation.

For several months, rumors floated around the web about what the 50th Anniversary Corvette might be like. Everything from updated front and rear bumper designs to high performance, supercharged engine options were cited. Some of those rumors stated that the 50th would be the limited production, long anticipated "Viper-Killer" that would officially rip the fangs out of Dodge's 4-wheeled serpent and pay proper tribute to 50 years of production for Chevrolet's "plastic-fantastic". However when the curtain was lifted, and the veil of secrecy diminished, a collective gasp of disbelief followed by a sigh of dissapointment echoed across the internet like the tolling of a distant bell on a calm, foggy night. Many enthusiasts felt that the new marketing slogan for Chevrolet should change from the much publicized, "We'll be there", to "Where are you?"

If you look back through Corvette history, Chevrolet has never really made a big deal out of celebrating a production anniversary. Commemorative Corvettes have always consisted of special interior/exterior color combinations, unique wheel colors and special badging.

<a href="http://corvetteactioncenter.com/cgi-bin/archives/imageFolio.cgi?action=view&link=1968_-_1982/1978&image=78a.jpg&img=&tt=" target="_blank"><img src="http://corvetteactioncenter.com/images/gallery/1968_-_1982/1978/tn_78a.JPG" border="2" alt="Click for full image and details" align="right" /></a>The 1978, 25th anniversary Corvette edition (RPO B2Z) consisted of a special two-tone silver paint job (RPO 13/07). The upper half of the car was a lighter shade of silver than the lower half and a special silver stripe ran down the middle dividing the two colors. Sport mirrors (RPO D35) and special aluminum wheels (RPO YJ8) were required. Production was not limited as seen in the 15,238 B2Z-optioned Corvettes that rolled off the assembly line.

In 1988, Chevrolet celebrated the 35th anniversary of the Corvette with a special RPO Z01 35th Special Edition Package which was only available on coupes. This package included the following:

<a href="http://corvetteactioncenter.com/cgi-bin/archives/imageFolio.cgi?action=view&link=1984_-_1996/1993&image=93side.jpg&img=&tt=" target="_blank"><img src="http://corvetteactioncenter.com/images/gallery/1984_-_1996/1993/tn_93side.JPG" border="2" alt="Click for full image and details" align="right" /></a>In 1993, the Corvette celebrated it's 40th anniversary with a special RPO Z25 - 40th Anniversary Package. This package consisted of special ruby red exterior paint, ruby red leather sport seats, 40th anniversary chrome emblems on the hood and fuel filler door and special ruby red center caps on the wheels. As part of the package, RPO AC3 - Power Driver Seat was also a required option. Unlike the 1988 35th Anniversary Edition, the 40th Anniversary package was an option on coupes, convertibles and ZR-1s. A total of 6,749 1993 Corvettes were built with the special RPO Z25 package.

Fast forward to the 2003 50th anniversary Corvette, and you'll see that Chevrolet is not breaking from tradition. "Why didn't they at least paint it Gold" you ask? In recent years, Chevrolet has had problems with painting some metallic colors. In 1994, they tried to produce a Copper Metallic (Color Code 66) Corvette. Unfortunately, due to color inconsistencies, only 116 1994 units were built. (If you ever get to see one of these in person, the color is striking. It's definitely one of the most beautiful colors to ever come on a Corvette!) Then in 1998, they tried to produce an Aztec Gold (Color Code 58) Corvette. Again, due to color inconsistencies between the body panels and bumpers, only 15 units were built.

We recently spoke to someone that used to be a Paint Process Engineer at the Corvette plant in Bowling Green, Kentucky regarding the difficulty in properly painting some metallic colors; in particular, Gold. Basically, Gold colored metallic paints are difficult to apply properly due to the effects on the color caused by the orientation of the metallic flake combined with the tint. As you look at various body panels on a finished product, the color orientation can shift from part to part due to the orientation of the metallic flakes in the paint as well as panel orientation characteristics which are required for assembly line production. This directional orientation requirement can lead to a flatter flake orientation as the paint dries which yields lighter colored patterns in the final product. Hence the inconsistencies seen in some body panels that are painted this color.

Another reason may be due to the EPA requirements imposed on American automotive manufacturers vs. European automotive manufacturers. The amount of solvent allowed for use in automotive paints used on American built automobiles is less than the amount allowed in paints used on automobiles built in foreign countries. For a more complete explanation, please see <a href="http://corvetteactioncenter.com/tech/paint.html" target="_blank">Orange Peel as it Applies to Corvette Paint Quality</a>.

Up to this point, we've basically given a possible reason why the 50th anniversary Corvette was not painted Gold, but what about the high performance engine option that fueled so many of the rumors these last couple of years? As reported by the <a href="http://www.thecarconnection.com" target="_blank">CarConnection.com</a> in this <a href="http://corvetteactioncenter.com/forums/showthread.php?s=&threadid=7224" target="_blank">forum thread</a> regarding changes imposed at GM by Bob Lutz, "...the next-generation Corvette, codenamed C6, has been delayed, posing problems for the Vette’s 50th anniversary plans in 2003". Unfortunately, that statement lacks any clear explanation as to what those problems were and what effects they had on the 50th anniversary model.

If it were not for Bob Lutz, would a high performance engine have seen the light of production in the 50th anniversary model? Could that engine have possibly been a precursor to what we'll see as an introductory powertrain for the upcoming C6? Those are questions that may never be answered, but you can be sure of one thing: the 50th anniversary Corvette has officially been unveiled and it's still a special Corvette built to commemorate 50 glorious years of America's pride and joy. It may not be what everyone had originally hoped for, but the one thing that makes the Corvette more special that any other high performance marque are the people and events that revolve around it. Between June of this year and June of 2003, numerous <a href="/events/50thanniv.html" target="_blank">events</a> will be taking place around the country to help celebrate 50 years of Corvette. Be thankful and be proud of where the Corvette has come from and where it is today. Plan on attending one of these events and help celebrate the Corvette's 50th Anniversary. Happy Birthday Corvette! <i> - Rob</i>

Producing the 50th Anniversary edition was a "daunting responsibility" acknowledged (Dave) Hill in his seminar later that morning, fully aware that "the chat rooms are unimpressed" with the result. Hill, however, made a convincing defense of the car, both for its innovative technology as well as its appearance.
Click to expand...

They're aware alright, of the fact that many don't care for the anniversary edition in the 50th year.

I think a lot of people are extremely disappointed for a car that's basically cosmetic.

Does anyone in here think this will turn future Corvette people away?
Edmond. 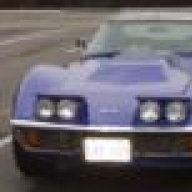 Great article! You really do your research.

Great article! You really do your research.

It's too bad they didn't get the C4 launched in '83, the C5 in '93, and a new C6 for the 50th Anniv. The C2 should have run more than 5 years and the C3 was produced way to long. Corporate planning leaves something to be desired, but the C5 is still too beautiful and current to mess with to any great extent. Just enjoy the party and the car the way it is. My '86 convertible still turns heads and is a kick to drive. Happy Birthday Corvette!
You must log in or register to reply here.